I’m slowly recovering from my bicycle mishap with a pick-up truck. I go to physical therapy three days each week, and I have graduated from a walker to crutches. Here is the latest on my work to open a panoramic photo exhibition at the local Museum of Art:

In one of the last scenes of The Princess Bride, Inigo Montoya and Wesley are framed in the window of Prince Humperdinck’s castle, about to leap to freedom. Inigo looks at Wesley and says, “I’ve been in the revenge business so long I don’t know what to do next.”

And Wesley replies, “Have you considered piracy?”

Yesterday I found myself thinking something similar while looking at my 58-foot panoramic photo in San Luis Obispo’s Museum of Art. I’ve been in the panoramic photo business so long I don’t know what to do next.

It was on a windy Saturday in August, 2012 that I made my first sketch of this event. Within a week I was pitching my proposal using my iPad to the museum staff. It would be a show of panoramic photos, with fencing, murder, capture by pirates, and even a photo or two. My proposal was accepted, and I was told that the museum had a full calendar for nearly two years – they would let me know. 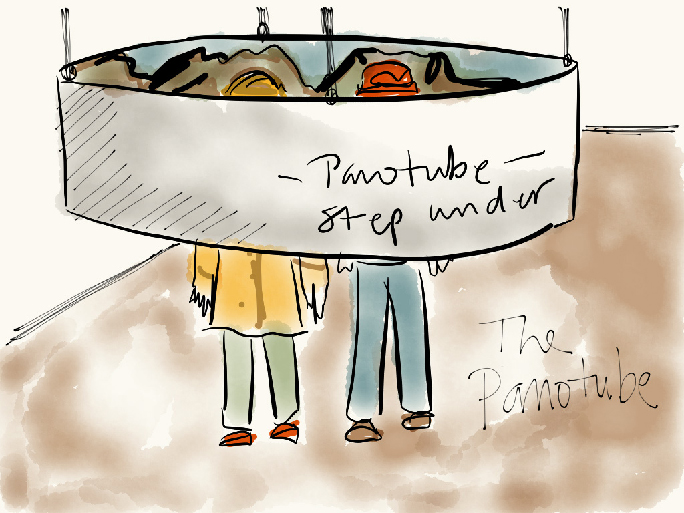 This was my iPad sketch of the Panotube, a cylinder inside of which an image would be printed. The tube evolved into a dome, and the photo evolved from a cylinder evolved into a spherical panorama printed inside a hemisphere.

Within weeks my exhibition was on that calendar, a mere 17 months in the future. So I started assembling the photos to exhibit, and I started taking new photos to include in the exhibit. I made a Master Plan, and I added everything to that plan that I could imagine: whom to invite, when to do publicity, when to get a banner printed, what color the walls should be, and much more.

At first the collection was all pixels in folders. I climbed the local mountains with my camera and my GigaPan rig. I scoured the collection at our local History Center, looking for historic images that I could replicate. I talked quietly among history buff friends to learn of the existence of old photos. I had seen a few here and there, and I knew that I could locate them if I kept at it.

In June of 2013 I began in earnest to gather the photos and other materials that would be in the exhibition. My Master Plan began changing color from black (planned) to green (completed but not mounted) to magenta (completely ready). I wrote copy, I designed a logo for the exhibition. I had bookmarks printed with the dates, and started handing them out. I was shameless! When I was in the hospital three weeks ago, I handed these bookmarks out to the nurses and X-ray technicians who were hustling me around the building. I didn’t hand any out in the ambulance, but I assure you it was only because I didn’t have them with me.

Last year I began work on a component of the show that I had originally conceived as a cylinder suspended from the ceiling. These cylinders would have panoramic photos printed on the inside. Though I had seen one permanent installation of a panorama inside a cylindrical structure, I had never seen one like those I envisioned. These would be soft panoramas, printed on Spandex fabric and suspended inside a tensile structure of tent poles. I drew sketches and dimensions, and I made a paper mock-up of such a photo. 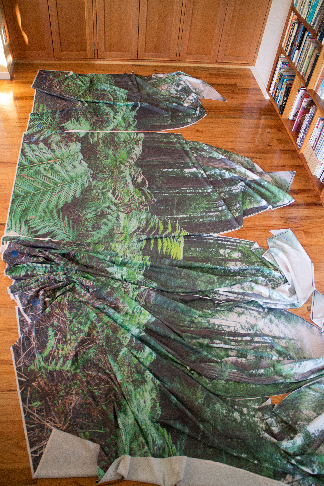 This was the Spandex fabric for the prototype Panodome laid on the floor so we could figure out which panel was sewn to what other panel.

The Panodome idea was born. I had taken a spherical panoramic photo earlier in the year at Montgomery Woods in Mendocino County. That image started at the sky and continued to the Bracken ferns at my feet. How cool would it be to transform the cylinder into a hemisphere with a spherical panorama printed on the inside? This had to be the solution to a problem no one had ever had before.

At an event called Pecha Kucha, held last April, we had a speaker who made a presentation about his career designing tents and backpacks for North Face, among others. This was my new best friend! I introduced myself, and soon he and I were in the early stages of making a prototype of my immersive domes.

By last June I had the first photo for the Panodome figured out. It is an interesting concatenation of a cylinder with a Mercator-projected cap. I carefully calculated how to get a panorama to behave like a globe, I studied Mercator projections, and I designed a template in Adobe Illustrator that would fit both the required format and my panoramic photos. 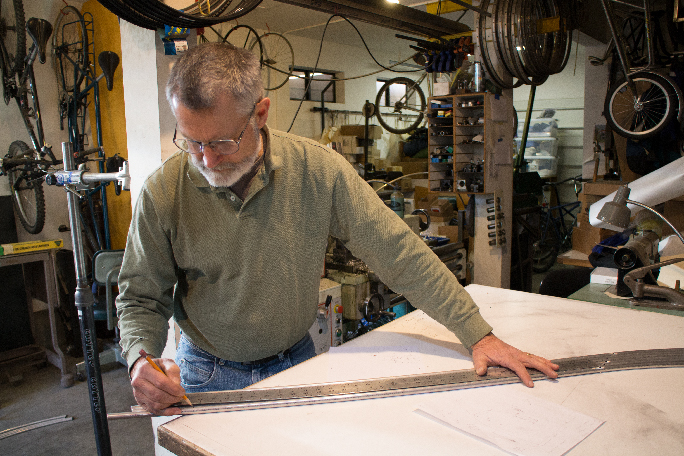 John Cutter in his laboratory. This is a wonderful environment where tents, bicycles and back packs are designed and built. Our Panodome project was the perfect fit for our combined talents and interests.

The tent designer is John Cutter, and we have a lot in common. We’re both bicyclists, both love to build things, both interested in Mercedes Sprinter trucks, and many other common topics which we discussed while we were cutting, bending, pinning and serging (a special sewing technique). I leaned on my friends at Voler, a maker of Lycra Spandex athletic clothing in Grover Beach, California. They have the technology for making dye-sublimation prints on Spandex, and I engaged them to make the first prototype dome. It probably didn’t make much sense to the workers at Voler to see these huge panels of trees and blue sky coming out of their machines last summer.

Meanwhile, I continued to gather and prepare to print the rest of the images in the exhibition. I built a precise scale model of the building and populated it with foam core walls. I made 1:24 scale miniature photos of my panoramas and glued it all together to get an idea how the exhibition would look. On several occasions you would have seen me crawling on the floor of the museum pushing a long yellow measuring tape between two surfaces, scratching notes on my clipboard.

The largest of the photos would be 16 feet long, and about six feet tall. Several others would be 14 feet long, a few more would be about 13 feet long. I had to develop a method for splicing foam core together to accommodate a 14-foot print. I ordered and received a pallet of 4 x 8 foot self-adhesive foam core. It arrived by truck one day. The driver didn’t know he was delivering to a residential address. Without a fork lift we couldn’t unload the material, so he took it to his company’s loading dock and I picked it up later with a borrowed pick-up truck.

In November, working to my grand plan, I began to print the images for the show, ticking them off the list as I went along. I printed all the 60 and 72-inch prints first because I could print and mount those by myself on our dining room table. After coming up with a solution for putting two (or three) sections of foam core together, I tried my hand at one of the 14-footers. The first was a complete success.

My living room started to be filled with these prints, and we lost the use of most of our downstairs living area while I made my exhibition. 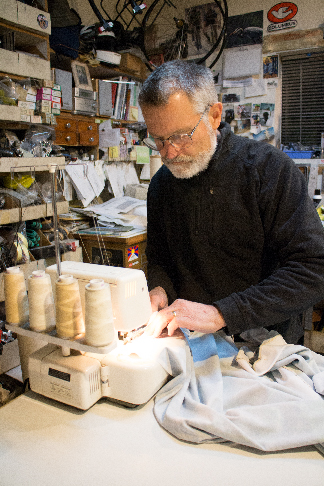 Here, John serges a seam into the prototype Panodome. The serger is a four-thread sewing machine that makes a stretch seam while simultaneously shearing the waste off the edge of that seam. These machines are used on all sorts of stretch fabrics, and they are handy because they don’t use bobbins.

Also in November, John Cutter and I finished the first Panodome, and we stood outside it and admired it. Then we climbed inside it and admired it. After a few adjustments, we modified our patterns, and I prepared the final two images for printing. These two were off to Voler in mid-December. On the fourth of January I picked up a long roll of printed fabric, brought it home, and began the process of cutting the Mercator shapes. 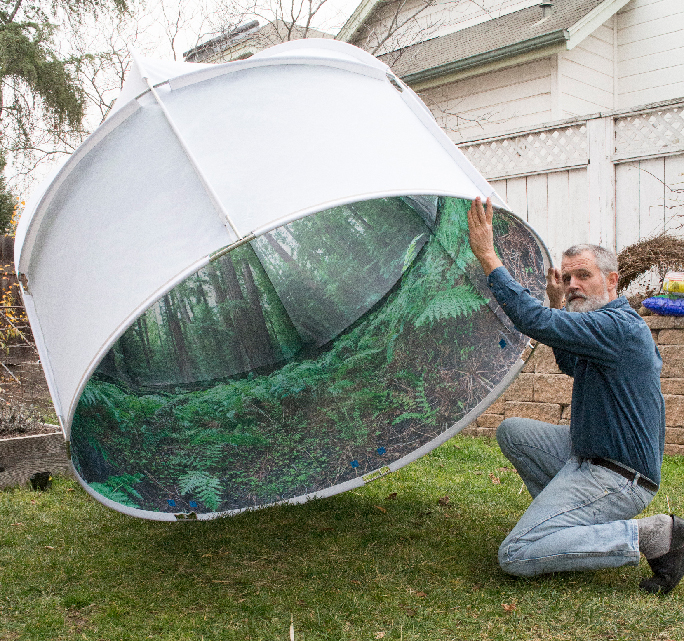 John Cutter with our completed prototype Panodome. A few small changes were made, then we began in earnest to complete the final two domes.

My living room filled. A pallet of catalogs and posters arrived from the printer. I filled our guest bedroom with boxes of printing. This was a room already bursting with 4 x 8 sheets of self-adhesive foam core standing on-end.

My wife and I were down to two places at the dining room table where we could eat. These rest of the house was taken up with photographs.

Everything was going according to plan when I was hit by a truck on my way to work at the university on my bicycle. Lying on the pavement, I thought about approaching sirens, my deadlines and my panodomes, and the excruciating pain coming from my mid-section. Was my hand broken? How would I get the 14-foot prints to the museum? I never lost consciousness, but I was worried that I might lose my mind.

But the show had to go on! I was hospitalized, so my dear friend and collaborator on many projects, Catherine Trujillo stepped forward and said, “I’ll take over the show. You just get better.” I agreed. 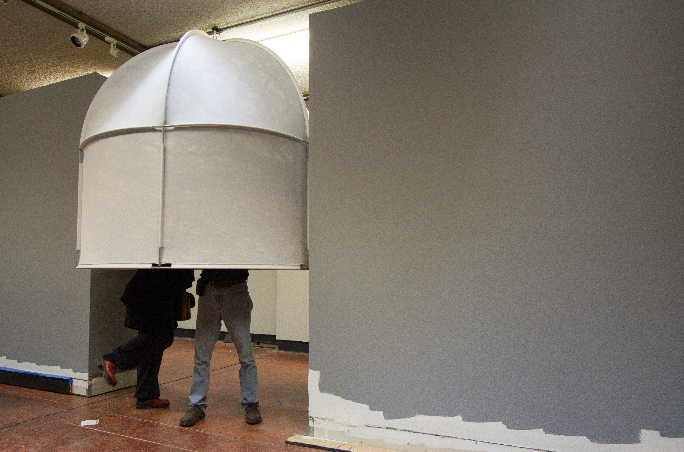 Just like the original sketch of the Panodomes, visitors’ feet are visible at the bottom of the dome at the Museum. This is one of the two final Panodomes in the exhibition. Images will be mounted on the adjacent walls today.