Almost a year ago I finally found the best location for taking a photo of San Luis Obispo. I had been climbing the local mountains seeking the perfect spot. I scoured available historic photos to see what other photographers had done. Three times I hiked up the side of Cerro San Luis Obispo, making GigaPan images. The view from that mountain is really hard to beat.

The other problem I had was a lack of rain. We have been suffering from a drought for several years here, and what little green we had last spring wouldn’t last. I knew I had to get the photo as soon as possible or the mountains would turn golden brown. But the green is so much nicer, I wanted to get the photo with green hills in the background. 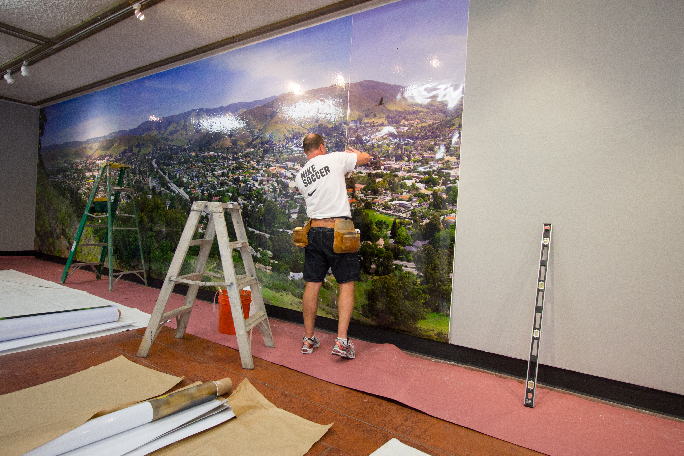 Wallpaper genius John Cleek puts up a panel in my photo entitled Daniel’s Point. He’s working on panel 8 here (out of 17). He would finish the next day.

Finally, on April 13th, the magical combination of clear skies, green grass, and the availability of my friend Megan occurred. I loaded my GigaPan onto my back pack, grabbed two charged batteries for the camera, assembled my gear and hiked up the side of the mountain to my secret spot. I was ready!

Megan’s part in the operation was to appear in the photo. I purchased a Wenda costume from the Where’s Waldo web site (Wenda is Waldo’s girlfriend), and I gave that to Megan. On this day she rode her bicycle to the first spot we had agreed on, and stood there until the GigaPan swept past. “Sweeping” is an exaggeration here, as the GigaPan doesn’t go very fast. I needed over 1,500 photos to complete this image, and it was going to take more than an hour to get them. I think the count of images in each row was 95. 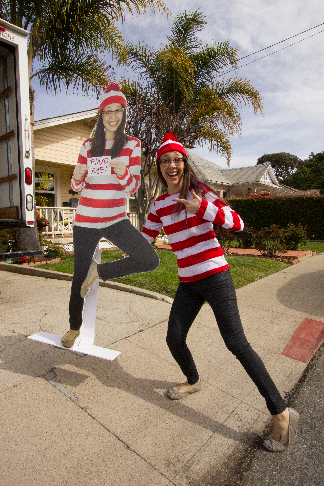 Here is Megan holding Megan. The stand-up foam core version of her will be in the corner of the museum inviting patrons to find her in the big photo.

After the first image with Megan in it, she moved to the second location and I captured her there. But the third location was problematic because it was in the same horizontal row as the second. Megan pedaled across town to the third location while I paused the GigaPan in anticipation of her arrival. When she got there I started it again, and got her in the final location. Then she went home and I kept shooting for another 45 minutes.

This image turned out well. It is my signature photo for the exhibition, and it appears on the long wall at the San Luis Obispo Museum of Art 58 feet 7 inches long. It’s ten feet tall. I printed this image in 17 vertical sections, each 44 inches wide. If you look back into my December blogs you will see several dealing with the large file limitations of Photoshop and of the Epson printer. You will also see how I solved the problem by purchasing a commercial driver for the Epson printer that overrules all limitations (that product is called Mirage).

When the 17 panels were printed, I had them laminated with a very thin polyethylene gloss laminate material. This was to prevent the ink from being dissolved by the water-based wallpaper paste used to mount the images on the wall.

On Tuesday morning, my friend John Cleek arrived with his associate Rob to do the installation. He had spent part of Monday coating the wall with a lacquer-based paint that acts as a resist to the water-based adhesive. This will allow us to remove the photo at the end of March when the show is over.

John and Rob slowly and methodically coated each of the panels, then applied them to the wall. I stopped by a couple of times to check on their progress. By Wednesday afternoon the photo was fully installed, and it’s really, really large! 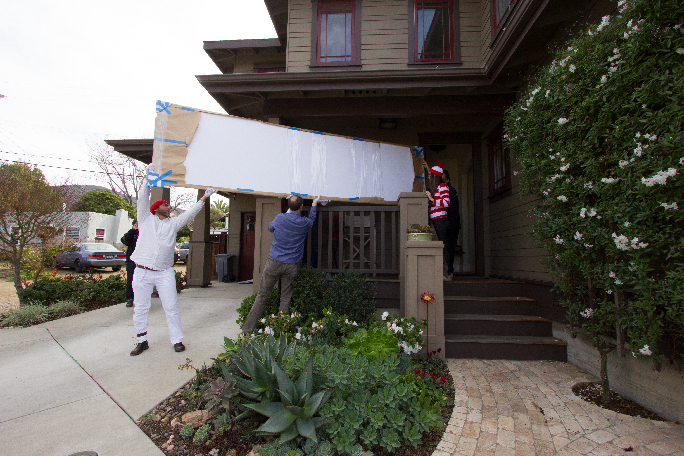 Several of the 14-foot photos emerge from my front door and out over the bannister. From there they were loaded into a box truck for the short trip to the museum.

On Tuesday morning a team of friends arrived at my house to help me get the photos out of the house. I had been printing and mounting them since November, and I had filled the living and dining rooms completely with photos. Several of these are 14 feet long, others only six. What part of the room was not occupied by my huge photos was taken by the printed poster and catalog I had printed for the exhibition. My wife and I spared two spots at the table where we could have breakfast.

I confess it had never occurred to me how to get the prints out of the house. It just wasn’t on my list. I was completely absorbed by printing and mounting. Transport? What transport? Fortunately my team of volunteer friends rallied and figured out a way out, over the bannister on the front landing, and out to the driveway. The group packed everything in foam core, wrapped it up in kraft paper, and built special foam core corner protectors to ensure that the fragile photos would not get dinged on their way out of the house, or into the museum. 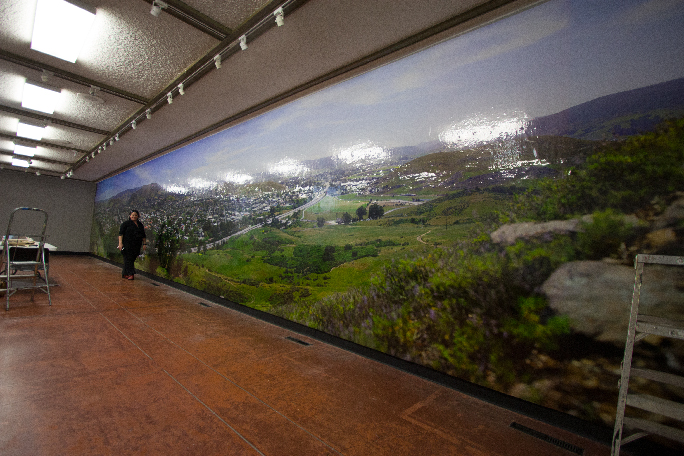 This is my friend Cate standing next to the 58-foot Daniel’s Point panorama. It’s great to see it printed and installed. Prior to this, I had seen it on my computer display only; I have never attempted to print it before this.

A photographer from our local paper came over to document the move, which as a photo subject didn’t push the needle very far on the excitement scale. And, the museum provided a rental truck long enough to accommodate the long foam core mounted photos. I was out on the street, observing from my wheelchair. My dear friend Cate Trujillo had taken over responsibility for the show, and I was genuinely grateful for her help. In my condition I am in no condition to accomplish much, and moving the photos would have been very difficult for me to coordinate.

They loaded me and my wheelchair into a car and we drove the dozen blocks to the museum. By the time we got there, and got me out, the photos were all inside the building. There was hardly anything left for me to do. The mounting of the images is being handled by the museum staff. 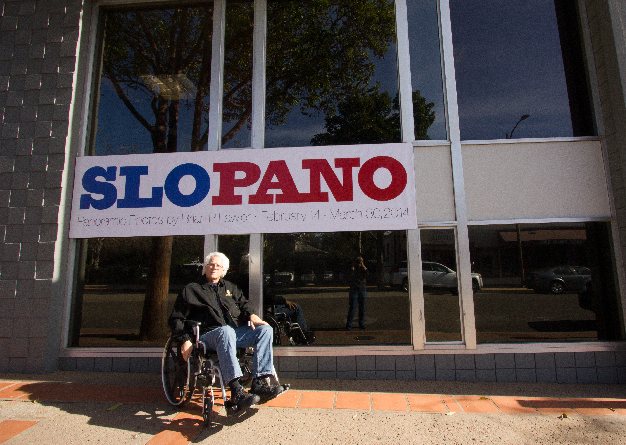 …and here I am outside the museum by the sign advertising my exhibition. It has been 18 months in the making. I’m excited about the opening; I doubt that I’ll sleep much tonight.

And, as I wrote in yesterday’s blog, the panodomes were assembled and installed with special steel brackets that attach them to pairs of ceiling beams in the building.

I am quite confident that my 58-foot photo is the largest in the history of the city, and I am even more certain that the Panodomes are the first anywhere. The whole exhibition is coming together nicely. I just hope that they have really good cheese and crackers at the reception tomorrow evening!