I was visiting the Warbirds museum at the Paso Robles Airport early last month with my friend Jim. This museum has a collection of old airplanes, trucks, and other items related to the military from the 20th century. It’s an all-volunteer organization.

As we got out of Jim’s car and I started to look around, I noticed the hulk of a Coast Guard helicopter that looked familiar to me. I once served in such a machine, as a photographer while I was in the U.S. Coast Guard Reserve. It was interesting seeing one again. I walked over toward it, and I took a couple of photos. 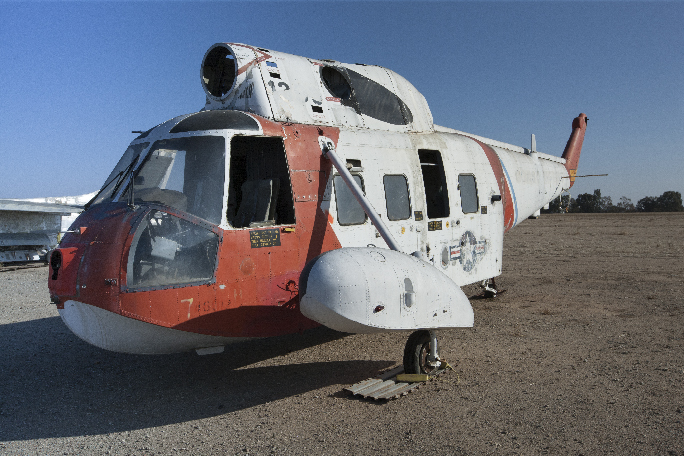 There were some men and women standing by the nose of the helicopter talking about it, discussing the fact that this model featured a boat-shaped hull at the base of the fuselage. Yes, I said, they could float in water, but it was the last thing on Earth a Coast Guard pilot would do with his craft. If they ever went into the water (I never saw that happen) they would have to be completely overhauled before being put back into service.

I walked around the right side, and read on side by the sliding door SAN FRANCISCO. What a coincidence! This was not just any Coast Guard helicopter; this was one of two machines I served in as an enlisted man in that service! I once sat in that open door, shooting photos of waterfront facilities on the San Francisco Bay, listening to the pilots talk to air traffic controllers and to each other.

Almost all the photos I took from this helicopter and her sister ship were turned over to the Coast Guard when I landed after each mission, so I don’t have much “evidence” of my service in these wonderful craft. But, I do have a strip of six frames of Tri-X black and white film that I somehow took with me one day in 1973.

These frames are not related to the shoreside documentation project. Instead they document a rescue we performed while we were out that day when a private pilot made an emergency landing on a beach near Pescadero, California. The Coast Guard was alerted by the Highway Patrol, and since we were already aloft, working along the Bay on the south of San Francisco Airport, we diverted to Pescadero and landed on the beach to investigate the problem. 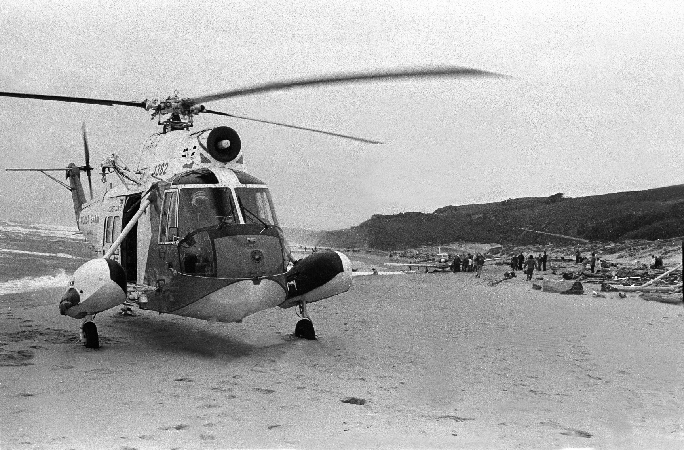 This was our Coast Guard helicopter on the beach at Pescadero, California. In the background you can see the small plane also on the beach, surrounded by people who came out to see what was happening. The pilot of our helicopter never shut down the engine, leaving the rotors turning the entire time we were on the beach. This was a routine measure to prevent a problem starting the engine with onboard batteries.

The emergency landing was forced by a problem that occurs occasionally in small planes – the pilot ran out of fuel. He had claimed engine failure on the radio, but when we arrived, the man was begging for some aviation gas so he could take off and fly back home. Probably not engine failure!

The Coast Guard did not routinely carry AvGas. Sikorskis run on Jet A, which is similar to kerosine and diesel fuel. A second Coast Guard helicopter was summoned with five gallons of AvGas, and it arrived shortly after we did. Soon, the pilot of the small plane was making efforts to have people push his aircraft to the hard-packed sand to attempt a take-off from the beach.

The copilot of my helicopter walked over to talk the pilot out of this folly, suggesting instead that he have the plane towed across the sand to the nearby paved highway, and attempt the take off from there.

At that point, both Coast Guard helicopters returned to our regular duties, all of us wondering how the event on the beach would end. I never read about it in the newspaper, so I must assume that the careless pilot must have successfully gotten his plane to the road, or perhaps he had it disassembled and trucked back to his home airport. That would have been the sensible thing to do.

It was fun to see “my” old helicopter. It made me slightly nostalgic, and I confess to being rather surprised at how primitive it looks compared to the sleek Jay Hawk helicopters used by the Coast Guard today. This was a trusty machine, and it served us well. It’s nice to know it now lives in my county.

Brian Lawler is an Emeritus Professor of Graphic Communication at California Polytechnic State University, San Luis Obispo. He writes about graphic arts processes and technologies for various industry publications, and on his blog, The Blognosticator.
View all posts by Brian Lawler →
This entry was posted in Adventures, History and tagged Coast Guard, Coast Guard helicopter, helicopter, HH51, Sikorski, USCG. Bookmark the permalink.