Details on scanning film with the Epson scanner

In two earlier blogs I described how I set up a large tabletop arrangement to scan historic panoramic negatives on my Epson Perfection scanner.

You could read this as a criticism, but I would rather think of it as a tech note: The Epson Scan software is too smart for its own good. It always tries to make the best possible image as it scans – one that has nice color, has proper white balance, and which has the right amount of adjustment for shadows and highlights. Epson’s engineers have worked overtime to make their scanners effective for customers. But, in spite of those intentions, sometimes you will want to overrule the automatic settings that are generated by Epson Scan.

When I was scanning the historic film, I needed to overrule the auto settings on every negative. It’s not that Epson Scan did it wrong, it was that their software was jumping to conclusions about the film, the unexposed area around the film (this has surprising effects on exposure), and the tonality of the film, conclusions that were not correct.

I learned how to manage tonality with just a few test scans, and here are some tips for those of you who might be interested in scanning film on these machines.

First, set up the scanner with the Film Area mask in place, or any of the other film holders that came with the scanner (this applies to those Epson scanners that have the ability to scan with backlight). Then position your film on the scanner bed, emulsion-up (though I have discovered that it doesn’t matter which way the emulsion faces).

Once the film is in place, run a Preview scan, set the cropping and the resolution. Epson Scan will do an auto-exposure adjustment to the image as soon as the Preview scan is complete. 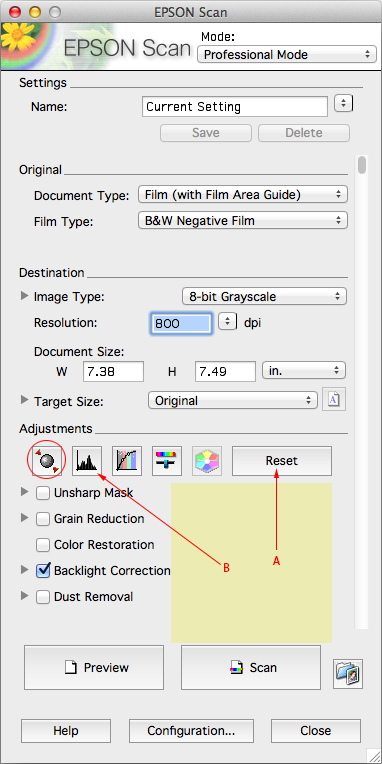 This is the Epson Scan software. Circled in red on the left is the icon that indicates that the software has applied auto-exposure to your scan. When I was scanning my panoramic films, this was not appropriate, so I would turn it off and then adjust exposure manually using: first, Reset, which turns off the auto-exposure, and second, the Histogram control, shown at B, above.

Immediately hit the Reset button in the Epson Scan control palette. This will change the left-most icon in the control icon list, making the little red arrows move away from the circle in the middle, indicating manual exposure (or perhaps more correctly: manual everything). 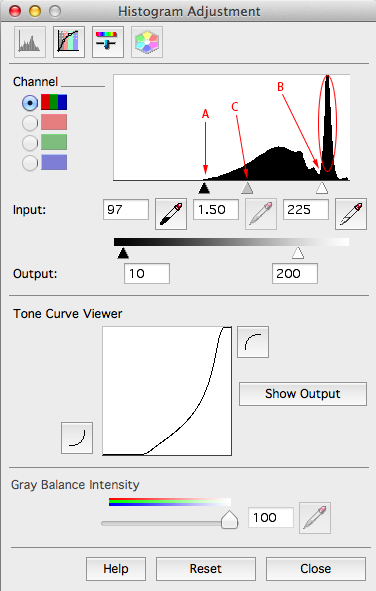 A indicates the darkest part of the scanned information. Move the left-most Histogram arrow to the edge of this point on the data. Second, move the right-most arrow, called Highlight, to the left. In this case I had to slide it to the left of the very light data shown in the encircled area. This area represented correctly measured parts of my film that were being valued incorrectly. Parts of the negatives where the emulsion was missing were causing this, a false reading of the highlights. Once the ends are placed to your satisfaction, adjust the center slider to get a reasonable image; the Preview window is interactive.

Once you have turned off the auto-exposure, click on the Histogram icon, which will bring up the Histogram control window. In this window, which behaves very similarly to the Levels control in Photoshop, you can adjust the tonality of the Shadow, Midtone and Highlight. Slide the Shadow slider from the left to the first significant edge of the histogram data. This will darken the shadow areas of the image (the Preview is interactive). Then slide the right-most arrow to adjust the highlights. This will affect the lightest parts of the image – the highlights. In the example here, there is a large body of data to the right of my highlights slider. This represents the clear areas of my film where the emulsion was damaged, and is now missing. The clear areas there are less dense than the highlight that remains in the emulsion (film base plus “fog”).

Once these adjustments are in-place, and if you are scanning sections of a single piece of film to be rebuilt later with Photoshop’s Photomerge controls, you cannot click anywhere except the Scan button in the Epson Scan control palette. If you do, the software will revert to auto-exposure, which will spoil your work (unless you had the good sense to write down the Levels values you set in the Histogram control palette).

I accidentally clicked outside the Scan button a few times while working on my panoramic negatives, and had to start a few of my scans over again as a result. This was tedious.

If you’re careful in setting the points on the Histogram, you can make extraordinary scans using the Epson scanner and the Epson Scan software. I am sure that VueScan and Silverfast can both do similar things with tonal controls, but I have not tried those products with the scanner that I own.

4 Responses to Details on scanning film with the Epson scanner