Last Friday I was privileged to be taken on a tour of San Luis Obispo County’s nuclear power plant. This tour was arranged by the local Chamber of Commerce leadership training group, and I was included by being related to my wife, who is a graduate of that program. 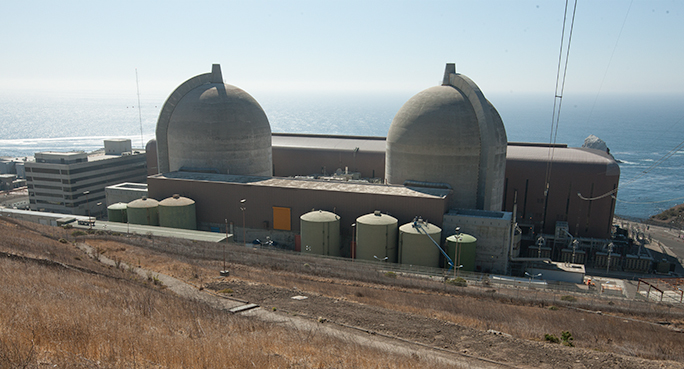 Diablo Canyon nuclear power plant, with its twin reactor buildings in the foreground and its gigantic generator building in the background, followed by the Pacific Ocean. On the right you will see one of the three conductors of the 550KV lines coming out of the plant and heading off to the power grid in California’s central valley. The plant is about eight miles from my home, as the condor flies.

Tours of the plant, now California’s only operating nuclear generation operation, are fairly common. Getting inside with a camera is not. I was granted permission to photograph the group on the tour, and was excited to be able to document our adventure through the huge energy operation.

The tour was led by John Lindsey, Corporate Relations Representative of Pacific Gas & Electric, the public utility that operates Diablo Canyon. Lindsey is something of a local hero because he writes a regular column in our newspaper about weather, and a host of related topics. He really knows his stuff, and he was both entertaining and informative about the plant. Instrumental in arranging for the leadership group to get the special tour was Kristin Inman, a communications specialist at the plant. 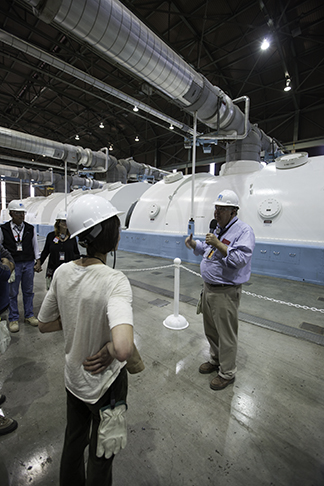 John Lindsey, PG&E Corporate Relations Representative, explains the operation of the low-pressure turbine behind him. Steam from two nuclear reactors behind us power the turbines, which generate about 20 percent of the company’s electricity.

Our group was bussed from the firm’s information center near San Luis Obispo to the plant site near Avila Beach, and accessible only by a private seven-mile road that runs along the gorgeous bluff north of Avila, to Diablo Canyon. The utility is steward to over 12,000 acres of land along the Pacific Ocean; the plant occupies about 1,200 acres of that land.

On arrival, we donned our PG&E hardhats, put on our lexan safety glasses, and clipped a pair of leather gloves to our belts. We had all been vetted a couple of weeks earlier by the company’s security people, so the first part of being allowed inside was already done. We entered the building’s security area and checked in, one by one, and were issued individual proximity cards that identified us as we passed through doorways in the plant (and I presume would have alerted security if we approached the wrong door). 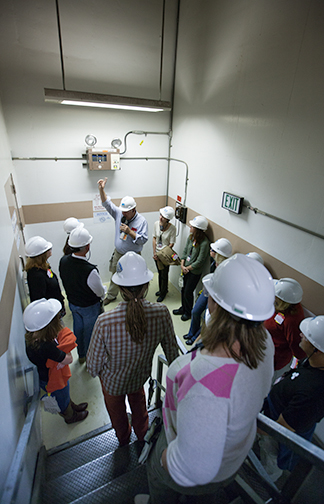 Stairwell briefing: Mr. Lindsey explains the system in the plant that removes water from the steam, and re-injects that dry steam into the turbines. The stairwell was a good place to talk because the plant is so noisy. We were all wearing amplified earpieces that delivered his voice while protecting us from ambient noise.

I had my camera gear run through a standard X-ray machine without difficulty. I walked simultaneously through a metal detector. Then I was asked to step into a second security machine. The guard, who was wearing an AR-15 assault rifle across his chest, indicated that I should hold my hands up in the air while the machine puffed air toward me to detect nitrates.

I held my breath.

I had been handling historic panoramic film for the past two weeks, scanning it for a presentation I am making in February (see my two previous blogs). All of this film is cellulose-nitrate film (the dangerous stuff). I wondered, in spite of my having taken a shower and changed into business clothing, if the puffer machine would detect my contact with the nitrate film.

I held my breath longer, composing my explanation in case the red lights went on and the sirens started blaring.

And nothing happened. The green lights went on, and I responded to a recorded voice (quite similar to Siri’s) saying, “Please step out of the machine.”

The tour was fascinating. We walked through the huge turbine generator building, which is the source of about 20 percent of PG&E’s electricity. The turbines are fed by steam from two reactors (after a heat-transfer process) in adjacent buildings that we saw only from the outside of the plant. We walked down stairs, and went up elevators from level to level, learning about high-pressure steam, and dried steam that is reinserted into the low-pressure end of the turbine. And, we took a group picture next to the Exciter, which was exciting!

PG&E’s Lindsey and Inman were extraordinary tour guides. They gave us all of the information they thought we would want, and they answered all the questions our group asked – including the uncomfortable ones about the plant’s proximity to the ocean, and the likelihood of a tsunami damaging the structure, its pumps or related equipment (à la Fukushima Daichi). All of their answers were candid and given with only a hint of nuclear energy industry spin. Bravo!

I left impressed by the plant, by the extraordinary work done by PG&E to increase security, and to triple the cooling water back-up systems to insure against events like the one that hit Japan. They make a lot of electricity there, and I am using a tiny amount of it right now to write and publish this blog.

And I’m glad that their puffer machine didn’t stop me from going on the tour. Perhaps it makes exemptions for historic film.

Brian Lawler is an Emeritus Professor of Graphic Communication at California Polytechnic State University, San Luis Obispo and was a Guest Professor at Hochschule München from September, 2021 to September, 2022. He writes about graphic arts processes and technologies for various industry publications, and on his blog, The Blognosticator.
View all posts by Brian Lawler →
This entry was posted in Adventures, Business, People, Technology and tagged Diablo Canyon, Diablo Canyon power plant, energy generation, nitrate film, nuclear energy, San Luis Obispo. Bookmark the permalink.