The Bishop Peak Portrait Project is very nearly up!

For the next five months I’ll be living in Munich and teaching at the Munich University of Applied Sciences. I arrived here a week ago and I had my first classes this week.

But, last week, before leaving San Luis Obispo, I saw the finishing touches being applied to my Bishop Peak Portrait Project. This is the year-long photographic project that I did to document San Luis Obispo’s signature mountain. It will be installed in the Baker Science Center in the coming weeks, I hope (it’s just a matter of being installed on the wall now). 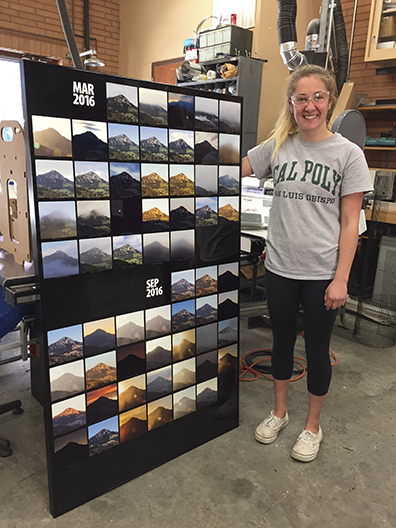 Emma Wilson, my assistant on the Bishop Peak Portrait Project, stands with the first finished panel: March, and September, 2016. Emma had just finished installing the aluminum photos into the display panel. There are six of these panels that will soon go up in the Baker Center at Cal Poly.

This project has been in my blogs for the last 15 months (you can start reading about it here). It involved putting a time-lapse camera on the roof of the Kennedy Library at Cal Poly, and taking a photo of the mountain every five minutes for a year. That year began on March 1, last year and ended on February 28 this year. In the middle I took about 70,000 photos, and culled them down to a smaller 40,000 photos from which I picked the best image each day and had them printed on aluminum plates (about 1/16 inch thick).

I machined these photos on a CNC router to precise dimensions, then inserted into large aluminum panels I cut on the same machine to accommodate the images.

Cal Poly COSAM technician Rob Brewster aligns one of the photos in position on the September panel. We used an amazing double-sided adhesive to hold the photos in place.

I was originally planning to put the panels up, and then slowly populate them in-place until the project was complete, but technical difficulties interfered with my plans, and it ended up taking almost the entire year to get those panels cut and ready for installation. Eventually we decided to put the photos into the panels first, then install the panels – complete – on the wall of the building.

In the weeks leading up to my departure for Germany my student assistant/right-hand-woman Emma Wilson helped me get to the finish line. She and I had been working for several months to prepare the panels and the photos, and get the pieces in place for completion. We worked with Cal Poly technicians Rob and Doug Brewster who figured out how to finish the project and get the panels installed.

It came down to the wire. We were putting photos into the panels on Monday, March 6, and I boarded the plane to Germany on Friday, March 10. I saw the completed panels before I left. Emma, Doug and Rob finished those I was unable to do myself (my classes interfered with the photo project!).

When I return from Germany we will have some kind of an event to mark the installation. I’ll announce it here.

To read all of the entries about the Bishop Peak Portrait Project, start here.