It must be a Mirage!
My large file printing problems are solved

Following this blog, you have been exposed to the trials of printing very large photos on a wide-format Epson ink-jet printer.

I have been feeling like a beta tester the last month or so, discovering all of the reasons why a certain file can’t be printed. Reading Adobe’s lame error dialogs that ask you to contact your printer vendor (Adobe certainly doesn’t want you to contact them, god forbid!).

I learned that Photoshop doesn’t like to print jobs with more than 32,767 pixels in either dimension, and then I learned that Photoshop won’t correctly print any image greater than 2GB, and then my Mac Mini’s hard drive failed on Christmas, requiring me to start over again on printing technology, discovering that some small change in Epson’s printer drivers doesn’t like photos larger than about ten feet long.

When the old Mac Mini came back repaired, I reinstalled the (newer) Epson printer drivers, and it seemed OK. I was able to print ten-foot photos without difficulty, but when I tried to print a 14-foot panorama, the printer huffed and puffed, then it advanced three very expensive feet of Epson Luster paper, cut that paper and dropped it on the floor. Thinking this might just be a quirk, I restarted the programs on the Mac Mini, sent the job a second time, and it generated another three feet of blank paper and dropped that on the floor. This was starting to look like a trend.

I need a solution, and time is running out. I am now down to four weeks to my show’s opening reception, and I am feeling the heat of the deadline.

I wrote to my friend Dan Steinhardt at Epson. He’s knowledgeable about these things, and I complained to him (sorry, Dano), and he recommended that I use a popular Windows-based RIP called QImage on my Mac, with Bootcamp and a copy of Microsoft’s Windows 7 operating system, and I gave that some thought.

Changing RIPs in the middle of a photo exhibition didn’t appeal to me, because RIPs affect the way dot patterns are drawn on the paper, and I worried that my prints might look different. I was also concerned because I am brain-dead when it comes to configuring and repairing everyday problems on Windows computers. I didn’t want to have to add that skill to my résumé on short notice.

So I bumbled on, making some pretty big and awfully expensive mistakes as I prepare for my photo exhibition. I printed all the easy prints – those under ten feet in length, and I printed a few of the informational prints just to get them done. But the big gorilla in the room was the need to print several very large panoramas in one piece each. These range in size from 14 feet to just over 18 feet in length.

Yesterday, the Fairy Princess appeared to me in a dream (she sometimes empties the dishwasher late at night) and reminded me of some software from Germany that I learned about at the GATF Color Conference in Scottsdale, Arizona. I had picked up a brochure about it…. What was its name?

And then I remembered it was a Mirage! I looked it up on the Interwebs, and within an hour I was in possession of a 14-day test trial of Mirage software for my Epson printer. Not just “in possession,” I was running with the new software in less than an hour.

Mirage is not a RIP. It is a better printer driver than those that are supplied by Epson. It is available in several versions varying in price – but not in features – according to what size printer you plan to run. The version for my 44-inch Epson 9600 is $648.91. If this were not a solution to my problems, I would have a hard time spending that much money for this.

By comparison, Bootcamp for the Mac is free, a copy of Windows 7, Home Edition is less than $100.00. The Windows QImage RIP I would have needed is $69.99, and the time I would have spent getting it running is unknown. So, I am spending much more to solve the problem – permanently – on my Mac Mini than I would have spent building the Windows partition and running the Windows RIP. But, I am in more familiar territory here, so I can justify the expense based on the fact that I need the Mirage software for many future jobs, which will pay for it many times. (Good justification, eh?) 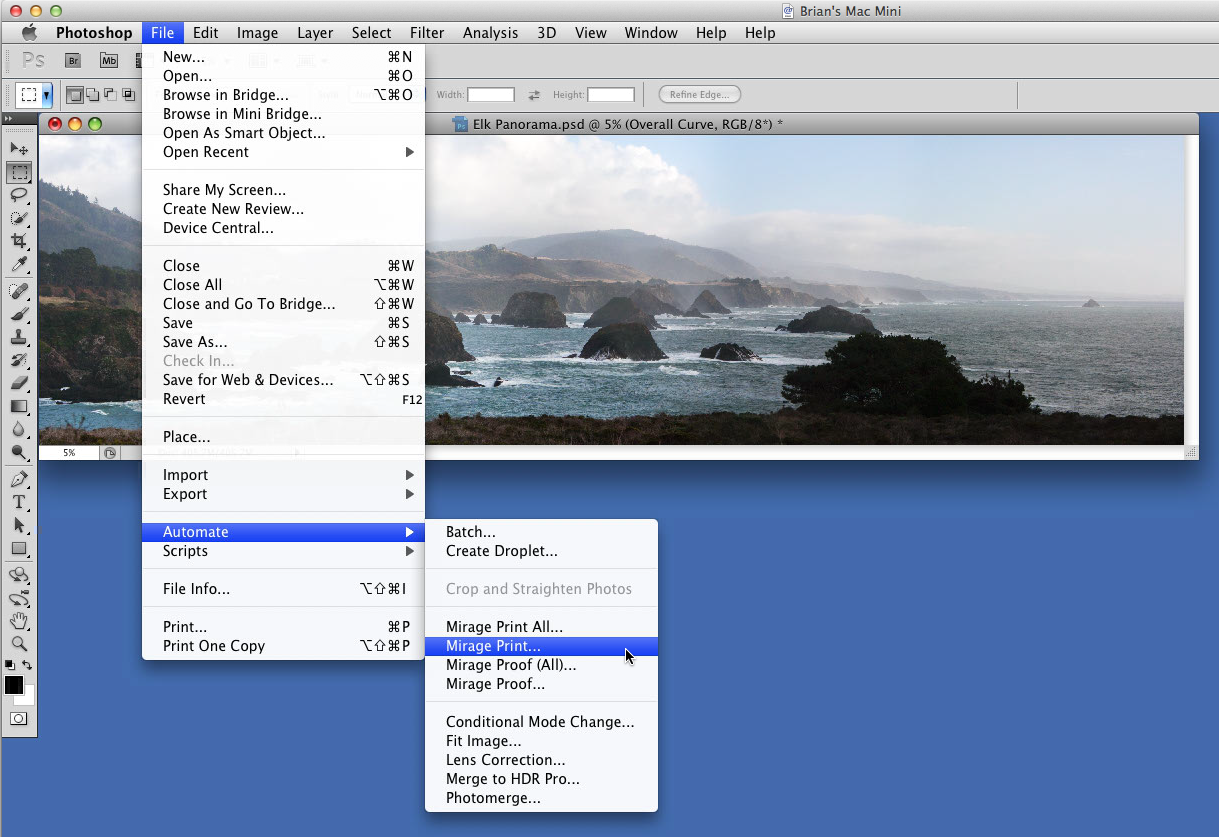 The controls for Mirage software are found under the Automate menu in Photoshop.

Mirage states that their drivers will print any image that you can open in Adobe Photoshop – that means any image up to the 300,000 pixel limit of that program. That’s nearly ten times as long a file as the stock printer drivers and Photoshop will support on their own. That is the feature I need most right now. 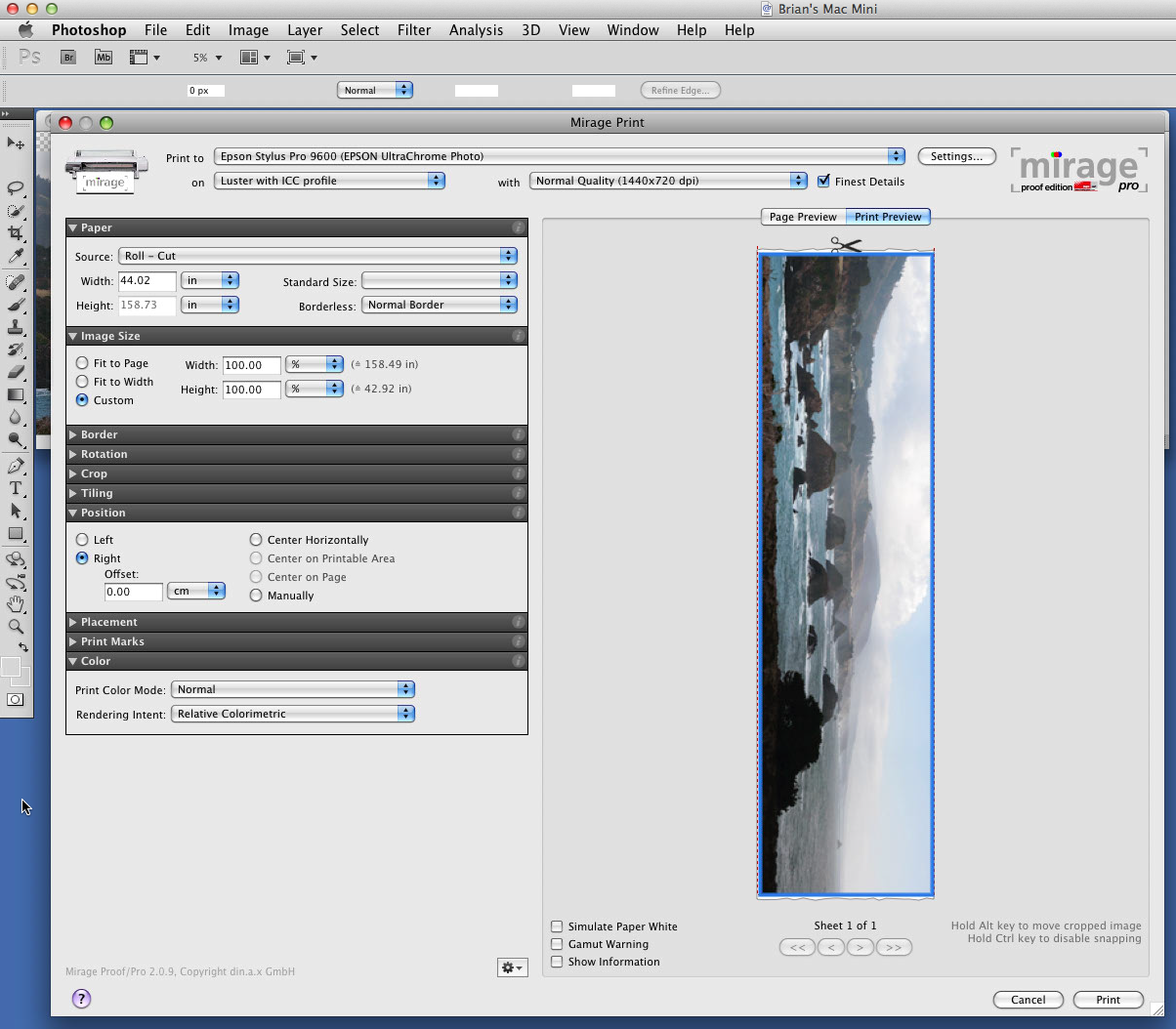 This is the Mirage control palette. On the left are the various sections, each of which open to reveal controls for the details of the setting. On the right is the overview of the image to be printed.

There are several other compelling reasons to get Mirage software. One is that is does image nesting. It has several settings for that nesting including one to make the printing with minimal waste, one to make a grid of columns and rows – which would make cutting images apart easier, and one to optimize for minimal cutting. I regularly print posters for a local bank, making two-up poster sets on the Epson printer. They way I have been running these for years is to gang them together in Photoshop first, adding cutting marks, then printing them. With the nesting features of Mirage, I can just choose two posters, tell Mirage to print them together, and it will do the rest.

And, since Photoshop CS 5, when Adobe stupidly removed the feature that allowed us color experts to print a profiling test chart without any color management applied, the only way to print such a pattern target is to use the Adobe Color Printer Utility application (which was a really stupid answer to their really stupid removal of the feature). With Mirage, there is a simple means to print a target on any Epson printer without any color management applied.

Once the job is started, the Mirage Queue takes over and tells you percentage of completion, and hours and minutes until completion. Printing begins within seconds of start, and spooling continues while the printer begins to image.

The Mirage driver software supports a host of Epson-supplied ICC color profiles, which the software chooses according to the substrate you select. If you want to use your own ICC profiles – and I do – it allows you to create a custom medium, applying your own color profile. Selecting that medium is easy; it shows up in the list of available media when you start the software.

And, Mirage allows the creating of Proofs, which is the function of having the printer simulate a printing press. In Photoshop’s printer pane, this same feature is available, allowing the user to choose the printer’s profile, then to add a simulation profile and rendering intent to make a proof. Mirage software puts this in its own category called Proof, and affords the same controls.

I’m approaching the end of my first day with Mirage software, and so far my productivity is up, up up! I have made two 14-foot panoramic photos so far, and I am printing the third. The software tells me that I have one hour and two minutes left (the Epson drivers that I use tell me nothing for percentage of completion, nor time remaining. Newer drivers from Epson do report percentage of completion.)

Mirage is available for both Mac and Windows operating systems, and it controls nearly every professional Epson ink-jet printer. The latest printers and the very latest operating systems are all supported.

I really like this software, and most importantly, it saves me from some daunting problems in the weeks before my big exhibition.

18 Responses to It must be a Mirage!
My large file printing problems are solved