A new lightbulb produced on a printing press

Bill Ray has been talking about, and demonstrating printed electronics for a long, long time. I am one of the legions of people who have been impressed by his clever, scientific presentations that fall somewhere between circus side show and academic lecture. 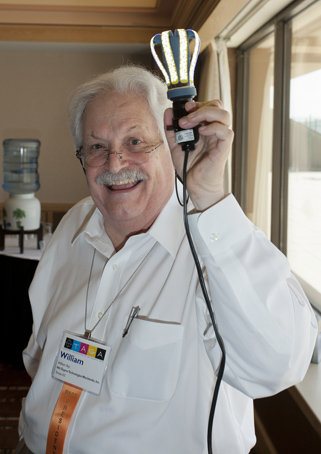 Dr. Bill Ray holds the Impossible Bulb and declares, “This represents 50 million dollars!”
The bulb, which uses inorganic light-emitting diodes distributed along flexible elements in the shape of a conventional incandescent bulb.

Bill is a former TAGA president, a lifelong member of the graphic arts community, and an inventor. For the past 15 years he has been concentrating his efforts on the merger of conventional printing processes and the manufacture of electronic and electrical products.

I have a sheet of TIO (Tin-Indium-Oxide) foil in my office that features a screen-printed image of a Motorola cell phone (which dates the product to before the current line of smart phones). This printing lights-up when I flip a switch on a battery box connected by a flat cable to the TIO foil.

Dr. Ray has made many presentations to students, and he always ends his talks by taking a prototype of some product out of his briefcase, attaching a battery to it, and making people gasp in excitement when that product lights up. 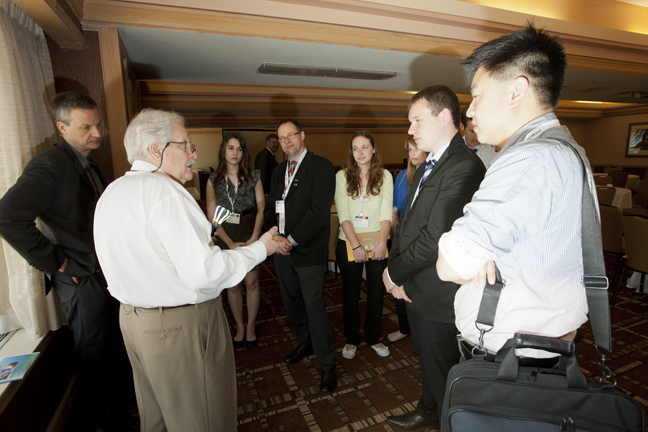 A group of TAGA students listen to Dr. Ray as he explains his new light-emitting device.

And he has promised us for years (decades?) that soon – really soon – he would be able to show us a consumer or industrial product that would commercialize his scientific work combined with his printing experience combined with his novel ideas. 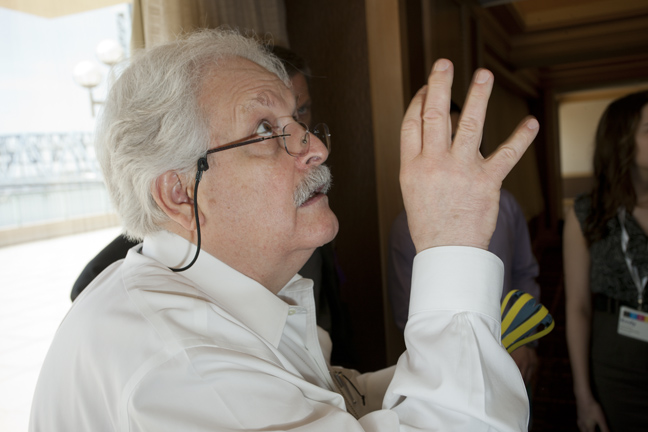 Bill Ray makes a dramatic point in his discussion with TAGA students. He holds in his left hand the Impossible Bulb, powered-off. The yellow strips are screen-printed with thousands of tiny LED elements that emit light when energized.

Called the Impossible Bulb, it is an inorganic LED light bulb that is approximately the size of an incandescent light bulb. The model he showed today emits about the same amount of light as a 20W incandescent lamp while consuming about half that much power.

Bill told us that the Impossible Bulb got its name from a comment made by an engineer in Southern California who boasted that Bill’s idea for the light-emitting device was impossible.

The bulb is not yet on the market, but it has a name, it has a package, and is being tested by national laboratories. Dr. Ray’s company is manufacturing the bulb, and plans to bring it to a retail store near you later this year.

I admit to having been a bit skeptical, though always impressed, by Bill’s many presentations on light-emitting printing and printed products. I was thrilled this morning to see Bill plug his Impossible Bulb into an electrical outlet, and turn it on.

I congratulate him and his company, Nth Degree, for their success in making this new light bulb (that really isn’t a bulb) and bringing it to market. The implications for the printing industry are immense, and the benefit to humanity is tremendous. The bulb has no toxic gases, metals or parts; it consumes very little enrgy, and the color of its light is pleasing to the eye.

I’m excited because this is just the first day of TAGA, and we have already seen this impressive new product.

Brian Lawler is an Emeritus Professor of Graphic Communication at California Polytechnic State University, San Luis Obispo. He writes about graphic arts processes and technologies for various industry publications, and on his blog, The Blognosticator.
View all posts by Brian Lawler →
This entry was posted in New technology, People. Bookmark the permalink.

4 Responses to A new lightbulb produced on a printing press