Drawing on the iPad is a joy with Paper

Blognosticator’s update – January 10, 2014: I have written a recent blog about a new Pencil tool sold by 53 to use with this app. You can read that post here.

I have tried a variety of “natural” drawing apps on my iPad since I bought it about a year ago. Some I like, some I don’t. In the end, I find myself not using any of them. I resort instead to drawing on paper with a felt pen. My favorite sketching medium is a paper napkin with a bamboo-tip felt pen. I scribble, and doodle, and I come up with some nice sketches from which I make my illustrations (later in Adobe Illustrator).

Last week a friend showed me a new app for the iPad called Paper, from a developer named 53. Yep, 53. 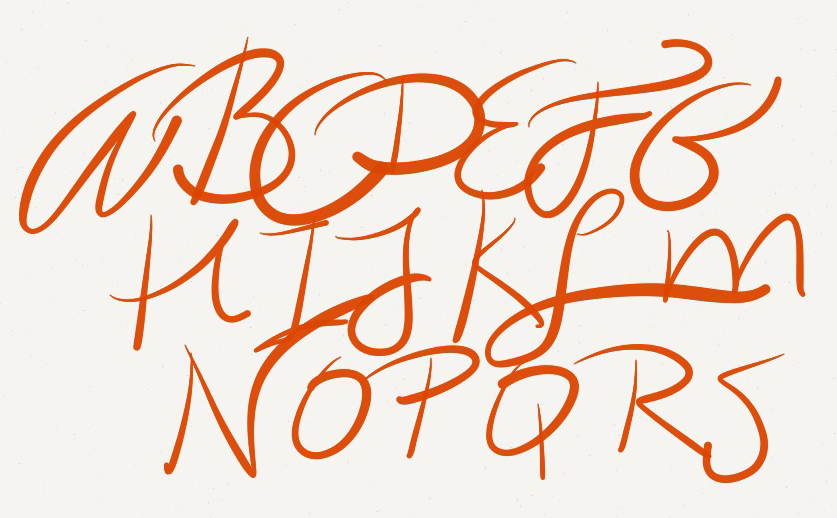 I drew this alphabet with my finger on the iPad, using the Paper app from 53. Look how nicely the app smooths the letters, making them look more “professional” than my finger would normally allow.

This is the first drawing app on the iPad that I have found to be so pleasant that I want to draw with it.

Paper is – basically – free. When you get the free version, you are limited to just one brush, a pen tool that responds to pressure and speed on the screen. It’s the nicest of the five tools available for Paper, and it is enough for many people. But for $8.00 I bought the other four tools – a colored pencil, a felt pen, a sharp pencil, and a Sumi-e brush. 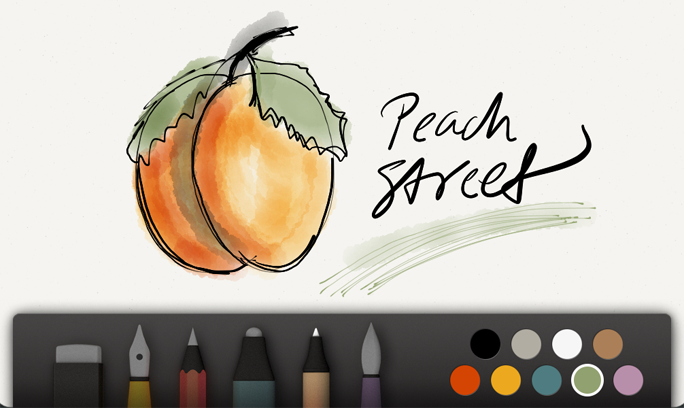 Here is my Peach Street artwork, drawn with my finger, and a Griffin stylus on the iPad using Paper. Notice the six tools along the bottom: eraser, pen, colored pencil, felt pen, sharp pencil and Sumi-e brush. The nine colors in its entire palette are at right. That’s all you get for (only) $8.00.

I am really taken by this app, and what I find most appealing is the feel of the brushes, and the “natural” way the app responds to my gestures. It’s not clunky or rough like other apps. The scripty lettering I do when I brush with my finger on the screen is nicely smoothed by Paper into lovely lines that make me feel like I am an awfully good lettering artist (it improves my scratches immensely).

I have tried sketching, lettering, drawing and “lecture-drawing” which is what I practice when I work on of a chalkboard at the university. I might even try this in front of my students next week, iPad in-hand, connected to the projector cable. That might help me to create some nice hand-out quality illustrations that have more than the transitive value of scribblings on a chalkboard. 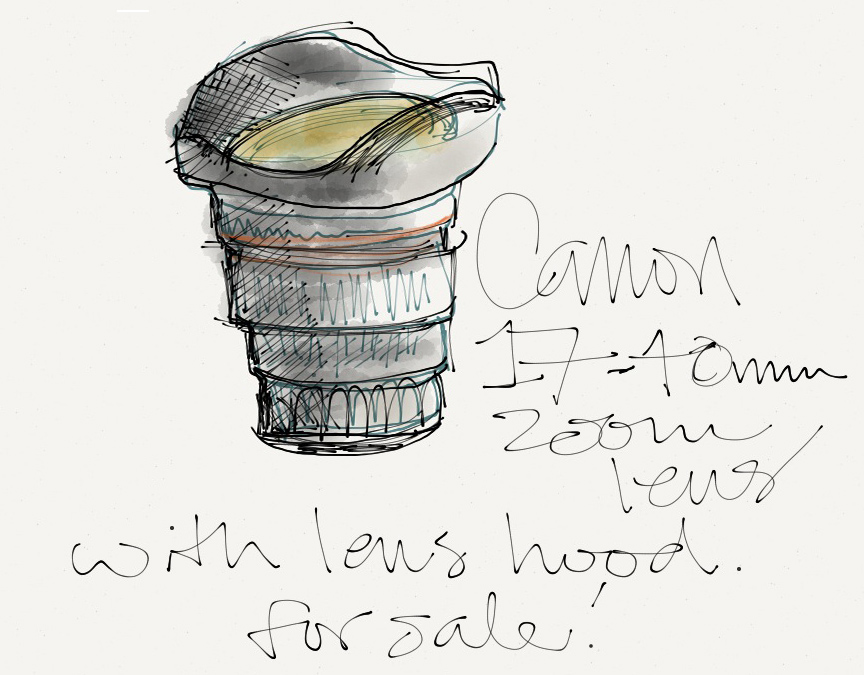 I drew this while watching people bid on my eBay auction this evening. My lens didn’t sell any faster, but it was fun to draw the image using Paper.

The Paper app has a few drawbacks: it has a palette of only nine colors. You can’t get more. It has some sort of “undo” function, but I can’t find it often enough to enjoy it, and there are just the five tools mentioned. You can’t change brush size or intensity; you can’t change much of anything. But, I still like it a lot.

I have been working on an illustration of a peach for my Peach Street weather station “badge” that I might use on my web site. I have been sketching a lens that I have for sale this weekend on eBay. And, I have been doodling with script alphabets. I might take some of these sketches into FontLab and create a new handwriting font – who knows?

I find it interesting that numerous people have complained on the iTunes Music Store that $8.00 is an awful lot to pay for an app. Well, folks, have you priced Adobe Photoshop recently? To quote one of my students who saw Paper, “I spent half that much on a cup of coffee this morning.” 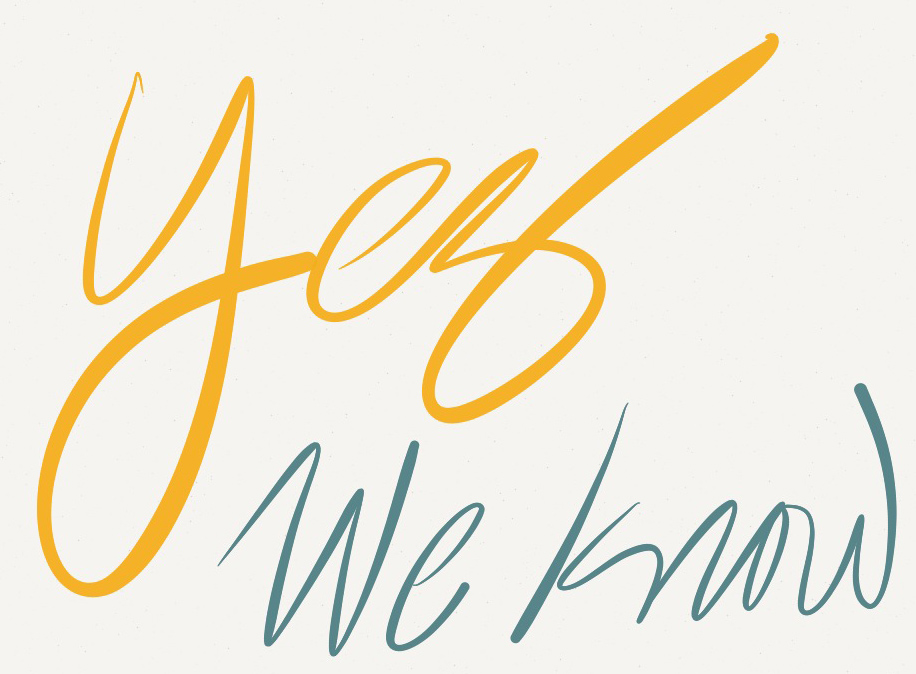 Maybe I can nominate this lettering for one of the coming Presidential campaigns. I am very happy with the quality of the word “Yes.” I could easily use this as a template in Illustrator to create a vector illustration.

Paper lets you build sketchbooks with multiple pages, each of which represents a single horizontal page folded into a book. Once you have drawn something, it allows your images to be passed to the iPad’s Camera Roll, and it allows for your sketches to be sent to various social media sites.

This app is very nice, and I think that anyone who has even rudimentary drawing skills can benefit from its clever tools.

Remember – it costs about twice the price of a cup of coffee at Starbucks, and you can use it over and over again.

Brian Lawler is a Professor of Graphic Communication at California Polytechnic State University, San Luis Obispo. He writes about graphic arts processes and technologies for various industry publications, and on his blog, The Blognosticator.
View all posts by Brian Lawler →
This entry was posted in Art, New technology. Bookmark the permalink.