At a conference in San Antonio, Texas, two weeks ago, the student team from Cal Poly took top honors for their redesign and printing of packaging materials for Cal Poly’s student-made chocolates. 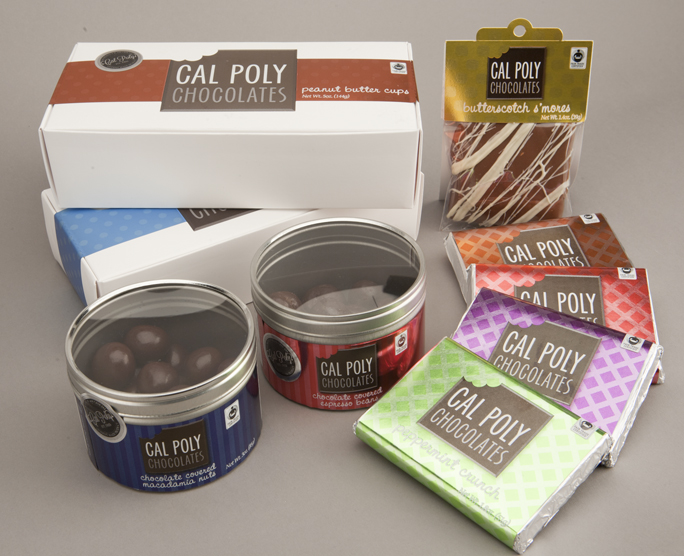 These are the redesigned chocolate products produced by the Cal Poly Phoenix Challenge team. Graphic Communication senior Kaela SooHoo was the designer of these packages. The whole team was involved in the production and printing of these beautiful labels on Cal Poly’s flexographic equipment.

The Phoenix Challenge, operated by the Phoenix Challenge Foundation, is a competition between universities that teach flexographic printing and packaging arts. The Challenge organizers assign a theme annually which defines the scope of the competition. In previous years the challenge has been to make packages for hotel amenities, or a package for a candy product.

This year, the Phoenix organization gave a more generic challenge: to produce packaging and labels for no more than four items that might be sold in a student store. This gave the Cal Poly Phoenix team an idea. Cal Poly is the only university in the nation that has a chocolates course, where students learn how to make production quantities of fine chocolates for sale on campus.

Kaela SooHoo, a Cal Poly Graphic Communication senior, accepted the task of redesign, and then the team devised a plan to produce a variety of containers and labels for the (very tasty) campus-made chocolates.

In the process, the student team made polyethylene packages, a tin of chocolates, a wrapper for a box of chocolates, and a hanger-tag package. The students did all of the production on the university’s Mark Andy eight-unit flexo press. Prepress and plate-making was done of a new line of products recently donated by EskoArtwork, including the new Spark imager, which has the ability to make flexographic plates with images so fine that microprinting is possible.

This photo, taken from the press roll of Cal Poly security stickers, shows the design of the aluminized material.

On each of the boxed chocolate packages is a printed “security seal” which includes microprinting, the smallest lettering ever attempted at Cal Poly on a flexo product. Printed on an aluminum pressure-sensitive material, the label states that the chocolates were made by students at Cal Poly. What isn’t obvious is that the guilloche pattern around the outside of the circle is microprinting. The words Cal Poly make-up the “lines” in the microprint in a size too small to see without a magnifier.

At much greater magnification one can see that the security pattern in the guilloche border of the stickers is actually lettering! Printed in a size measured in single microns, the lettering disappears into a pattern at any normal reading distance.

At the competition, the Phoenix Challenge team impressed the judges with their work, not only for the effort to design and print, but by the fact that they had chosen four real products that are actively sold in Cal Poly’s student stores. The products are for sale now, replacing a years-old design that featured an aerial photo of the campus.

Malcolm Keif, the faculty advisor to the Phoenix Challenge team, returned from the conference with a huge smile on his face, and not a single chocolate left in his briefcase. He explained that the team was inundated with requests for samples – and the sample were quickly consumed. 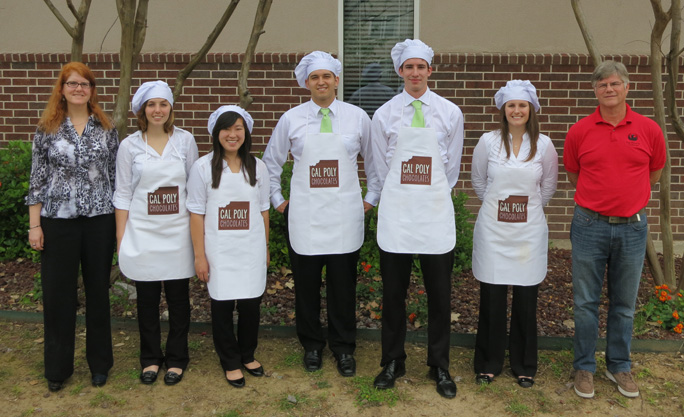 Congratulations to these dedicated students, and to their advisors!

Brian Lawler is an Emeritus Professor of Graphic Communication at California Polytechnic State University, San Luis Obispo and currently Guest Professor at Hochschule München. He writes about graphic arts processes and technologies for various industry publications, and on his blog, The Blognosticator.
View all posts by Brian Lawler →
This entry was posted in Education, New technology, People. Bookmark the permalink.