We showed the film: Linotype: The Movie last week at Cal Poly. The movie was great! We had about 100 people in attendance, including John Werner, who was once the director of typography for the New York Times. He made some interesting comments after the showing and told us a few tales about his time at the Times.

The film was being presented as part of International Printing Week at Cal Poly, a celebration of our industry and its many practitioners. The screening took place at 1:20 p.m. in the Spanos Theatre on the Cal Poly campus (a parking permit is required). Immediately before the screening was a lecture by the State Printer of California, Jerry Hill.

Printing Week is so important to our department that we cancel all classes and the students attend lectures by industry experts who talk about everything under the sun related to the graphic arts.

The film was made by Douglas Wilson of Springfield, Missouri. It is comprised of interviews with Linotype operators, mechanics, historians, collectors and others.

I had spent one morning the previous week moving Linotype machines in the Shakespeare Press Museum at Cal Poly. We were bringing in a “new” Linotype Model 31 (built in 1931), and moving an old Linotype from 1905 out. It will move to another museum. We just don’t have space for two of these machines. We also moved a Linograph machine out. The Linograph was a knock-off of the Linotype machine that was made in the early part of the 20th century. 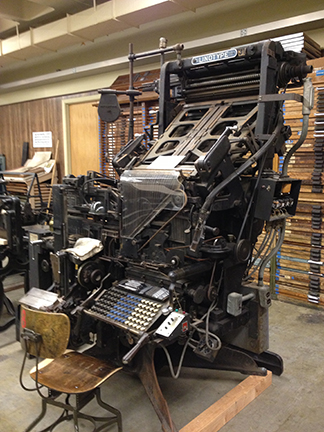 The “new” Linotype Model 31 at Cal Poly. This machine will work soon, and it features a Star Quadder, a device that was added after manufacture to push the matrices left, right or center during typecasting. Even the operator’s chair is authentic; this is the chair that was used by Linotype operators all over the world.

The “new” machine we installed has the advantage of being a working Linotype machine. It can be powered up to make type, and its magazines are full of matrices. I plan to rewire the machine in the coming weeks and prepare it for a new and useful life casting type again.