Bavaria has castles! I have photos.

In my home county in California we have a famous castle, one built by newspaper magnate William Randolph Hearst in the early 20th century. Called Hearst Castle, it is a tourist mecca, visited annually by several million people. The castle is an eclectic collection of arts and an architectural masterpiece designed by Julia Morgan, Hearst’s favorite architect. We San Luis Obispans are justifiably proud of the castle, which is a State Park owned by the people of California.

My wife and I have spent the last five months living in Munich, Germany. We have marveled in the excitement of seeing water fall from the sky (they call it “rain”), and we have enjoyed beautiful green fields, verdant forests, some very cold weather and even snow! We have none of these things where we live. By the end of March our county has turned to “California gold” which is the happy term for the dry grass that we have after our very short rainy season. That dry grass often becomes the tinder for wild fires that often ravage our state. There are over 100 wild fires currently burning in California. None in Bavaria. 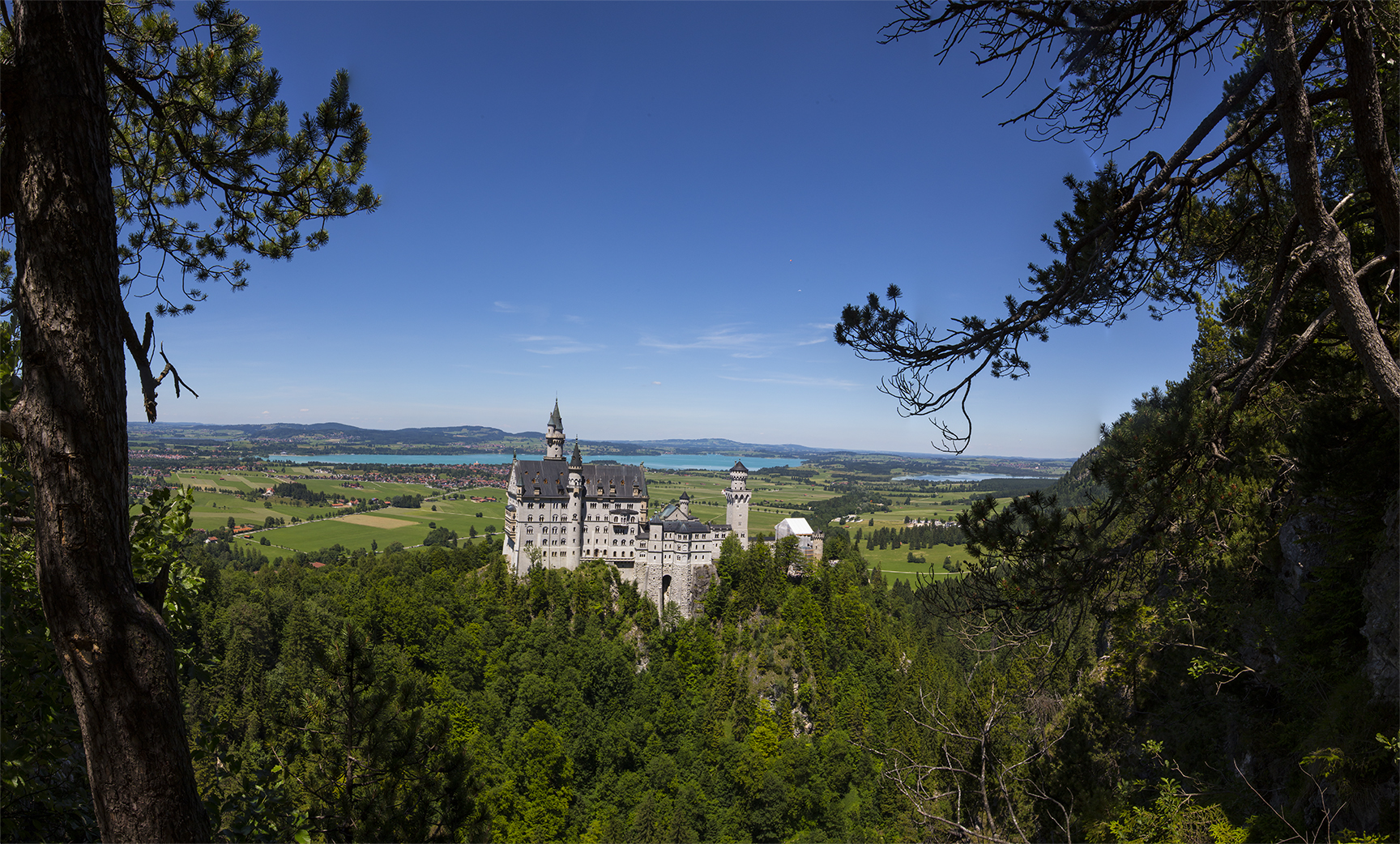 This is the famous Bavarian castle Neuschwanstein in the mountains south of Munich, Germany. It was built in the 19th century by King Ludwig II, but never finished. It is run by the government of Bavaria and is open for public tours.

And, where we have one castle, Bavaria has too many to count.

(Crazy) King Ludwig II built three of his own, and had planned to build another two, but he ran out of money and died young so never finished. His dad had another three; there are others scattered around Bavaria. The largesse of Ludwig’s castles is impressive.

While staying in Munich we visited Schloss Nymphenburg, Herrenchiemsee and the Residenz in downtown Munich. We also traveled to the Schongau castle and Neuschwanstein castle, which is the one credited with inspiring Walt Disney to build his Cinderella castle at Disneyland.

I had set a goal of making a GigaPan photo of the Neuschwanstein Castle, and I carried my camera and tripod with the GigaPan head to the castle – twice – to get the photo. On my first visit we ran out of time and had to leave before I had a chance to make an image of the castle. I did make a GigaPan of the valley below the castle and the distant towns of Schwangau and Füssen. On the second adventure I planned enough time to hike up to the castle and then on to the Marienbrücke, a pedestrian bridge in the canyon above the castle, to take a GigaPan from there.

This is Schloss Nymphenburg located on the west edge of the city of Munich. It is home to spectacular gardens and palatial rooms.

When you are on the Marienbrücke you are there with at least 100 of your closest friends. Everyone is jostling for a position to take photos of the castle, and it’s a human traffic jam. I estimate that there were 150 people on the bridge while I was making my images.

I set up my tripod in a position where I could make a lovely photo of the castle. I put two of the legs against the cables at the edge of the bridge. Then i put the third leg out into traffic, adjusted the view and began my photography. But the constant movement of people on the bridge was causing the boards under my tripod feet to bend. The camera was moving significantly between frames. After about 50 exposures I canceled the session and moved the tripod about six feet to the right, with the third leg resting on a steel beam supporting the boards. It was more stable, and free of the bouncing effect.

…and this castle is located on Herreninsel, an island on the Chiemsee, a lake in southern Bavaria. The castle is an exact replica of Versailles (but slightly larger). It was built, but never finished, by King Ludwig II who spent only ten days in the castle in his lifetime.

Then I started over. I used my Canon 100-400 mm zoom set to 300 mm, and I focused carefully on the castle. After adjusting the exposure to provide a fast shutter speed (to prevent blur from movement), I was shooting at 1/160 sec. at f20. The combination would provide excellent depth-of-field and would resist movement. The GigaPan device asks for the upper-left and lower-right, and then it calculates the angle of your lens, and then the number of photos it needs to take to capture the entire scene. In this case it calculated 350 frames. I started it running and then stood with my legs on both sides of the extended tripod leg. I also held the tripod firmly with one hand for the entire time (about 20 minutes) so that it wouldn’t move in the event someone kicked one of the legs. I was pretending to be an immovable obstacle so that no one disturbed my effort. It worked. 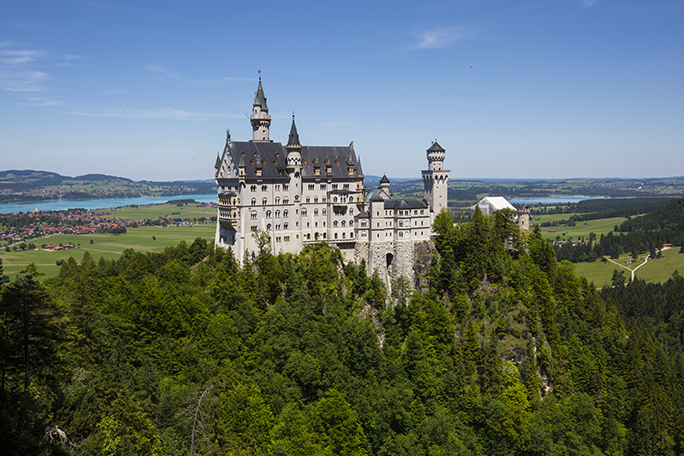 This image of Neuschwanstein is from my GigaPan image. To see the full-resolution image, click here. There you can zoom to see tremendous detail in the image.

After taking the complete set of photos, I crossed the bridge and hiked further up the ridge along a trail that overlooks the castle. The view from there may be a bit better, but I was satisfied with what I had done on the bridge, so I passed on the opportunity to make another 30-minute GigaPan. I took a few six-frame panoramic images and hiked back down.

Back in my apartment I processed the images. I shoot everything in Camera Raw, and I import as a matter of obsolescence-prevention to Adobe DNG files. GigaPan will work with JPEG and TIFF. This requires that I convert to TIFF because I would never convert to JPEG this early in the process – it’s too harmful to images. To convert I use the Image Processor in Adobe Photoshop and I end up with a folder of TIFFs ready for the GigaPan Stitch software to put the images together.

For this image, that took only an hour or so on my MacBook Air. I did some retouching (not much was needed) and I enhanced the image with a Vibrance adjustment layer. The final image, after a little cropping, measures about 10 GB. Its resolution is 102,096 x 37,852 pixels. At 300 ppi (graphic arts quality) it would reproduce up to 340 inches x 126 inches or 28 feet wide and over 10 feet tall.

The photo is very pretty, and I am glad I made it. I would like to return again in different weather to capture the castle in a variety of lighting conditions and with more beautiful Bavarian clouds, which are very common. But I am returning to the U.S.A. soon and that photo will have to wait for another trip to Germany – something I hope to do as soon as I can.