This is part four of my series on panoramic photography and cameras.

In the first episode I wrote about rotating panoramic cameras that used rolls of film. As the camera turns, the film rolls past a vertical slit aperture in the back of the camera. The speed of the film must be synchronized with the speed of the camera (the focal length of the lens and distance-to-subject are also factors). In the second blog I wrote about photo-finish cameras that record strip images of things that move in front of the camera. In my third blog on the topic I wrote about roll-out photography, where you use a photo-finish camera to take a strip image of an object turning in front of it.

In this thrilling episode we will discover how digital panoramic cameras work. 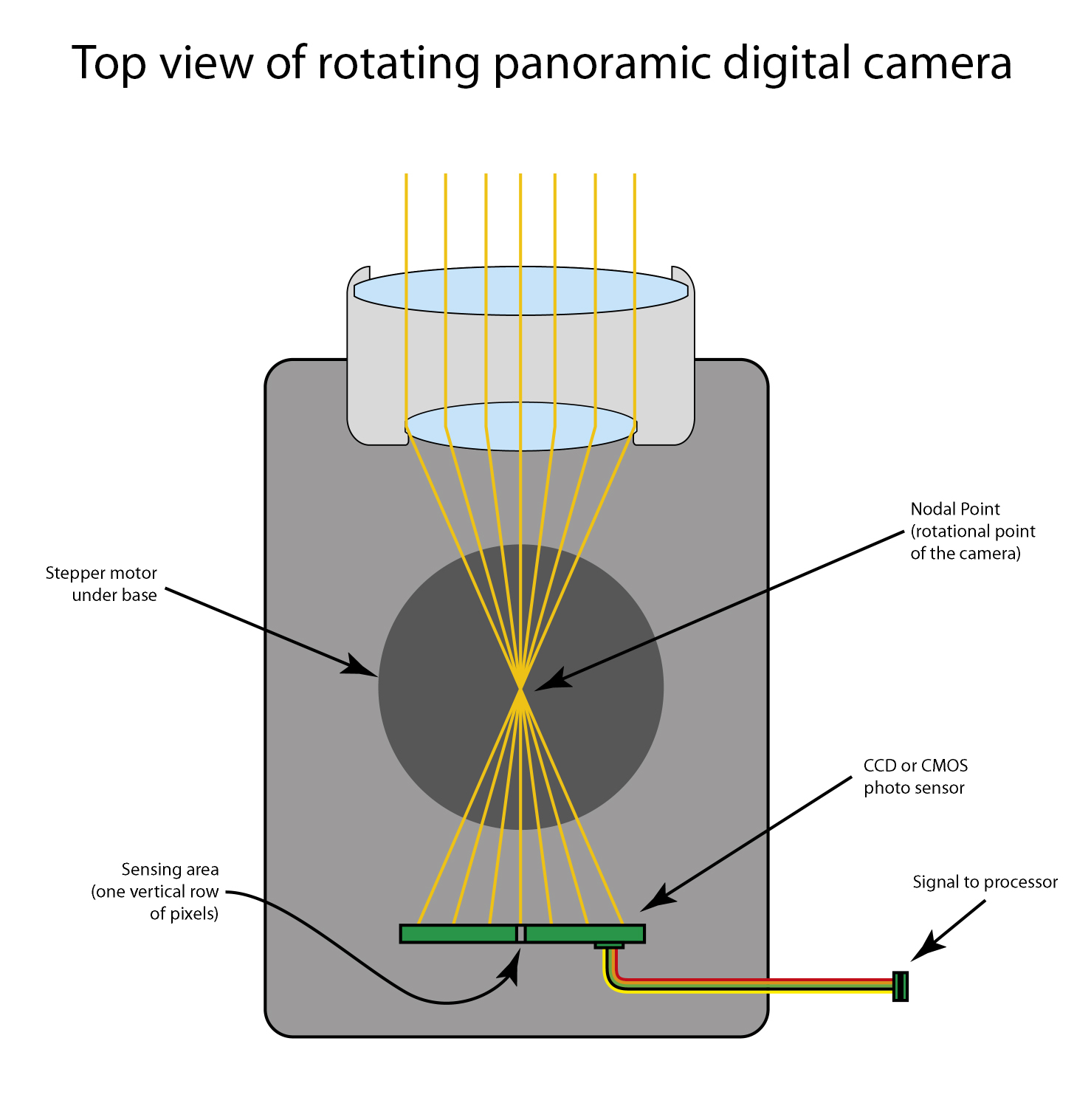 This is what a digital panoramic camera looks like. The camera might be a specialized digital device or a common mobile phone. The sensor would need to be a trilinear array (three rows of pixels – one each for red, green and blue) and there would have to be some phase-correction software to put the three colors into correct register as the camera captures the image.

Where do I buy one of these rotating digital panoramic cameras? The best place to get one is in your pocket – your mobile phone is capable of making very nice panoramic photos, and those are good examples of this kind of photography. To get a professional version of this type of camera, you will need to spend thousands of Euros to buy a Roundshot D3 from Seitz of Switzerland.

Unfortunately, the handy mobile phone is not capable of making a 360-degree panoramic, but instead it forces you to stop at about 240 degrees. This is explained by the fact that you are holding your mobile phone out in front of your body as you pan a scene. The parallax error of this distance (from the true point of rotation – your feet – to the camera’s film plane) is too great for software to correct; it’s impossible. As a result, our mobile phone panoramic photos are always partial panoramic images – sweeps if you will – that make up a significant part of a scene.

But, what if I could rotate my mobile phone on its optical axis?
The panoramic software included with our phones will not allow this to make a 360-degree photo under any circumstances, but the resulting images will be slightly better than those we take with our arms extended out from our body.

But – here is an opportunity. What if we take the mobile phone, which has already proved itself to be a reasonable photo-finish camera, and put that camera-and-software on a rotating base? Aha! Now we have a low-end rotating digital panoramic camera. With this combination we can make true panoramic photos that are 360 degrees – or more! In fact with this combination of devices you can just keep going, making multiple panoramic images in a continuous image (to the extent that the software will allow you to record). 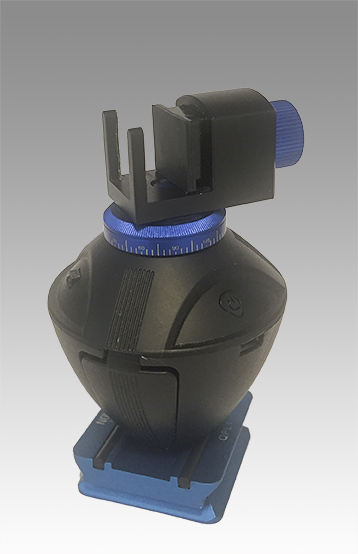 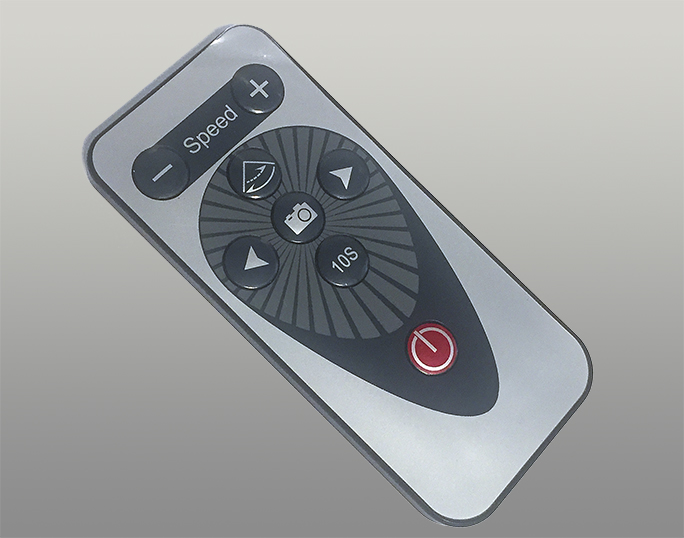 This is the motorized base and its wireless infrared controller. I mounted the €20 rotator to a €30 aluminum tripod plate! The clamp will hold a mobile phone. It also comes with a GoPro base and thumbscrew.

I have such a device. I bought it from an online store, and it shipped from Hong Kong to Germany in about a week’s time. It’s a simple, but slightly flawed, rotational base that will hold and turn a GoPro or a mobile phone to get delightful panoramic images.

This is a true panoramic image taken with my iPhone 6s and the rotating base. I allowed it to go all the way around three times, making a continuous 1080° image. It is slightly distorted, a result of the camera turning a bit slow relative to the speed of the slit-scan software. I can distort this in Photoshop to repair that, or I can take the photo again with the rotating base turning faster.

When I say “slightly flawed” I mean it has some quirks. One is that it uses a separate hand-held IR transmitter to trigger its functions. This does not work effectively in bright sunlight, which is a big problem. While standing on the Marienbrücke above the Neuschwanstein castle last week I was unable to trigger it in sunlight, so I had to put it into shade to get it started, then move it back into the sunlight. To stop it, I did the opposite. That’s inconvenient.

Second, its left and right buttons are reversed (left goes right), and third, it has a weird button that causes it to take stammering panoramic images – it turns, then stops, then turns, then stops, etc. I have absolutely no idea why, so I ignore this button. There is also a button with the image of a camera that does nothing.

The little motor device is otherwise pretty nice. It’s well-made and its motor is smooth so I don’t get vibrations in my rotational panoramic photos. I put it on a plate that is compatible with my Really Right Stuff tripod, and I have made a number of nice panos with it this way. The motor has five speeds (there is no way to know which is currently selected): 360-degree rotations take: 28.6, 23.5, 20.5, 18.5 or 15 seconds. I find that the slowest of them works best with my software. The best thing is that the base does not stop at one rotation; it will continue until stopped.

The software I use (Poloska) does not capture the full vertical resolution of my iPhone (3264 pixels on the iPhone 6s). The resulting panoramas that I get with my camera and motorized base are only 1280 pixels on the vertical, which is about one-third of the potential. I don’t know why the software doesn’t capture the entire vertical; I wish it did. Perhaps the author of Poloska – Nikita Shanin – will read this blog and update the software (please!).

I have experimented with the rotating base to determine that when paired with Apple’s photo app taking a panoramic image, it allows me to make a complete sweep in about three seconds – much faster than the time it takes me to do this with my hands, and much more smoothly. The counter-vibration component of Apple’s photo app loses no pixels and the results are slightly better than those I take by hand.

Meanwhile, I have been making panoramic photos with this combination of tools, and the results are impressive, but low in resolution.