Part 3 in a series on panoramic and slit-scan photography

In my recent blogs I have discussed how a mechanical panoramic camera works, and how a photo-finish camera works.

Today I would like to turn the tables, so to speak, on the photo-finish camera. I will begin by asking what happens when you are using a slit-scan (photo finish) camera, and the camera is solidly mounted on a tripod, but the subject turns…?

I was recently touring the Deutsches Museum with my lifelong friend Gary Stine. We came upon a display at the museum which features a turntable on which a person can turn. Included in the display were some barbells that one can hold while spinning around on the turntable to change the center-of-gravity inward or outward, thus changing the speed of rotation. 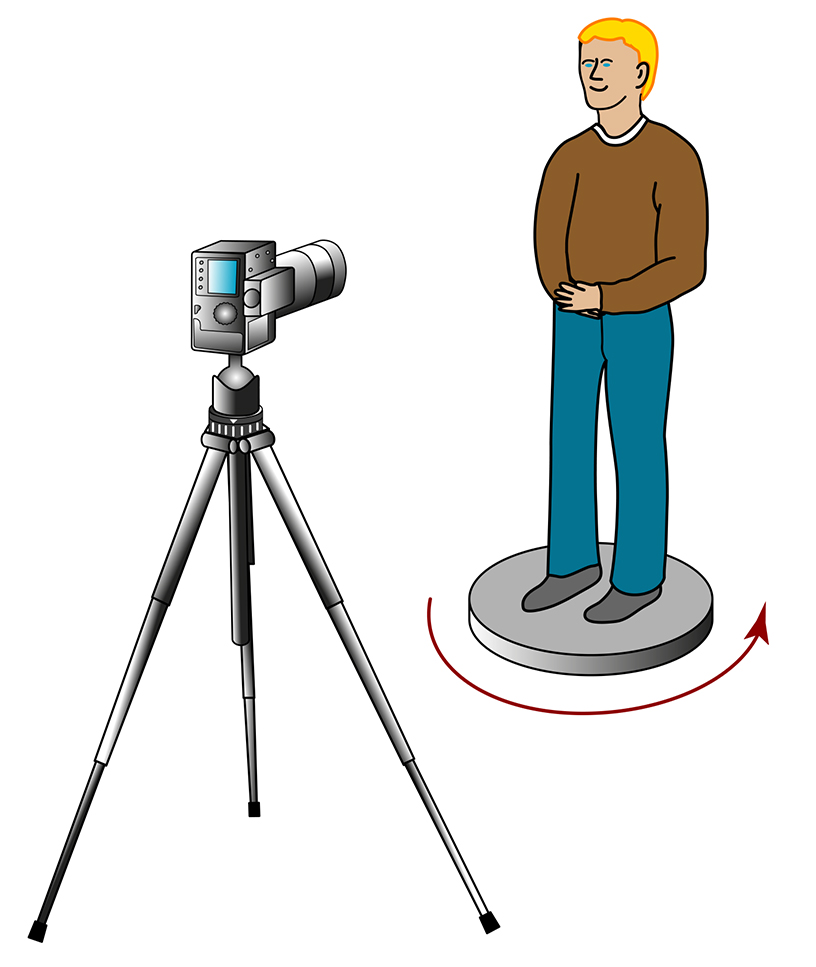 I seized the moment (carpe camera!) and made a roll-out photo of Gray on the turntable.

Roll-out photography is the inverse of photo-finish photography. The camera stands still, and instead of objects moving laterally in front of the camera, they rotate. Significant exploration of this type of photography has been done over the last century, first with film cameras and more recently with digital cameras. It has little purpose, except for scientific studies of cylindrical objects (mostly vases) where the artwork on a cylinder (or something similar) is “unwrapped” to make a two-dimensional image for the study of the surface of the object.

This is my roll-out of my friend Gary Stine. He was standing on, and turning on a turntable at the Deutsches Museum in Munich. We had no way of coordinating the rotational speed of the turntable with the camera, and I did not have a tripod, so this is a bit wobbly.

The method for doing this in a scientific environment is to synchronize the rotation of the object with the camera’s capture. This can be done with a gear belt, a chain and sprockets, or a digital encoder that sends a signal to a digital camera, controlling its speed of sensing.

As with photo-finish photography, the rate of data collection is constant. If the rotation of the object is similarly constant, then the roll-out will be accurate and proportional to the original. Speed differences between the two will result in distortion (which can usually be fixed in Adobe Photoshop).

My roll-out of my friend Gary is interesting, though not at all flattering. But scientists will be examining it for years I am sure.