Photographing the elusive cellist…
and being quiet about it!

I’m the staff photographer for the Festival Mozaic, San Luis Obispo’s wonderful summer music festival. I’ve been doing this for a number of years, and I have learned a lot about photographing musicians who often play notes much softer than the sound of the shutter of a Canon 5D Mark III (even in its “quiet” mode).

I shoot in a number of locations and under a variety of lighting circumstances from oddly misdirected overhead lights to full theatrical lighting on professional stages. It is fun and often challenging.

The most difficult of my shooting circumstances is where I am in the same room as the performers, as is often the case when I am shooting in a church or synagogue. I slip quietly back and forth at the back of the room, carrying my tripod and camera, and doing my best not to be noticed. I choose cameras that are quiet when I need them (though they are harder to use than my normal cameras) and I wait until the forte parts to snap a few photos – even with the quieter cameras. 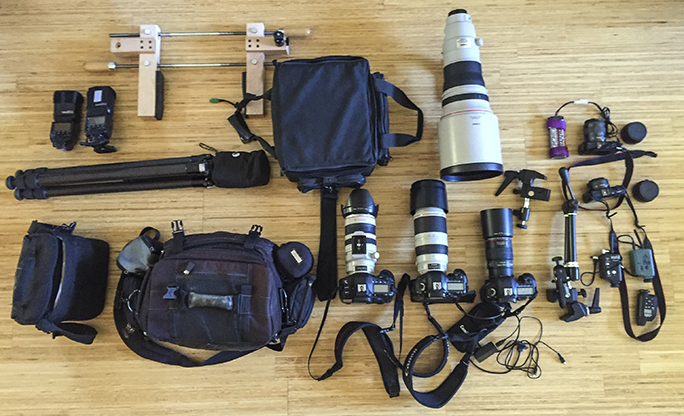 This is most of my camera gear for Festival Mozaic. I carry this stuff to each location where I am shooting photos of musicians.

My gear includes two Canon 5D Mark III bodies, one Canon 1dx Mark III, two Canon EOS M cameras, and one Canon T2i. Lenses range from my 8mm Canon to a rented 400mm f2.8, the Stradivarius of telephoto lenses. I use Super Clamps, Pocket Wizard triggers and some ingenuity to position cameras in remote locations. I place these before each concert in places where I might get a good angle or where I cannot stand during a performance.

On Saturday evening I used a Camranger for the first time. It was plugged into the 1dx. I set it up to be controlled by my iPhone, and I set it to record 4K video. I chose video so that the camera would not make any noise that would bother the players or the audience. The iPhone controller on the 1dx was spectacular. I could see the camera image, and I could set focus and exposure from the comfort of my seat just outside the chapel where the performance was being held. 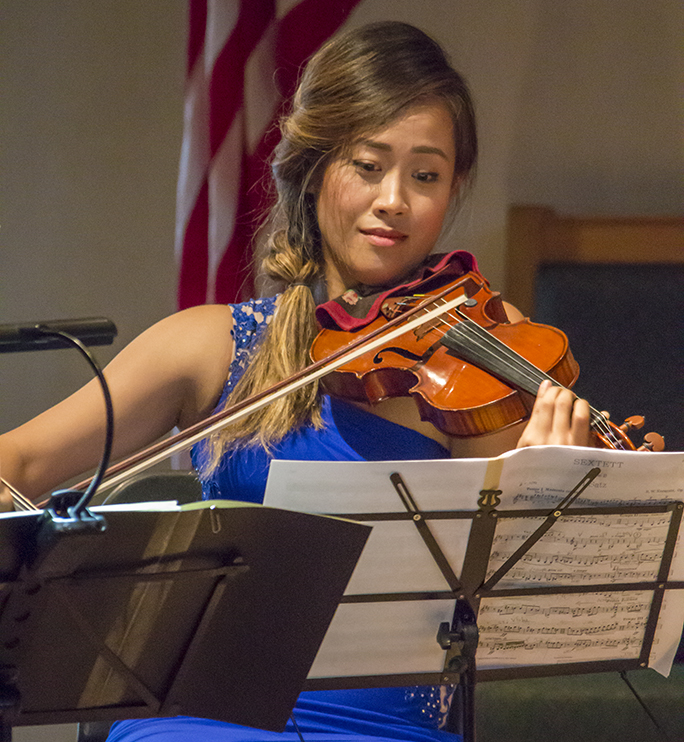 Here, violinist Melody Chang performs Korngold’s Sextet, opus 10, at Temple Beth David in San Luis Obispo. The lighting is not very flattering (direct overhead track lights), but the photo is sharp and it is a delightful image, usable in a future program or on the organization’s web site. This image was made with the Canon EOS M mirrorless camera and my 28-300 Canon zoom lens.

Yesterday I shot with the EOS M camera, also using its video function. While not 4K, the video is surprisingly good from this camera (as long as you use manual focus!). After the concert I selected individual frames from numerous video takes, and exported those as still photos. At about 5 MB each, the stills will work for social media with a little retouching and adjustment. I use the Camera Raw filter to make these changes. 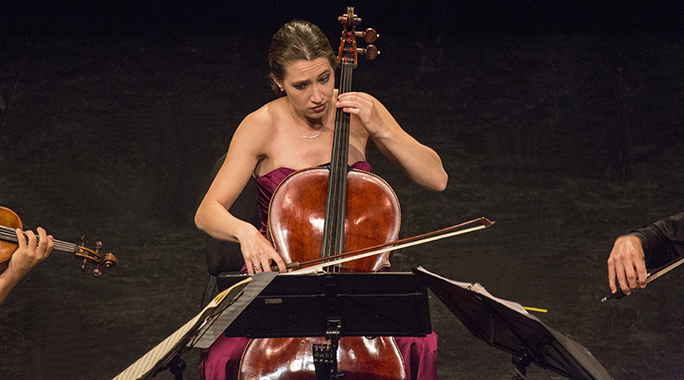 Cellist Madeleine Kabat plays cello in Mozart’s Viola Quintet, K 614. This was photographed with the Canon 400mm f2.8 lens at Cuesta College’s Performing Arts Center. I’m amused by this composition since it lets you know that there were at least two other performers on stage.

My favorite location is the Performing Arts Center at Cuesta College, the local community college. Here I can shoot, and make a little more noise than usual without bothering anyone. I am separated from the audience and the performers by a large glass wall in the lighting booth. From that vantage point I can use the big 400mm lens and make intimate portraits of the performers. The lighting is usually fantastic – sometimes too much. But with all that light, I can often shoot with faster shutter speeds to avoid the blur of hands moving bows across the strings. Sharpness is reasonably easy to capture in these circumstances. 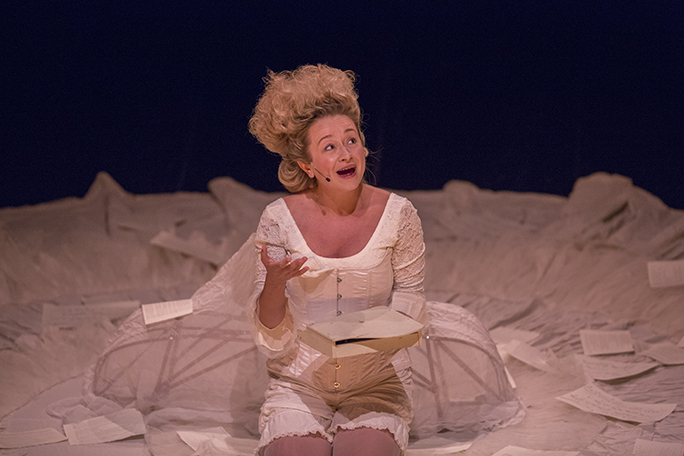 Here, Sylvia Milo performs her one-woman show The Other Mozart (about Wolfgang’s sister Maria Anna Mozart). This image was made with the 400mm Canon lens from over 50 feet in the lighting booth. It is so sharp I can count her eyelash hairs in the photo.

Sometimes I put a 2X teleconverter on that big lens, allowing me to pick a head-and-shoulders image of one of the performers. It allows me to capture exquisite detail in faces, sharp strings, and overall good images. My two 5D camera bodies allow me to shoot with relatively high ISO settings. The problems of image noise that were once a curse to my concert photography are now gone. I routinely shoot at ISO 6,400, sometimes even 10,000. The resulting photos are perfectly acceptable and they can easily be used for print with no apologies. 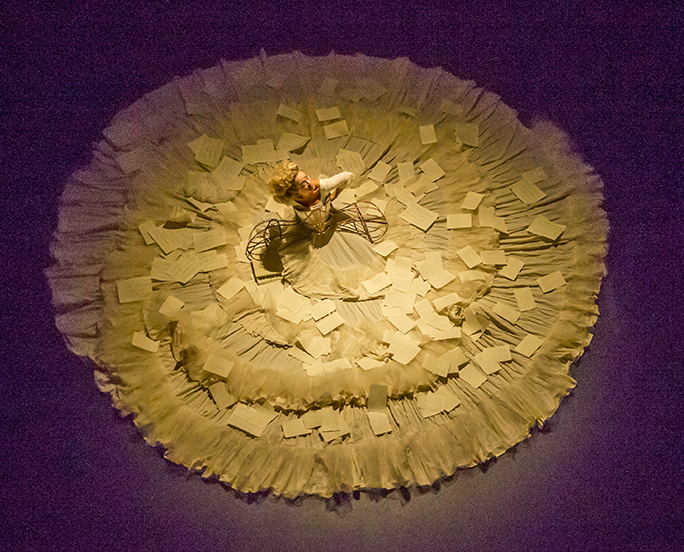 Another image of Ms. Milo in her The Other Mozart performance. This was taken with a Canon T2i camera mounted in the catwalk above the stage. Since the T2i is an older camera with an earlier Digic chip (Canon’s proprietary digital-to-analog converter), it suffers from considerable image noise. I was shooting at ISO 6400, and Adobe Camera Raw saved the image with its digital noise reduction control. The camera was triggered by a Pocket Wizard radio trigger.

Sometimes a clever lighting designer will throw red light on the stage, which throws my cameras into a tizzy. Autofocus doesn’t work very well (or at all), and skin tones are very hard to manage in post-processing. All I can do in these circumstances is hope that the lights move back to normal soon – they usually do.

The auto-focus of the 400mm lens is so stunningly fast, and so good at acquiring the subject, that I use auto focus on every photo, with tiny adjustments of focus by hand when needed. 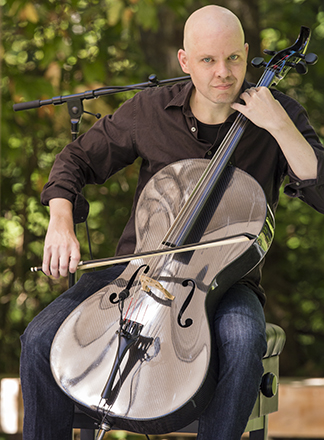 Cellist Eric Stephenson of the PROJECT trio, performs on his carbon-fiber cello in an outdoor setting in See Canyon, near Avila Beach. The lighting was diffused by an overhead umbrella (thank goodness!). Another portrait made possible by the extraordinary Canon 400mm f2.8 lens, it is razor-sharp and can easily be used in print or electronic media.

The other lens that is invaluable is the 100-400 Canon telephoto. Though not as fast at the 400, it’s a pleasantly sharp lens with good auto-focus. The zoom on that lens allows me to pick up pairs of players, or even an entire quartet without difficulty.

I use the wide zoom (16-35mm) for ambience and people photos in the lobby before the concert and during intermission. These provide good material for the organization to use on their web site and social media. 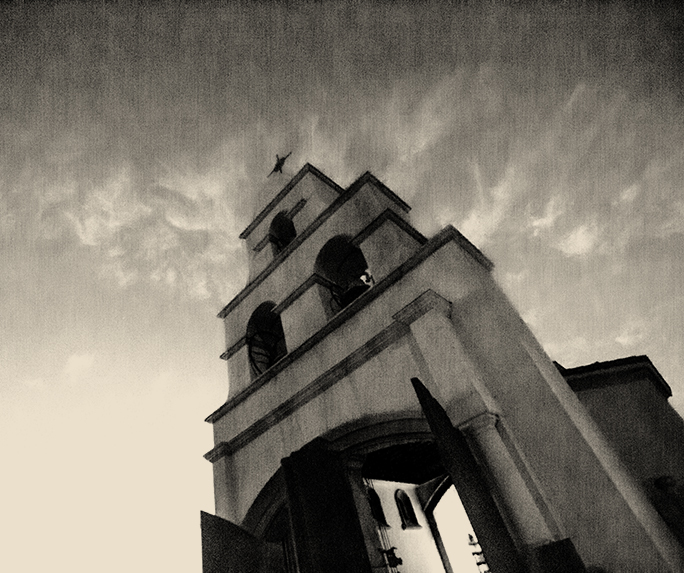 This photo was taken at Serra Chapel in Shandon, near Paso Robles. It is essentially a map of the digital noise in an image from my Canon 5D Mark III with my 16-35mm wide zoom lens. The photo was taken well after sunset, and enhanced extensively in Adobe Photoshop. Ultimately I decided that I like the noise in the photo, so I enhanced it into its own image.

A fellow approached me in the lobby a couple of nights back. He said something like, “I can see how you get those great images! With a camera like that it must be easy.” Sure, it’s easier than it used to be, but there is still considerable skill involved. I have to plan and set-up, and most importantly – be there, in the right spots at the right moments, to take good photos of these performers.

Though I have discussed the cameras and lenses here, the most important part of this work for me is that I love the music! For me it is the ability to hear this great music, to get to know the composers better, and to get to know the performers. I feel like I’m a part of an important event by recording images of these talented people delivering wonderful music to an appreciative audience. And if they hear the occasional click of a shutter they are usually too polite to let me know.

All images copyright 2016 Brian P. Lawler. Thank you to Festival Mozaic for access to the performances and performers.

2 Responses to Photographing the elusive cellist…
and being quiet about it!