Some are really dirty. And, for those I am implementing Digital ICE, the technology that was developed in Austin, Texas at a company called Applied Science Fiction, a scientific think-tank of photographers and inventors. Eventually the company was bought by Eastman Kodak, and the technology was licensed by a number of scanner manufacturers.

First to adopt Digital ICE (ICE stands for Image Correction and Enhancement) was Nikon, whose CoolScan series had the technology for about a year before anyone else entered the fray. 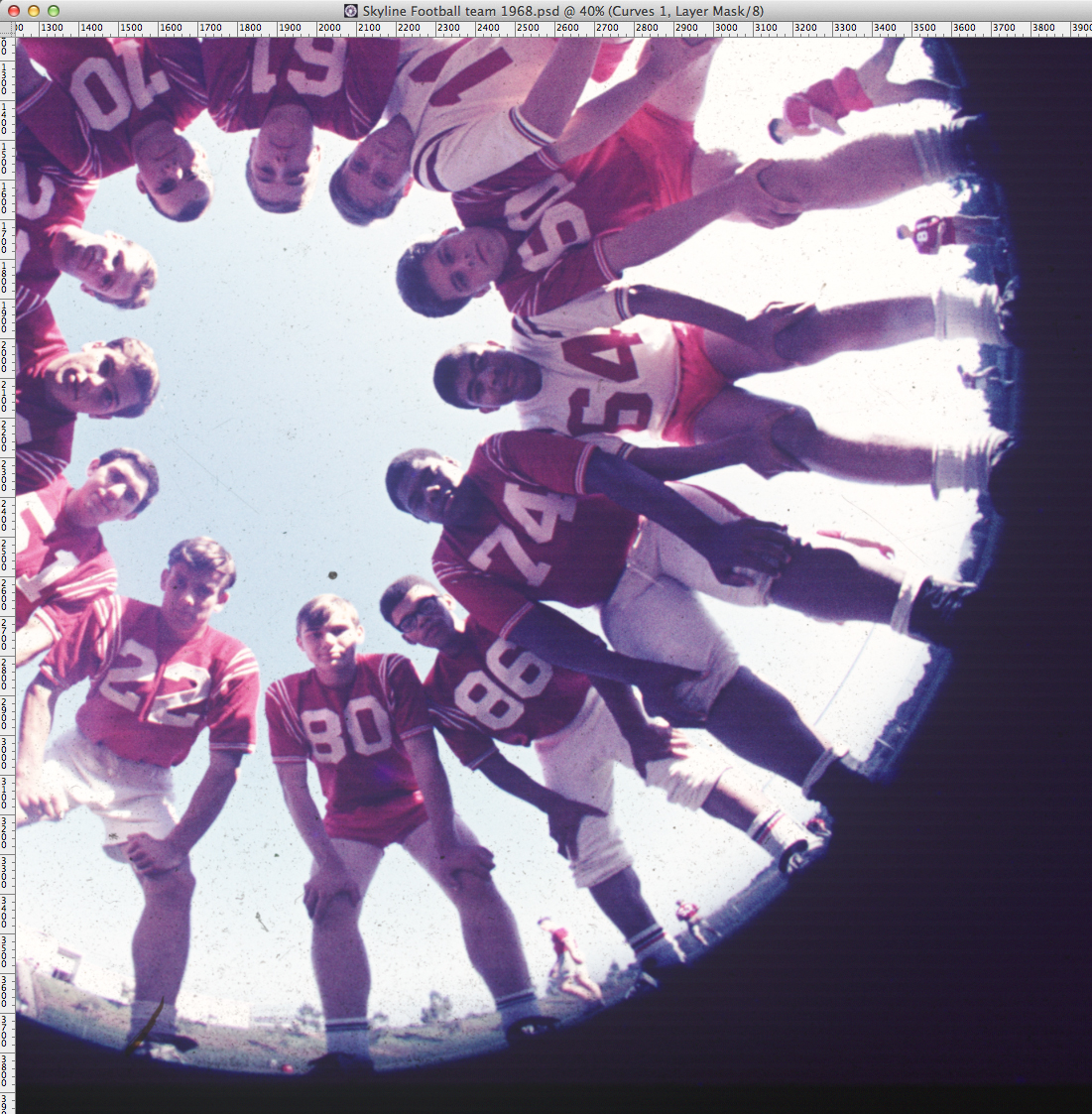 This is the Skyline High School 1968 varsity football team. The photo was taken with an 7.5 mm Nikkor fisheye lens. Dust and crud accumulated over the years in storage has damaged the images. But, Digital ICE technology in the scanner can fix this, and the results are spectacular.

Digital ICE requires a scanner to have an extra light emitter and sensor, one that uses infra-red light. This sensor scans the film (or print) being captured, and the resulting signal is used to create a defect map, an image of all surface imperfections like dust, fingerprints, and bubbles in the emulsion. 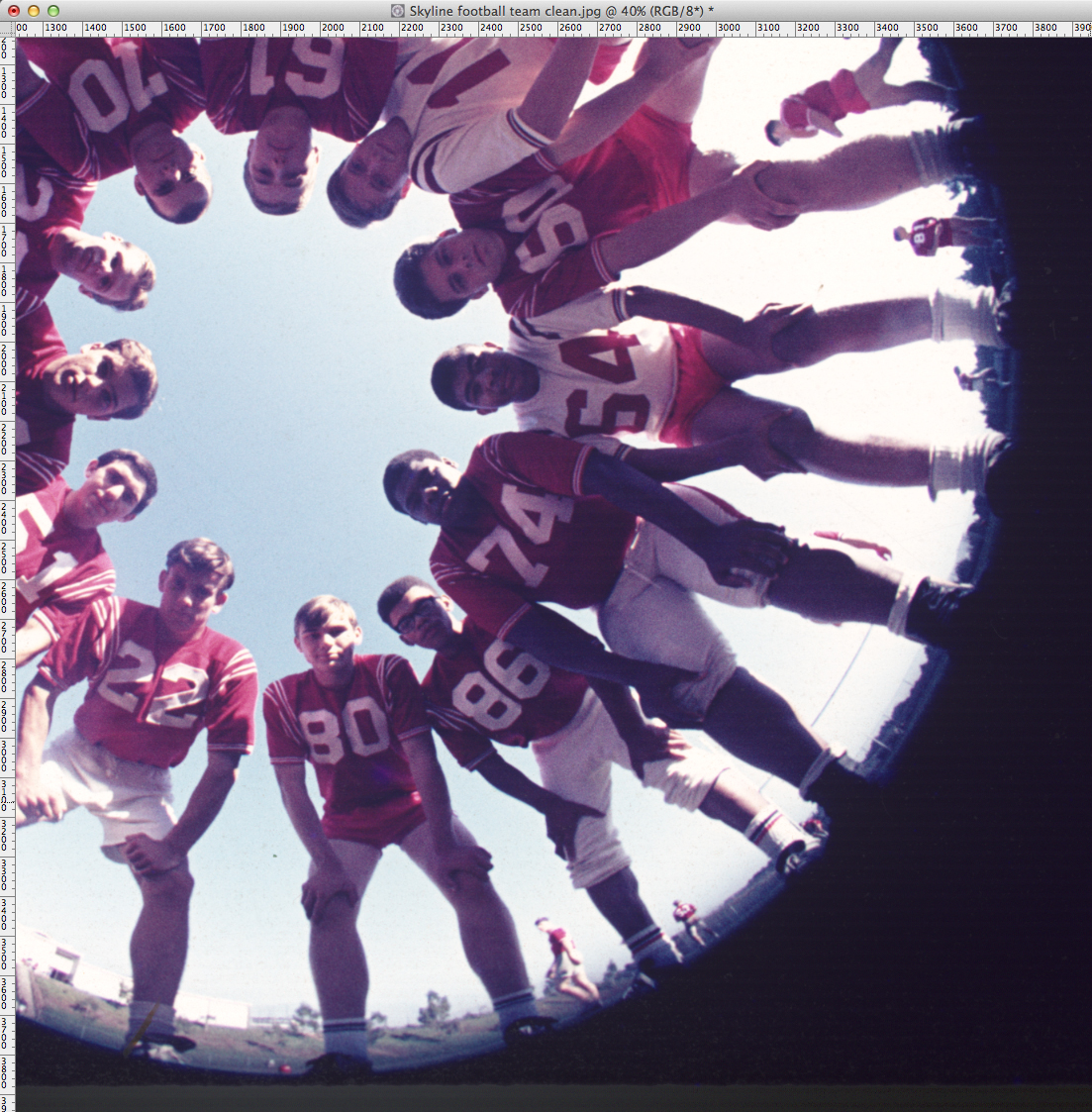 This is the same image scanned with ICE turned on (VUEscan calls it “infrared cleaning.” The result is dramatically better. This means lots less time in retouching and image correction.

The defect map is then used to subtract those flaws from the scan, resulting in a near-perfect image.

When I first saw Digital ICE, I was given a “tour” of its features by my friend Mike Rubin at Nikon in Hauppauge, New York. Mike took his finger, and, while explaining the technology to me, rubbed the side of his nose. He then took the same finger and planted a big fingerprint on the 35mm film we were about to scan. 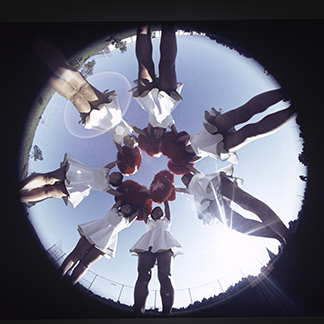 This is the companion cheerleader photo, after cleaning with Digital ICE. Looking back to 1968, I wish I had added a flash to the camera to illuminate the faces of the cheerleaders, or perhaps I could have spread aluminum foil under the camera to reflect light back upward into their faces.

He then raised the bar by taking a piece of fine sandpaper and making a glancing stroke across base of the film, creating a row of surface defects that would have ruined any chance of making a good photographic reproduction of the film.

Then Mike put the film into the Nikon CoolScan scanner and demonstrated Digital ICE to me. He scanned once with ICE turned off, then again with ICE turned on. In the first case we got the whole thing – fingerprint and sandpaper marks. In the second it was like nothing had happened to the film. I was dazzled.

Years later, I am still dazzled.

I still use my Nikon CoolScan scanners (I have two, a large one and a small one). Several years back the Nikon software checked out, being incompatible with the new Mac OS, and so I switched to VUEscan, which is reasonably priced, and takes full advantage of the features of Digital ICE, ROC and GEM the trio of scanning correction and repair tools originally provided by Nikon’s software.

The images that got my attention this past week were some that I took in 1967 and 1968. I was the high school yearbook photographer at the time, and I had a new Nikon F camera that I had bought with money I made with my little printing business (more on that in another blog).

I had an idea for a photo of the football team (and eventually the cheerleaders) to have them huddle around a circular fisheye lens and take a photo. The image would be a complete circle with the football players all around the circumference of the image, heads in the center. I borrowed the lens from a friend who was a photographer for the Oakland Tribune. It came in a brown leather case with a velvet lining, and it was a huge, heavy convex lens that managed to bend the entire world into a circular image on a 24 x 36 mm frame. 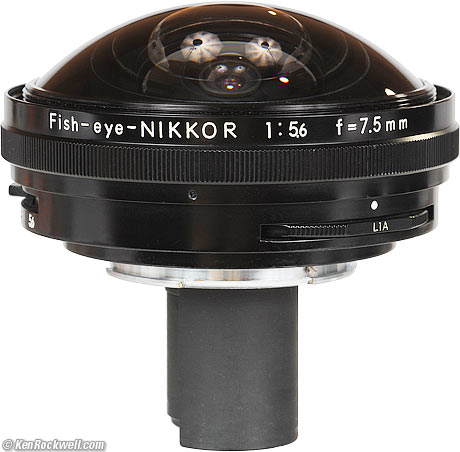 This is the kind of lens I borrowed for the shots above. I have “borrowed” the photo from the web site of Ken Rockwell, who has a nice description of the lenses made by Nikon and others in the 1960s.

The photos of the football players and the cheerleaders were exceptional – and I think one or both appeared in the yearbook. Over the years I have stored these in a binder in evil clear plastic sleeves. The fact that these are mounted transparencies is probably the reason that the film is still intact. The reason I call them evil is that these plastic pages proved over time to be damaging to film stored in them.

But, my film has accumulated dust, and has some physical damage from its times being wrapped around the drum of a color scanner (perhaps).

When I scan them without Digital ICE, I can see all the dust and crud. And, when I enable to Digital ICE tools, I can enhance the quality of these images to make them look as good as they did in 1968. It’s really amazing.

Brian Lawler is an Emeritus Professor of Graphic Communication at California Polytechnic State University, San Luis Obispo and was a Guest Professor at Hochschule München from September, 2021 to September, 2022. He writes about graphic arts processes and technologies for various industry publications, and on his blog, The Blognosticator.
View all posts by Brian Lawler →
This entry was posted in Gadgets, Photography and tagged Blognosticator, Brian Lawler, defect removal, image defects, scanning. Bookmark the permalink.