Powering a time-lapse camera for an extended period of time

I use a Canon T2i camera and a variety of lenses to make time-lapse movies. From time to time I take thousands of photos, and for that I need a special power supply. The standard battery for the camera is a Canon 1200 mAh battery which usually lasts for at least 1,500 frames.But in January I went out on (of course) the coldest night of the year to photograph the night sky. I was taking star trail images at 26 second exposure every 30 seconds.

I was controlling the camera with an intervalometer that I bought from a vendor on eBay. It was made in China, and shipped from China for about $18, and after I ordered it, it arrived by U.S. Postal Service in two days (I can’t get domestic mail delivered outside my own county that fast).

In the cold dark of January 12 I was running my T2i and my Canon 1ds Mark III, each taking similar star trail photos of the night sky. The T2i worked for several hours, then the battery – suffering from the extreme cold – gave up and the camera stopped taking photos.

My other camera continued to shoot long into the night, and had it not been for a cloud cover that arrived in the early hours, I would have a very successful time-lapse movie of the night sky. In a word, the night photography effort was a bust – mostly. I did get one post-sunset panorama against the distant mountains that is really lovely.

This is my just-past-sunset photo taken on the Carrizo Plain of eastern San Luis Obispo County, California. If you click on the image, you can see it at twice this size.

So my efforts at time-lapse were not terribly successful that night. Part of the reason was that I was too cold to make clear decisions, and my hands didn’t work well. It was 16 degrees Fahrenheit that night, and that’s too cold for this California boy.

When I got home the next day and got warmed up, I started working on two solutions to the shooting all night problem. One was that I discovered a way to turn off the control screen of the T2i. On the back of that camera, just below the viewfinder, are two tiny windows covering an IR emitter and an IR sensor. These detect the presence of your face when you put your eye on the viewfinder. By covering those with tape, I can get the camera not to illuminate the LCD screen on the back of the camera at all. This saves a considerable amount of battery power, and also reduces the irritation that one causes to other astronomers when that LCD panel flashes on and off.

The second thing I did was to build a replacement battery that is outside the camera, and which has about three times the power of the internal battery.

I thought about building this myself out of a small block of wood, but then I found exactly what I needed on eBay, again from a Chinese supplier. The product is a 110 volt AC power supply for the Canon T2i (and several other Canon cameras). It included a 110 volt power supply, a battery “cheater,” a cord that sneaks out of the body through a little rubber gasket, and a long wire. Buying the Chinese battery substitute cost me about $18 and it took, again, two days to get here from Hong Kong. I couldn’t have built one for $18.

I didn’t want a power supply for 110 volts AC; I wanted a field capable battery pack that will run far from household current. I cut the wire from the 110 volt adapter, and I put it in e-waste. Then I looked on Amazon for a large 7.2 volt battery to replace the power supply. This turned out to be easy because model airplane and boat hobbyists use batteries like the one I needed. I bought the most powerful model I could find, and I bought a charger, and I spent another $30. 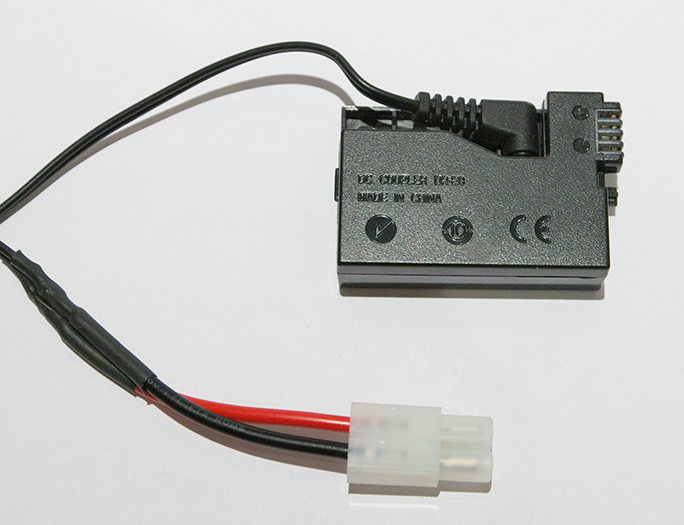 This is the battery “cheater” which is the same size as an internal battery. The cable winds out of the camera to a Molex connector on the other end, which connects to my large battery pack for the camera.

When this stuff arrived in my mailbox, I soldered the ends of the wire from the camera to a Molex connector provided by the battery manufacturer, and I was in business in a matter of minutes. One caution: most electrical cables have the positive conductor marked with a printed white stripe (on a black cable). The power adapter I bought from China had its wires reversed, so that the striped conductor was negative. I discovered this before I wired it, and put the device into my camera, savong it from having 7.2 volts run backward through it. 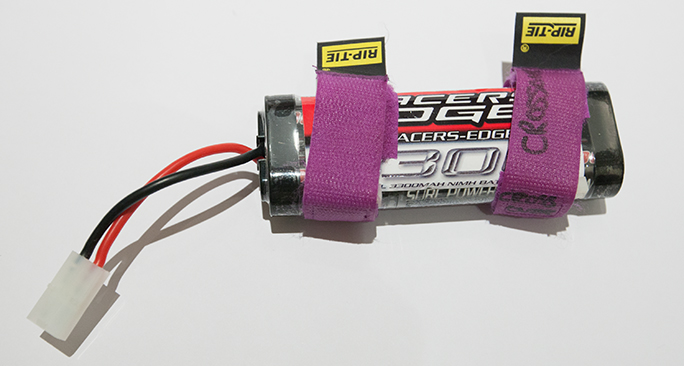 This is the 7.2 V battery pack for the camera. Made for model airplanes and boats, this powerful battery will run my Canon T2i camera for over 4,000 photos. The Velcro strips are to secure the battery to my tripod.

With a fully charged 7.2 volt battery, I can run the camera now for more than 4,000 frames without the battery dying. And in cold weather I can insulate the battery in a wool wrap inside a nylon carrying bag to protect it from freezing. 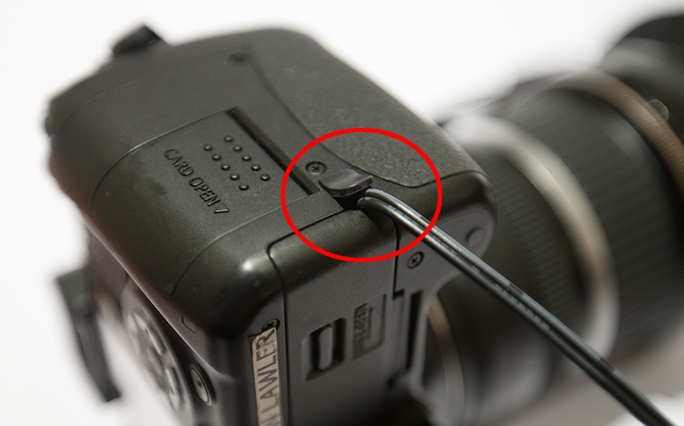 Here the battery power cable exits the camera body through a small rubber door that is provided for the purpose. The wire to the battery is about one meter in length.

Charging takes under an hour, and the whole thing is a great success. I also have rigged a parallel plug so that I can plug two of these 7.2 volt batteries in at the same time, giving me almost 7,000 mAh, which would allow me to shoot for days.

I would need to change memory cards in that circumstance, and I would have to do it quickly. I’ll try that some night while I am out shooting the night sky. I plan to do this at least once in the next month, but I am waiting for the right night when there is no moon, and that happens only once every 28 days.

Brian Lawler is an Emeritus Professor of Graphic Communication at California Polytechnic State University, San Luis Obispo and was a Guest Professor at Hochschule München from September, 2021 to September, 2022. He writes about graphic arts processes and technologies for various industry publications, and on his blog, The Blognosticator.
View all posts by Brian Lawler →
This entry was posted in Photography and tagged battery, Blognosticator, Brian Lawler, long battery life, time-lapse, time-lapse photography. Bookmark the permalink.