The Mask of Zero!

This episode originally appeared on What They Think in February, 2011.

In my continuing effort to make masking easier (nearly impossible), I have come to the conclusion that masking technique must be selected on an image-by-image basis. There is no single tool for making a successful mask. Instead, it is a combination of tools such as Mask Pro (described in my previous blog on the subject) and the Refine Mask tool in Adobe Photoshop that make the best masks.

Those tools, and a lot of hand work, make a perfect mask.

For today’s episode I decided to make a mask by hand, using the brush tool. My only “special” consideration was the hair, on which I used Photoshop’s Refine Mask tool to improve a bit on my work. It added a bit of realism to the hair, and I am happy with the result. The rest of the mask was made the hard way, which is to say I painted around the figure to remove it from the background.

I never do this on the photo itself; instead I paint on a Layer Mask, which can be added to any unlocked layer in Photoshop. Then it’s just a matter of choosing the painting tools and investing an hour or more to the task.

In this example I spent about 65 minutes, which if I were charging for my services, would be a charge of about $130.00, and that’s a lot to charge to mask an image – especially one that appears so simple. I could have done it faster (see my earlier blog on using a modified channel to accomplish a similar effect). But on this one I didn’t want to do it faster, so I did it the hard way and I timed myself.

The hardest part, after the hair, was the zipper. That took a little more time than just pushing the brush along the edge of the image. I used a hard-edge pencil tool and drew every gap between the teeth, then I used the same tool to paint along the outer edge to complete that section of the mask. 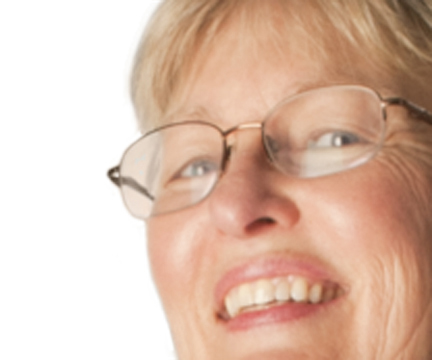 Here you can see the effect of my mask through the edge of the eyeglasses.

The next-hardest part was the eyeglasses. A mask on eyeglasses must be partially-opaque, as the glass lenses in the frames have imagery in them. For that I painted with a light brush on the mask, allowing part of the original image to show-through, but also masking it. It’s tricky to get the frames to appear realistic, but I seem to have succeeded there. 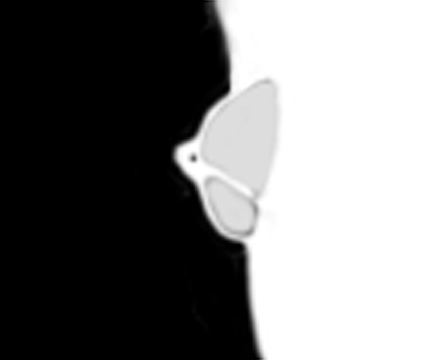 The mask is successful, very clean, and commercially acceptable. Putting the model on top of an alternative background proves its real quality; it looks very convincing. 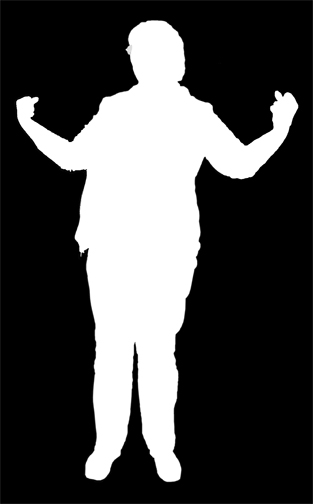 This is the complete mask. The zipper that caused the difficulty is on the left side of the jacket.

Brian Lawler is a Professor of Graphic Communication at California Polytechnic State University, San Luis Obispo. He writes about graphic arts processes and technologies for various industry publications, and on his blog, The Blognosticator.
View all posts by Brian Lawler →
This entry was posted in Photography. Bookmark the permalink.