Ink is a terrible thing to waste

I’m teaching this semester in Munich, Germany, at the Hochschule München, or more correctly, Hochschule für Angewandte Wissenschaften München. It’s just a few blocks from the city center on Tram route 20. We have about 20,000 students on several campuses.

It’s a technical university where they teach in the same proud tradition as we do at Cal Poly – Learn by Doing. It’s all hands-on, all the time, and that shows in the many interesting projects that one sees on campus and off.

My classes are one in photography, one in advanced typography, and one called Projekt. It’s a senior-level course in project planning and execution. My students are dedicated, respectful and eager. I’m having a great time here. 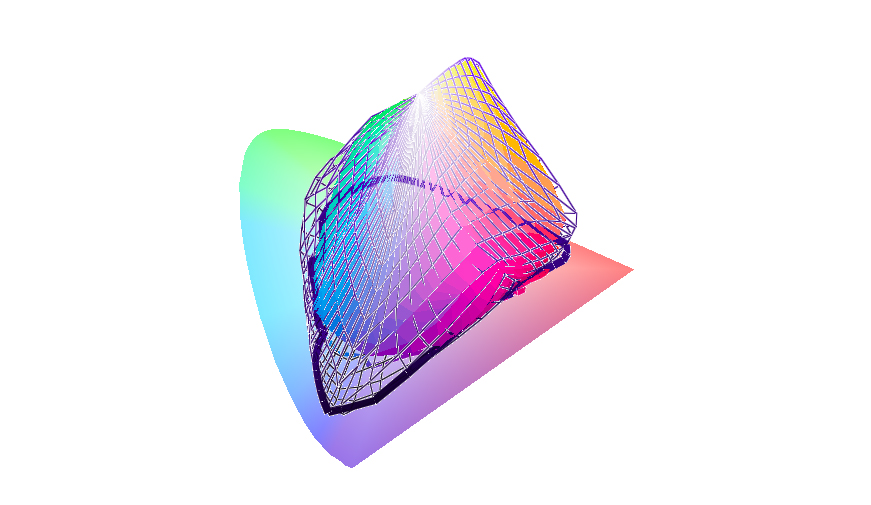 This is the gamut comparison between the Epson on Tuesday afternoon and the FOGRA 39 standard. The Epson is slightly larger, but I expected more.

In the photo class I needed to print panoramic photos, and there is an Epson 9900 Stylus Pro printer in the lab (along with three smaller Epson 4800 printers). The 9900 features more base colors of ink than the others, and it is wider, so I wanted to use it for my course. Unfortunately, the printer had not been used for quite a while.

And, as everyone knows, an ink-jet printer sitting idle is the Devil’s paradise. I started it up and immediately learned that the ink was low on the light-light-black channel, the cyan channel, the orange channel and the green channel. Fortunately an inventory of inks was on-hand and soon I was running. But then the waste cartridge on the right side was filled and the machine stopped. A day later another was found and I was back in the game. 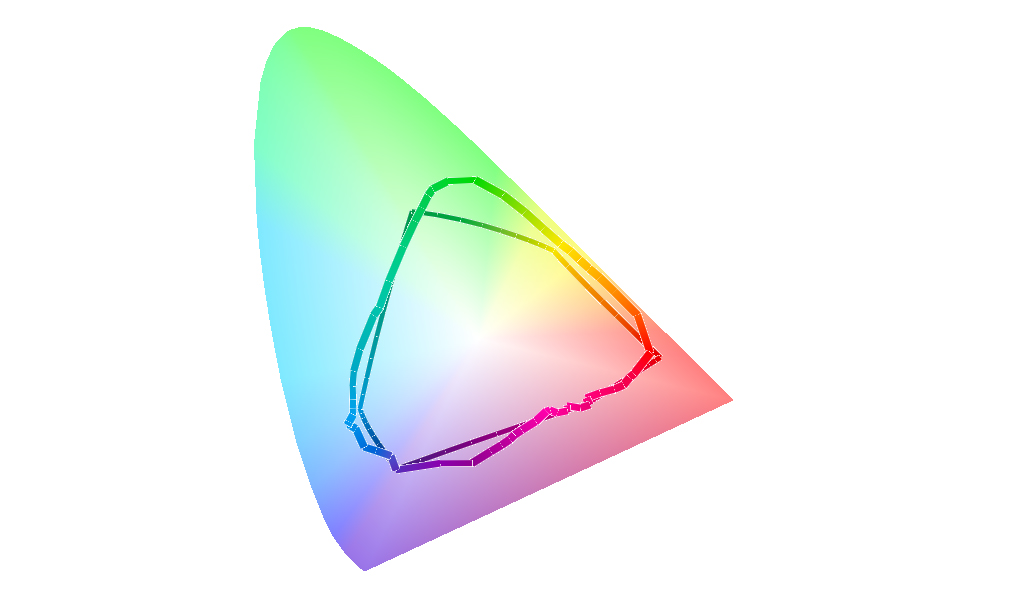 This, again, is Epson (Monday) vs. FOGRA. It was acceptable, but not at all what I would have expected from an ink-jet printer with CMYK plus orange and green base colors. The hardest thing for me to accept was that there would be more cyan in FOGRA than on the Epson; that was illogical.

The quality was marginal. I was getting streaks and breaks in horizontal lines. I own an Epson of this same size at home, so I am experienced in the troubles that ink-jet printers can have. I have used that printer continuously for many years and have had almost no trouble with image quality of head clogging. The more you use an Epson, the better it works. This one, however, was sitting and some of the ink-jet nozzles were clogged.

I ran a cleaning cycle on the Hochschule München Epson. It ran better. Then I ran an ICC profile patch set and profiled the printer. The resulting gamut of colors was OK, but I suspected that something was amiss. My printer at home is a 9600, which has “only” seven inks, and an amazing gamut of colors, one which encircles all CMYK printing devices and makes really beautiful photo prints. 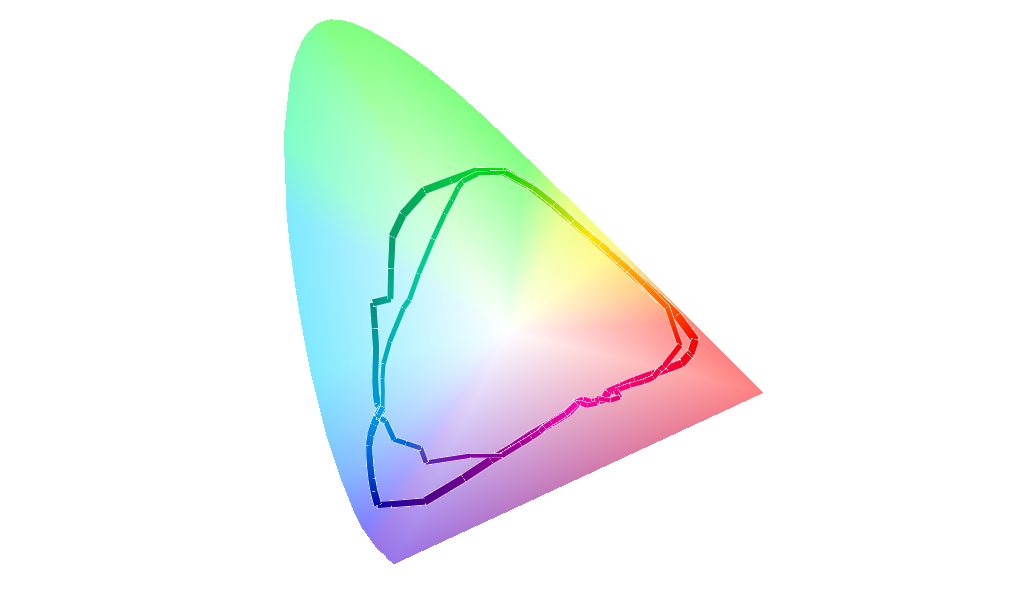 This is Epson Wednesday afternoon – after several cleaning cycles – compared to the same printer the day before. It was definitely getting better.

This printer in Munich has an even larger gamut I suspected because of the presence of Orange and Green inks in the 12-ink stable (only 11 are used, as there are two exclusive dark black inks).

On Tuesday I ran out of Cyan altogether, so I headed to the very impressive Calumet Photo store in downtown Munich and bought a new cartridge of Cyan (€143.55 with VAT) and took it back to the university. Soon I was running on all 11 cylinders again. I ran another ICC profile, and this time the gamut looked better.

But I was still troubled by the fact that the overall gamut of colors was only slightly larger than the gamut of FOGRA 39, a CMYK gamut for printing presses. So, I ran diagnostics and discovered that I was getting significant cut-outs on various color nozzles: green, orange, cyan. The streaks persisted. I ran another cleaning cycle, which uses a tremendous amount of ink (which is about €1250 per liter). Things got better, but I was still getting errors of clogged nozzles, so I ran another cleaning cycle. This was starting to hurt. 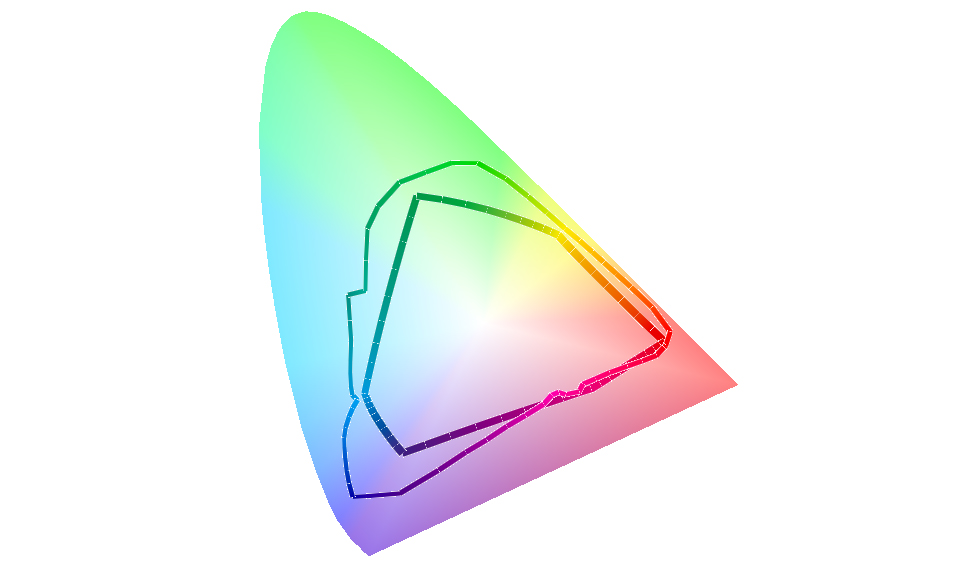 …and this is the Epson Wednesday afternoon compared to FOGRA 39. This is much better than when I started. I suspect that there may still be more color possible on this machine, but that may take another day of cleaning and printing.

I ran the nozzle alignment test, which seemed to work perfectly, so I moved back to the cleaning cycles and test prints.

By Wednesday afternoon I had the machine performing nearly perfectly. The streaks were almost gone, and prints were starting to look quite good. I decided that my next cleaning cycles would be to run some of my student work. Rather than just pump ink through the nozzles and into the waste cartridge, I wanted to put that ink onto photo paper.

I ran three panoramic images, and they looked good. Another round of profiling revealed what my eyes were telling me earlier: the gamut of colors was just not good enough for that machine. Analysis of the new gamut showed that I was finally using all the colors on the printer – strong cyans were showing, much more green and considerably more red and orange were finally showing up in the charts.

Today I will run some more work through the machine in hopes that that few misfiring nozzles in cyan, orange and green will clear up and give me the results for which the Epson 9900 printer is so famous.

It has taken three days of solid effort, probably €500 worth of ink, and a good part of a roll of GMG proofing paper to get the machine running well again. It has been worth the effort in seeing the results.

June 22 addendum: Yesterday I turned the printer on to run some student work, and I sent a job to print and NOTHING came out! All of the ink-jet nozzles were clogged. NOTHING! So I ran a Power Clean, which is a utility run on the machine itself. I ran an errand while this was running, and I returned to find that about 98 percent of the nozzles are now working – the best yet. I printed several jobs and the output is spectacular. I don’t know what caused the failure, but the results are great now. I plan to run one more profiling test today to see if the gamut is better.

June 23 addendum: After yesterday’s success in getting the ink jets clear, I decided to run a calibration/profiling test of the printer now that it’s printing with all of its many colors of ink. The results are impressive, and they justify the effort I have taken to restore this machine to full working condition. 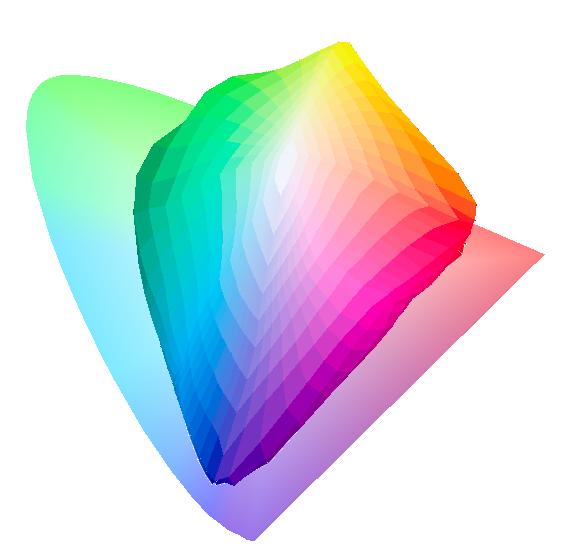 This is the gamut of the fully functional Epson 9900 printer. That’s more like it! My experience with ink-jet printers over the years has shown me that this is more normal than exceptional.

When compared to the first day’s gamut, the colors look like this: 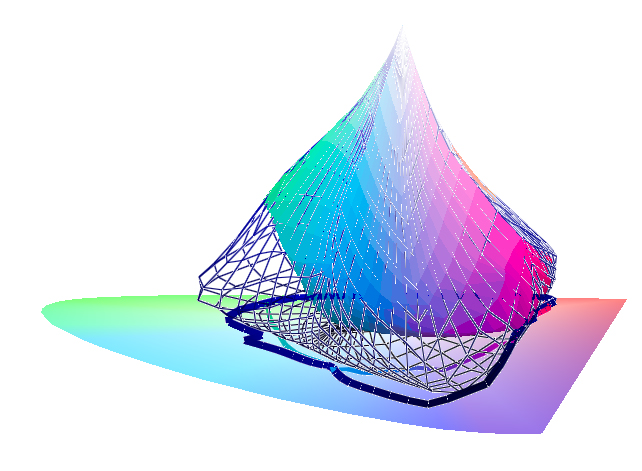 The wire frame shows that there is a tremendous amount of green and cyan (left edge) printing now that was not in the gamut in May. This is exciting!

The big problem, though, is how do I keep the machine from drying-up again?

2 Responses to Ink is a terrible thing to waste