Planning and preparation pay off

How do you explain to students, children, associates, business partners – anyone – how important it is to plan?

I am a pretty good planner, and I was especially careful to plan my photo exhibition that opened last Friday at the San Luis Obispo Museum of Art.

I started 18 months ago with a written list of objectives, and then I expanded that to include details of how I would promote the event, invite guests, teach seminars, print photos, mount photos, order foam core, mount photos of foam core, and much much more. I followed the list line by line, checking it several times every day to ensure that I hadn’t missed any opportunities or deadlines. I used color to indicate the status of a topic: black for planned, green for a project begun, magenta for a project completed. 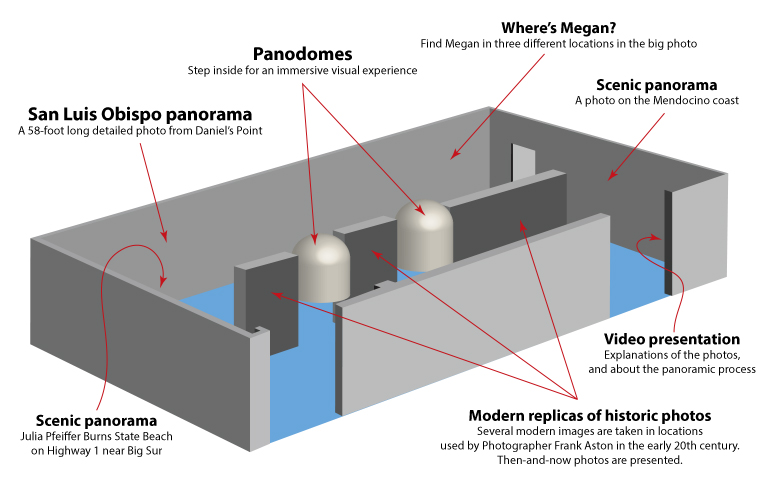 This is an illustration I drew to show the overview of my exhibition of panoramic images at the San Luis Obispo Museum of Art. This was draft 2 of that plan; the first one hadn’t left enough room for people to see the big photo.

Let me tell you about self-adhesive foam core. It can be purchased in stock sizes up to 4 x 8 feet, and it ships from Chicago. Arranging to purchase enough of it to make it worthwhile to ship here was a concern. I thought I needed only ten full size sheets, plus two cases of 40 x 60 inch, and two cases of 32 x 40 inch material. I ordered it all at once, and it arrived on a huge pallet in a big truck. I live in a small house on a one-way street, and needless to say, I don’t have a fork lift. I arranged to borrow a pick-up truck, and I drove it to the trucking company warehouse where the nice folks there helped me to cut the straps and load it off of the pallet and into the truck.

I used up all the big sheets, and because I spoiled two of the largest photos in the show, I needed to order another ten sheets of the same material. This time the pick-up wasn’t available, so I loaded it onto the roof of my station wagon, tied it down, then drove it home – very carefully.

Another challenge with foam core is humidity. Several years ago I ordered a case of 32 x 40 foam core from the same supplier in Chicago. It arrived, and I mounted photos on it. A few days later, those photos bent into arcs which were impossible to flatten. It seems that the humidity on one end of the journey was different enough from the other end of the journey that the moisture escaped, but was trapped on the adhesive side. It wasn’t a disaster, but I did learn a lesson – let the foam core acclimate before applying a photo to it. 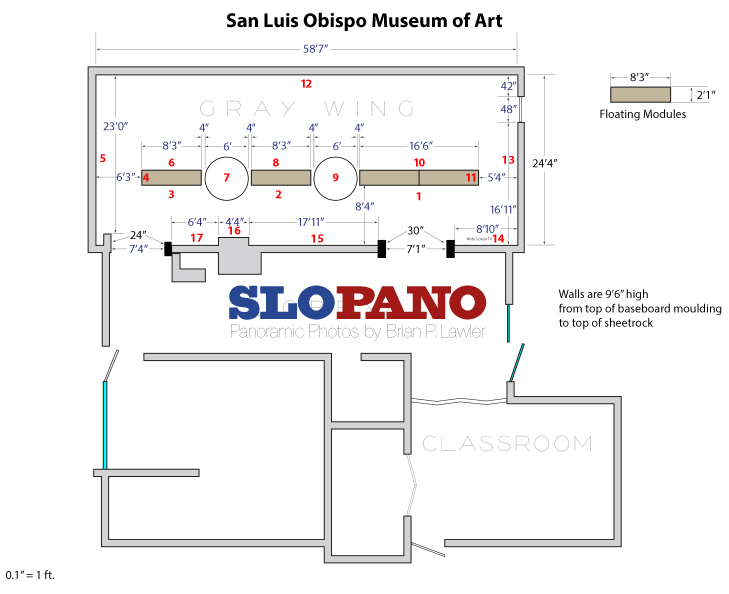 This was my precise floor plan of the museum. I went to the museum twice with tape measure and clipboard in hand to get the measurements, and then I went back to double-check my work. This paid off, because everything fit exactly as I had planned.

I worked with various suppliers to have enough paper and ink on-hand to make all the prints I needed. I never ran out (except once when I ran out of paper for a day due to a shipping error). There were nights when I was printing my huge 58-foot long panorama when I changed ink cartridges in my Epson 9600 two or three times. I always had extras on the shelf. There was just too much to lose if anything went wrong to take chances, so I ordered extra ink and paper.

I knew when the photos had to be moved from my home to the museum, and I knew when the Panodomes needed to be finished. It all had to come together at the same time, and there was little room for error (none for the largest prints because I didn’t have time to reprint those).

This is one wall of the museum from my scale model. It includes sight-lines, dimensions, and scale illustrations of each item I wanted on the wall, exactly as I wanted it placed.

I printed a large exhibition catalog and poster, and ordered cardboard tubes for the posters. A pallet of printing showed up in a big truck, and the driver kindly cut the straps and unloaded the pallet from his truck to my driveway. I moved all of it inside that evening. Floor space was at a premium in my living room. The downstairs bedroom was filled with boxes of folded catalogs and huge sheets of foam core.

With just 15 days left before moving day, I packed my saddle bags on my bike with cameras and tripod and strobe flash equipment, and I pulled on my jacket, and put on my gloves, and checked my helmet, and rode off to school. The day was to be filled with event photography of International Printing Week, and I am the “official” photographer for that event. 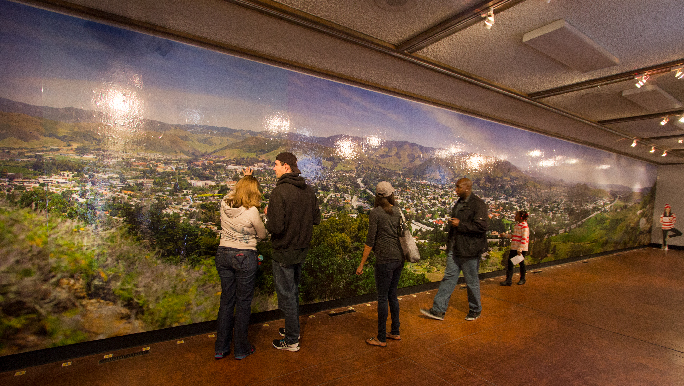 This is the big photo – 58 feet, 7 inches in width – across the long wall of the museum. In this photo you see people examining the detailed photo and looking for their homes, offices, schools – and three images of Megan (she’s over on the right).

About a mile from my home, as I rode through a busy intersection in the bicycle lane, I was struck from the side by a pick-up truck. Moments later I was on the ground, fully aware that I had been severely injured by the collision. I froze. All sorts of crazy thoughts went through my head: how would I get the photos out of the house? Was my back broken? Could I still open the exhibition on time? Could I move my toes? What was that pain in my right hip? It was fascinating, and very frightening.

I heard sirens, and I knew they were coming for me.

That event changed everything. I spent three days in the hospital, then three days in a friend’s home, then four days on the first floor of my home (I couldn’t get up or down stairs). Eventually I made it upstairs by sitting on one stair, and scooting my butt to the next stair, and so on. Standing with a walker on either end was stunningly painful, but I managed. A friend of a friend I didn’t even know brought a ramp to my house and installed it at my kitchen door. That ramp allowed me to shuffle up and down from the driveway so I could get to my physical therapy sessions.

I was getting a little bit better every day. And, the show deadline was fast approaching.

I had organized a team of volunteer helpers to get the photos out of my house and to the museum, and had concocted a scheme to hand-carry the photos to the museum because there was no truck readily available of a size to transport them to the museum. That scheme turned out to be folly because it was raining just two days before the move date. Rain would ruin anything it touched, and I couldn’t risk that, so the museum rented a 16-foot truck for the transport.

It didn’t rain on moving day.

My friend Catherine Trujillo came over one day and announced that she would simply take over the event – lock, stock, foam core and barrel. And she did a spectacular job of it. Though I still had some minor responsibilities, the exhibition shifted from being entirely on my shoulders to being entirely on her shoulders. She ran, she planned, she organized the teams and the truck and the deadlines, and everything worked. 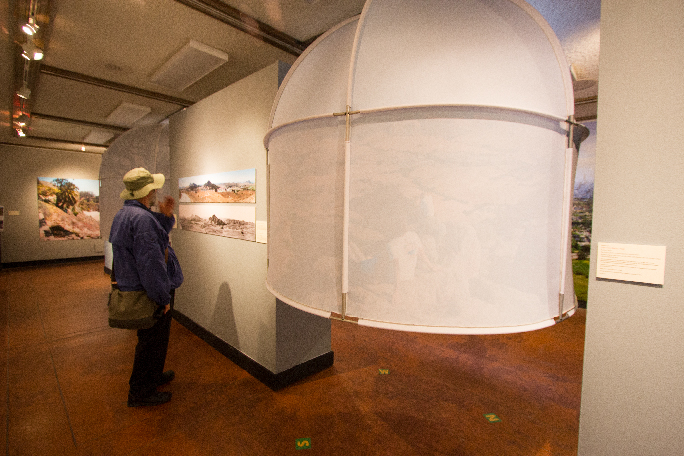 In this photo you see a couple studying the two photos of Camp San Luis Obispo on the wall. To their right is one of my Panodomes, containing a spherical image taken from the top of 1,559-foot Bishop Peak on the edge of the city. People stand inside the domes to enjoy the view from the top of the mountain, or the image of an oak forest.

Mounting the photos on the museum walls was taken over by the museum staff who worked from my detailed drawings. These came from a scale model I made last fall, and from the floor plan I made last summer. Though I was not able to help, I showed up in a wheelchair and I observed their work. It was expertly done!

On opening night I got dressed in my new suit (purchased in Hong Kong, and described in another blog), and my wife delivered me in my wheelchair to the gallery of the museum. The crowds gathered, I made my introductory comments, and we had a successful launch. It was more successful than I would ever have imagined.

This allowed me to put the sound of sirens behind me and enjoy the excitement of seeing my panoramic photos printed on huge sheets of foam core, mounted on the walls of the museum.

It all came off as planned.

Except for the unplanned part, and despite that, it still came off as planned because I had a plan.

2 Responses to Planning and preparation pay off