…another cheese sandwich and a GigaPan photo

It turns out that tying the camera to the GigaPan mount wasn’t adequate to make a successful panorama. So, even though I thought I could fix everything by straightening the horizons of 858 photos using the Image Processor and an Action in Photoshop, it did not solve the problem (though the technique is still valuable for those with a large number of images that need correction). 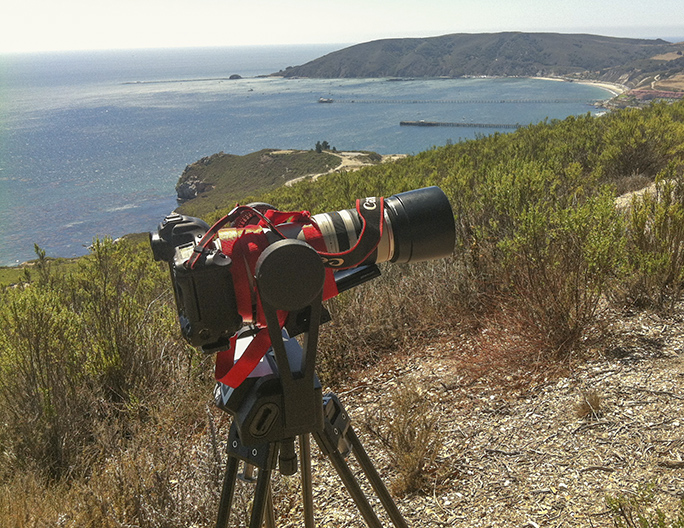 Here is my Canon camera and lens tied to the GigaPan mount. This didn’t work very well.

The camera must have moved inconsistently on the mount as it traveled through its rows and columns of images. The second stitch was almost as bad as the first, and equally unacceptable in the end. So I threw the whole thing away and hiked up to the top of the ridge again to do it over.

This time I tried focaccia for my sandwich, from a different deli. The hike up to the ridge was easier, even though I was carrying two tripods and two cameras. I will never understand my body and its abilities. The second camera and its carbon fiber tripod were light, and the hike isn’t that difficult, so I got up there, took 850-plus photos, then hiked back down, all in about two hours and 15 minutes.

The GigaPan image of San Luis Obispo Bay from Sycamore Crest. On the left in the distance is Pismo Beach, left-center distance is Point Sal in Santa Barbara County, and on the right is the town of Avila Beach with its three piers. You can see a larger version of this by clicking on the image, or go to GigaPan’s web site and see the ultra-high resolution version. In the far distance is China.

My objective was to test whether a GigaPan could/should be shot with the lens set to autofocus. In the GigaPan manual, they recommend fixed focus, and I have made all of my GigaPan images so far with fixed focus. But there is mention of autofocus in the GigaPan manual, and I thought that I would take two: one with fixed focus, and a second with autofocus turned on. Once I finished the first complete set of images with fixed-focus, I turned on autofocus and started a second round. It didn’t work, and it was obvious immediately. The autofocus did well when there was something in the foreground or middle distance, but the camera couldn’t get a fix on the blue sky, and I noticed immediately that it wasn’t shooting because it couldn’t focus. I stopped it as soon as I noticed this, then packed up and hiked back down the hill.

I checked that off my list of things to try.

I was shooting with my Canon 1ds Mark III body and my 100-400 Canon lens at the 400 mm end of its zoom. I focused carefully on the most-distant object I wanted in the image, set the exposure to give me maximum depth-of-field at f22, and then made the first set of images. This time I shot with 11 images in each column, 53 rows total. It is little shorter than the image I attempted to make a few days ago.

While the camera was shooting, merrily moving and clicking along, I savored my sandwich and a large part of my water. I sat in the shade of a well-placed Quercus Agrifolia just uphill from my perch atop the ridge line. A few people were hiking the trail behind me, and a some stopped to chat and ask what I was doing. I explained that I am shooting hundreds of photos to be stitched into GigaPans, and that my objective is to document the region from its various mountaintops. Everyone was interested in the camera, moving and clicking.

The images resulted in a lovely panoramic photo. There was a little more haze on the second day, and a fog layer in the extreme distance, but it won’t hurt because the ocean and the bay before me were as smooth as glass. A passing motorboat made a wake at one point, but otherwise the water was nearly still, and exceptionally beautiful. It was worth the hike to get back up there and take the photos correctly.

While stitching the photo, I encountered a problem that I have not encountered in my previous GigaPan images. After the stitching process was finished, and after I uploaded the image to GigaPan’s web site, I attempted to save the file as a Photoshop Raw image (the only format that will support an image of this size). After thinking for a while – about an hour – I received a dialog indicating that an unknown error had prevented the GigaPan Stitch software from saving the file. I tried saving the image as a TIFF, but that wouldn’t work because the image is too big for TIFF. So I canceled, and gave up.

The next morning I tried the whole process again, stitching the image over again and attempting to save it as a Photoshop Raw file. No go. I cancelled another time and set the job aside for a few days. Today I tried it again, and this time I tried a feature I have not attempted before, that being the stitch at half-size function in GigaPan Stitch. When finished, I saved it to my computer again, and I succeeded. I guess I will never know what caused the full-resolution image to fail.

Click here to see a time-lapse movie of the GigaPan mount moving my camera.

This afternoon I am returning to the plaza in front of Mission San Luis Obispo de Tolosa to make a second pass as a GigaPan in a populated situation. One I made in June was odd because of the bits and pieces of people captured by the camera as they – and it – moved around to take the photos. Results of that experiment will be posted here in the coming days.

Join me in Chicago at GraphExpo!
1:00 pm-4:00 pm, Saturday, October 6
for my seminar: PDF File Preparation for Success in Color Printing

You can save $50 on your registration by using the special discount code: SAVE50

Brian Lawler is an Emeritus Professor of Graphic Communication at California Polytechnic State University, San Luis Obispo. He writes about graphic arts processes and technologies for various industry publications, and on his blog, The Blognosticator.
View all posts by Brian Lawler →
This entry was posted in Panoramic Photography, Photography, Photoshop techniques. Bookmark the permalink.