The year 1933 must have been impressive for people living in and around San Francisco. 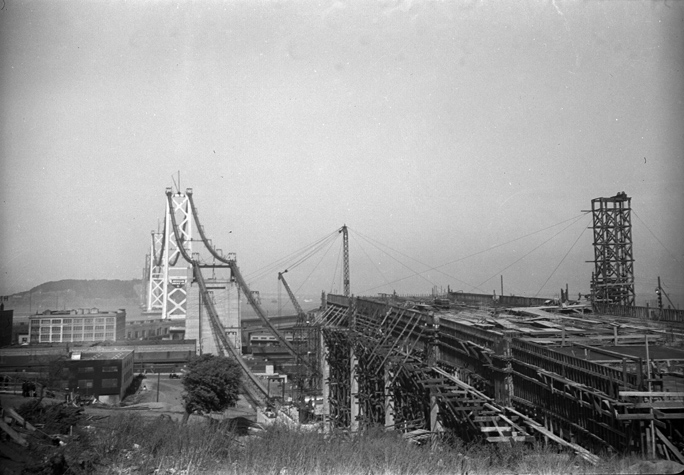 This is a view of the suspension bridge section of the Bay Bridge taken from the San Francisco side. The roadway approach is being built in this photo, and you can see the cable guides lying in the middle. The cables were not yet in place; they were spun in-place the following year. 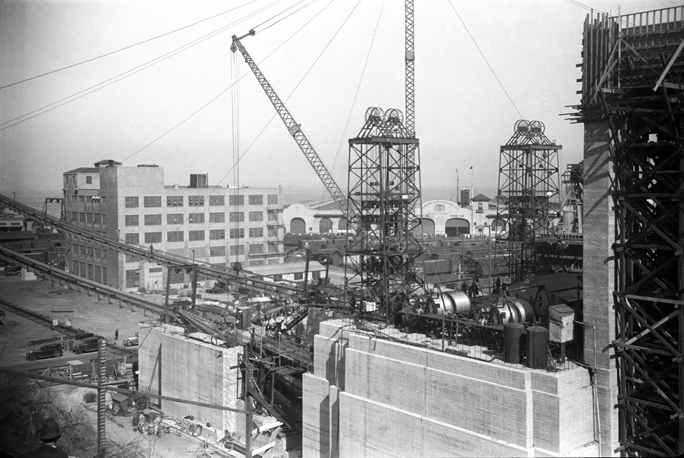 In this photo you can see the massive reels of cable on the winches atop the western anchor of the suspension bridge. There is a man standing in the cable raceway about one-third from the left, and two men standing behind the reels on the abutment in the foreground.

These were two colossal engineering and construction projects, and they were going on simultaneously. The Bay Bridge was started on July 9, 1933, and opened in November 12, 1936 at a cost of $77 million. The Golden Gate Bridge was started seven months earlier, on January 5, 1933 and was open to vehicular traffic on May 28, 1937.

My father, Russell Lawler, was a photographic witness to both projects, and I have been scanning the negatives he took of the bridges under construction during those years. My dad’s profession was insurance; at the time he worked for Pacific National Insurance Company, with his office in San Francisco. I think that his photography of the construction was purely amateur, but it could have been part of his job. I will never know. 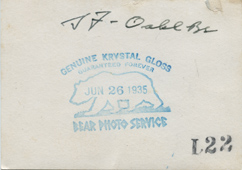 The Bear Photo Service stamp, and my father’s handwriting on the back of one of his Bay Bridge photos. My dad was smart to keep both the prints, which were contact-prints from the negatives, and the negatives themselves. I have been scanning the negatives for these blog posts.

His negatives are reasonably sharp, well-focused, and well-composed. They capture the construction on the San Francisco end of the Bay Bridge, showing the immensity of the work being done to build the huge span across the San Francisco Bay. The suspension bridge part of the span goes from San Francisco to Yerba Buena Island, then the roadway goes through a tunnel to a second span, which is a cantilever bridge that finishes the journey, landing on the Oakland side. At the time, the bridge was the largest steel structure in the world. 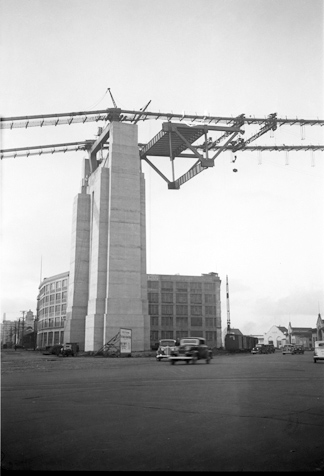 The device hanging from the cable raceways was used by construction workers to build the bridge, and eventually, to spin the suspension cables that hold the bridge up to this day. This tower is located on the San Francisco Embarcadero.

That cantilever section is being replaced by a lovely new suspension bridge replacement that is due to be completed next year. The cost of the replacement bridge is estimated to be $8.7 billion (over 100 times the cost of the original bridge not adjusted for inflation).

The original bridge had two-way traffic on both the upper and lower decks. The top was reserved for automobiles while the bottom deck was reserved for trucks. The bottom deck also had two sets of rails on which Key System passenger trains traveled. Those two lines of rails were set aside from the truck traffic by a steel barrier on the southern edge of the pavement. I remember riding the Key System trains across the Bay Bridge from Berkeley when I was a child.

The Key System trains, along with their counterparts in Los Angeles, were taken out of service in a famous cabal by General Motors, Standard Oil Company and Firestone Tire Company, whose efforts were focused on taking light rail systems out, replacing them with gasoline powered GM-built buses, and getting people to buy more gasoline and tires for their motorcars! The three companies were eventually fined $5,000 for their monopolistic crimes, and each company’s executive officer was fined $1.00 (I wonder how they survived that slap on the wrist!) 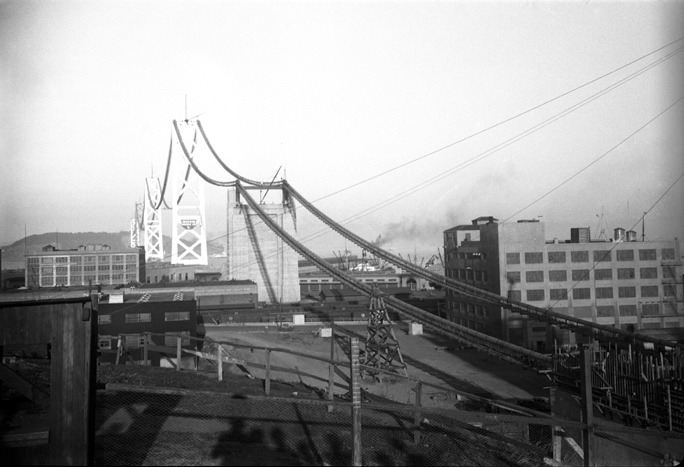 This image is interesting because we can see the four suspension bridge towers in the distance with the cable raceways in position. There is a cable landing in mid-section, where the cables are pinned to a huge concrete tower, and in the far distance is Yerba Buena Island. A tunnel runs through that island that connects the suspension bridge section to the cantilever section on the Oakland side.

One of these photos is dated in my father’s handwriting “S.F.-Oakland Bay Bridge Tower in Embarcadero. Photo from South. Taken 6/1/35.” On the back of each one is a logo of the Bear Photo Service. They were printed originally on “Genuine Crystal Gloss – Guaranteed Forever” and dated June 26, 1935 (some are dated later in the same year). I wonder if the Bear Photo guarantee is still valid.

I am enjoying the process of digging through old photos and bringing them into the 21st century. I hope that you enjoy viewing these images.

Brian Lawler is an Emeritus Professor of Graphic Communication at California Polytechnic State University, San Luis Obispo. He writes about graphic arts processes and technologies for various industry publications, and on his blog, The Blognosticator.
View all posts by Brian Lawler →
This entry was posted in History, People, Photography. Bookmark the permalink.