In praise of Data Rescue

For the past twelve days I have been toting cameras around, shooting thousands of photos of musicians playing in concerts around our county.

This is the time of the 42nd running of the musical bulls that we call Festival Mozaic. It is a musical event of high esteem, one that draws performers and audiences from around the world, and features music from all eras.

A scene from today’s concert by the Festival Mozaic Orchestra. Music Director Scott Yoo is at the podium.

The festival was originally named the Mozart Festival, but its name was updated a few years back to reflect its more diverse offerings, and now we locals know it’s time for the Festival Mozaic.

I’m the Lead Photographer for this wonderful event, and I have had two student assistants this past two weeks who have helped to document dozens of concerts, rehearsals, dinners, brunches, lectures and other events. It has been fun, and the music has been fabulous. 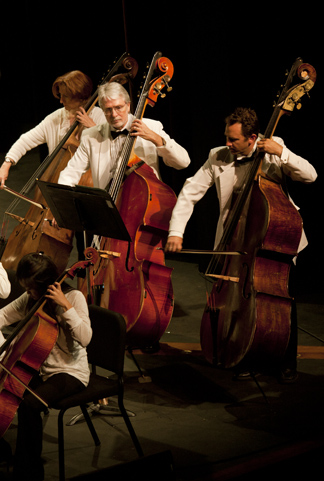 Bassist Ken Hustad in today’s performance. This is one of the recovered files from the Canon 1ds Mark III card. I also have the JPEG version, written to my back-up SD memory card.

I also use the Festival as a way to expand my photographic boundaries. This year I had as many as five cameras placed in a performance space.

On Friday evening I was in Mission San Miguel del Arcangel, one of California’s 21 historic missions, taking photos of the Festival Mozaic orchestra. I had a GoPro camera on a microphone stand over the head of the conductor. It was shooting HD video of the orchestra from that point of view (results: fair to good). I had a remote Canon G11 clamped with a SuperClamp to the pulpit in the Mission, looking down on part of the orchestra and the conductor (results: OK). This one was chosen because it’s absolutely silent, it shoots in Camera Raw, and it produces nice photos. I was firing that one with a Pocket Wizard transceiver. 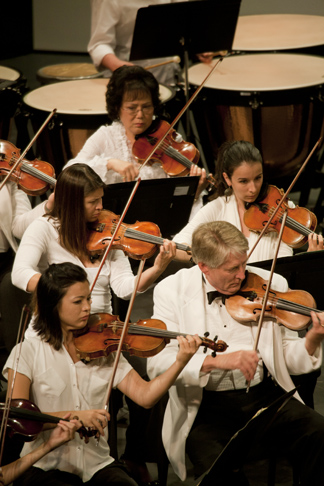 Some of the violinists in the orchestra. My photographic aerie allows me to shoot into the orchestra without impediment with a moderately long lens. In this case the photo was taken with the Canon 100-400 telephoto zoom.

Up in the choir loft I was shooting video with a Sony HD video camera trained on the orchestra, I had a Canon 5D with a moderate telephoto clamped on the railing shooting overall shots (fired by a Pocket Wizard), and I was shooting still frames with my Canon 1ds Mark III camera and a telephoto lens from the same vantage point. These two Canon cameras have very noisy shutters, so I muffled them with wool sweaters wrapped around the body and lens (works pretty well, but I have to limit my photography to the mezzo-forte and louder parts).

Today I photographed the closing concert at the local community college. I had three cameras in the lighting booth above the audience. I was located behind double-glass, so I could click away with aplomb, not bothering the musicians or the audience with my noisy camera work.

I arrived an hour early to set-up, and to photograph a lecture given by the Festival’s musicologist on the material that would be presented this afternoon. I started shooting, then remembered that I had failed to erase my memory card after yesterday’s photo event (I photographed 52 beautiful roadsters at a county park on Saturday morning, and a panoramic photo of the same 52 cars at their luncheon barbecue). With the few minutes I had before this afternoon’s concert, I decided to erase the 52 roadsters from my memory card (why? I had time). So, I stepped through each one, and hit the two-step buttons to erase them. It took a few minutes and I was done.

Then I drove home and started transferring the images from the cameras to my computer. Each night I send some of the more special images to the managers of the Festival, and they post them on a blog and in their web site. I also need to name and categorize the photos before I forget what happened in the concerts. It’s my style to title every photo from every event as accurately as possible; this helps me the following year when the designer asks for a photo of an individual performer or a specific presentation. It’s also good photo policy.

When I inserted the Compact Flash card from the 1ds (the one from which I had erased the 52 car photos), something strange happened. Instead of seeing my 394 photos from the concert, I had only the 90-something photos of the roadsters, and not a single Festival Mozaic image! This was a strange surprise, and not a pleasant one.

I do have a safety net, though. My camera has two card slots: one CF slot and one SD card slot. I record every photo I take to both cards at the same time, and I was doing this today. My SD card is set to record a back-up in JPEG-small while the CF card records in Camera Raw. I transferred all the photos from the SD card, but, I don’t like JPEG of any size, so I decided to attempt to recover the images from the Compact Flash card.

Data Rescue to the rescue! I own a copy of Prosoft’s Data Rescue software that I have used on the rare occasion where I have a corrupt file or a corrupt card from a digital camera. I started it to work on my Compact Flash card, and in about two hours Data Rescue had recovered all the photos from the concert today, and a few from previous concerts, and an extra copy of the roadster photos in case I need them.

Data Rescue is a sophisticated work of software that scans memory devices and hard drives and finds fragments of files. When it is finished with its scan, it does an amazing job of reconstructing images. All but one image made the trip, and I am now in possession of the photos from today’s concert in Camera Raw, which will give me the greatest resolution and file options in the future.

Hats off to Data Rescue! …and to Mozart!

Brian Lawler is an Emeritus Professor of Graphic Communication at California Polytechnic State University, San Luis Obispo. He writes about graphic arts processes and technologies for various industry publications, and on his blog, The Blognosticator.
View all posts by Brian Lawler →
This entry was posted in Mistakes you can avoid, Photography, Software. Bookmark the permalink.

1 Response to In praise of Data Rescue