Indent-to-here, and using GREP to insert it

This entry originally appeared in July, 2010 on What They Think.

A seldom-used, but extraordinarily powerful command in InDesign is the Indent-to-here command, which is generated by hitting Command-\ (Control-\ on Windows) at the point where you want an indent to occur.

You can accomplish the same thing by using a Paragraph Style with indents, the first of which is a negative indent, followed by one or more tab characters to establish the subsequent indentations.

The benefit of Indent-to-here is that you can decide to create an indentation anywhere using the command, and all of the text from that point onward will be indented, until the next carriage return. “Soft Returns” are included in the indent, so they don’t cancel the effect.

This paragraph of text is “normal” in that it runs-on. It can be made better by using the Indent-to-here command in InDesign (QuarkXPress also has one).

This second example has Indent-to-here placed before the “Suppose” which causes all text from that point, until the next carriage return, to be indented there.

Indent-to-here will work anywhere. Though illogical, the paragraph above demonstrates this concept. Wherever you put it, indentation stays there.

The second phase of this topic is getting the Indent-to-here command in there without having to go to the trouble to typing it in. InDesign supports what are called GREP searches, which is geek-speak for some very powerful search and replace functions that use “regular expressions” as either the search string or the replacement string.

Using Find and Change in InDesign, and using the optional GREP functions, it is possible for me to search-and-replace all of the numbered paragraphs (questions) with an Indent-to-here command. And, using similar search strings, I can replace all of the alphabetic answer lines with an Indent-to-here command. These differ only in that answer lines have a slightly different structure: tab, letter, period, tab, copy. And, each one is a letter as opposed to a numeral. 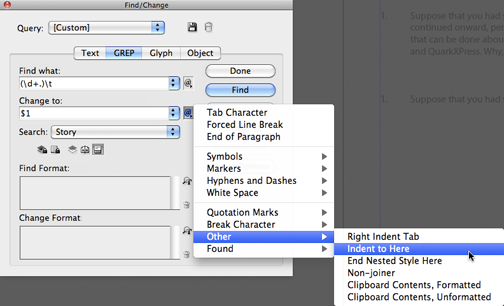 The example here shows the use of GREP to search and replace, adding the Indent-to-here command into the text.

This simple command is a life-saver for excellent typography.

3 Responses to Indent-to-here, and using GREP to insert it