The first streamliner – photos from the family archive

On March 15, 1934, my father, Russell Lawler took three frames (that still exist) of the first streamlined railroad train in U.S. history. I found the negatives of these frames recently while going through some family memorabilia. I also found prints of these frames, on the back of which is written the date and location in my father’s handwriting: March 15, 1934, Fresno.

The train, dubbed the M-10000 by Union Pacific, was the first train to be called a “streamliner” and the first not powered by steam. The train was designed by the Pullman Company, and featured a V-12 internal combustion engine that burned “petroleum distillate.” 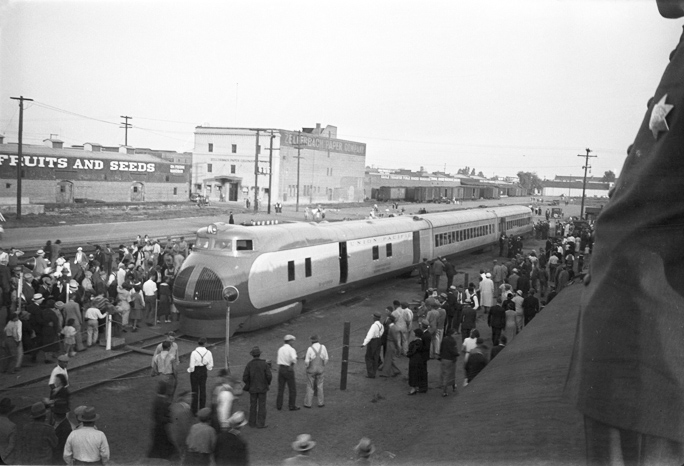 The Union Pacific M-10000 streamliner in Fresno, California. My father took the photo from the top of a railcar on an adjacent track. Notice the police badge on the man at the right edge of the photo.

That engine was built by a General Motors subsidiary called Winton Engine, and it developed a surprisingly small 600 horsepower. The train had only three cars, including the engine, and it was taken on a national tour in 1934 to show the nation that there was an exciting future to rail travel. UP wanted people to believe that the Depression was over and that rail travel in speedy streamliners was the Next Big Thing.

On the day of these photos, my dad was in Fresno, and he photographed the train and the audience it brought to the Fresno train yard. The three frames were taken from the top of a box car on an adjacent track. In one, there is clearly visible the badge of a policeman standing next to my father. Obviously that policeman did nothing to stop my father from taking these photos.

The photos are reasonably sharp, a little grainy, and they show the train and the crowd in great detail. 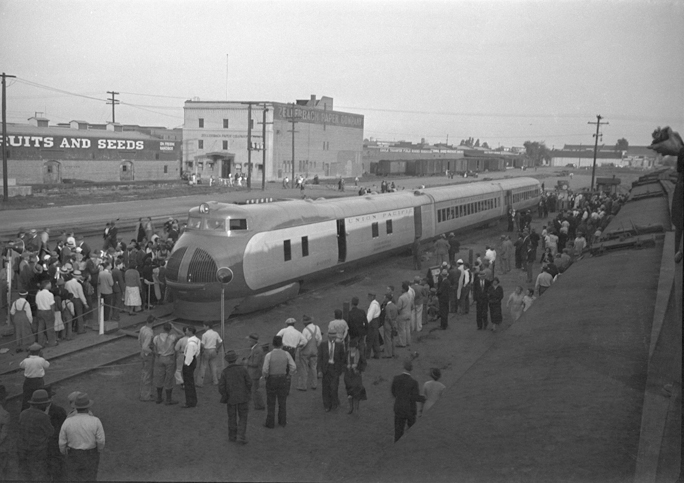 A second frame shows the same scene, but a little more of the foreground – showing the roofs of the railroad cars on which my father stood to take the photos.

Over the course of a year, Union Pacific Railroad took this train to cities all over America, and (according to Wikipedia) about one million people took the opportunity to go down to their local train station and see the dazzling new streamliner.

Eventually the train was put into regular service between Salina and Kansas City. It was renamed the City of Salina, and it was used until 1942 when it was scrapped for its aluminum to provide that metal to the building of aircraft for World War II.

The reason my dad was in Fresno? He was living in San Francisco at the time, and there is no record of his travels. His job at the time was as an insurance agent for Pacific National Insurance Company, based in San Francisco. There are many photos in the family archive of burned buildings, ships run-aground, and other disaster and near-disaster subjects. It could have been that the company had sent him to Fresno to investigate an insurance claim. We will never know.

The photos of this unique train are very interesting, and they tell a story of the beginning of the streamliner era (which didn’t really happen until the early 1950s). Union Pacific was way ahead of its time, and there was a war on the horizon. That war delayed the introduction of the diesel-powered train, and eventually the end of the steam era. By the time I was in junior high school in the early 1960s, the transfer of rail power was complete, and all of the steam locomotives had been pushed onto the sidings of America’s rail system.