I have created a photo too large for Photoshop

For those who have been following my work to make ultra-high-resolution panoramic photos with the GigaPan robotic camera mount, I have finally triumphed! I made a panoramic image this last Saturday with 1515 contributing images. The resulting image is 384,728 x 40,736 pixels in size, which is really large, and would be 4.701683 x 10 to the tenth power.

It took about two hours to shoot, another two hours to transfer the images from the camera to the computer, and about eight hours to stitch in GigaPan Stitch, the software that is used to make images that are produced on the GigaPan device. 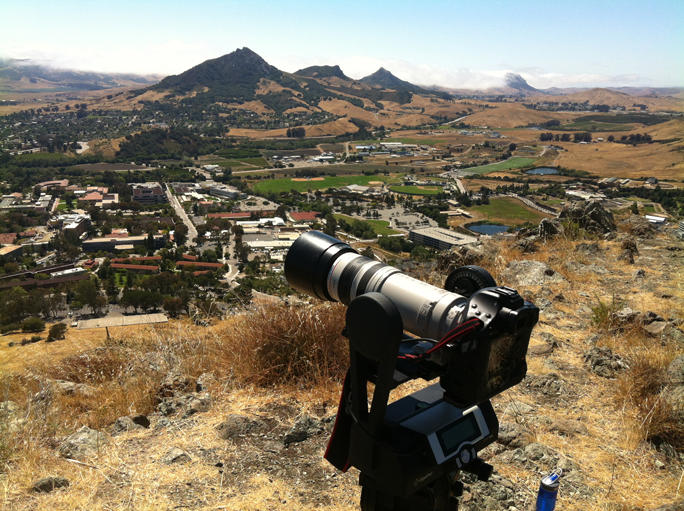 My vantage point above Cal Poly in San Luis Obispo. I put my horrible tripod on an old backpack frame and made the hike up to the top of the Poly P hill, about 1100 feet altitude. From there I made the epic photo on the GigaPan Epic Pro device with 1,515 contributing photos – each 60.2 MB in size.

I had it cooking all day Sunday, and by Sunday evening had completed the final image. My usual work flow for GigaPans is to upload them to the GigaPan site for public viewing, then export them to a format that can be opened by Photoshop. My plan, eventually, is to make one or more huge – really huge – full resolution prints from these large images, and use them to wallpaper a room with images.

This is a panoramic image I made with four shots on my iPhone. It stitched to over 50 MB, but it doesn’t stand up very well to my 47 GB GigaPan image! The one I can’t open.

When this one was finished stitching, and finished uploading to the GigaPan web site I tried to open it in Photoshop, but I received a warning that it’s too big for the popular photo software! 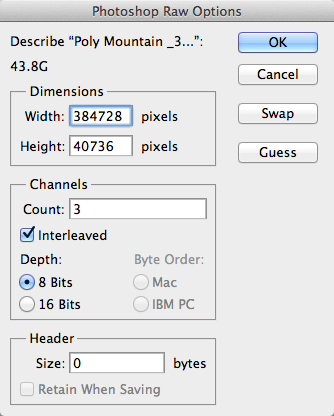 I entered the pixel dimensions and the number of channels into Photoshop’s Raw palette (the other one), and then I received this message from the program:

Oops! I couldn’t go any further because Adobe Photoshop has a 300,000-pixel limit!

My largest image prior to this was a photo taken in May from Cerro San Luis Obispo, overlooking the city, which spans about 200 degrees, and would print to 67 feet long at 300 ppi. At that size and resolution, the photo should provide eye-level image quality adequate to recognize individual automobiles and street signs. It’s available for viewing at GigaPan.com. I plan to print it eventually at full size.

My plan is to print these images on my Epson 9600 wide-format printer. I will print them in strips 44 inches wide and as long as necessary to fill the wall for my exhibition, which is not yet in possession of a venue. I can probably print the photo mentioned above in two long pieces, then I will pay a professional wallpaper hanger to put them up. I will be sure to stock a huge amount of paper and ink before starting, and will hold my breath while they print. I have never printed anything that large in the many years that I have owned an Epson wide-format machine, but there is a first time for everything!

I wish I could bill it to myself, but I probably won’t ever get paid for the work!

After posting my 300,000-pixel challenge on the GigaPan forum I have learned that there is no work-around for this (Corel Paint can open it, but I don’t have that software). It has been suggested that I re-work the photo to make it in two pieces, and then reassemble it when it’s printed.

I think I will start half of the image processing this evening, and do the other half tomorrow night. That way I will have two pieces that can be edited in Photoshop, perhaps scaled to 150,000 pixels each, and then assembled as an image with (only) 300,000 pixels of horizontal resolution.

That should do the trick.

Brian Lawler is an Emeritus Professor of Graphic Communication at California Polytechnic State University, San Luis Obispo and currently Guest Professor at Hochschule München. He writes about graphic arts processes and technologies for various industry publications, and on his blog, The Blognosticator.
View all posts by Brian Lawler →
This entry was posted in Photography, Photoshop techniques, Software. Bookmark the permalink.