I upgraded to Creative Suite 5.5 in the fall, and was disappointed in Adobe for charging for a full upgrade when they hadn’t really upgraded any of the applications except InDesign. I needed to make the upgrade in order to keep pace with the software at the university, which had upgraded in fall also.

This last week I used the InDesign to create an ePub, something Adobe crows about being so easy and complete, and other superlatives that make it sound like a picnic.

They added a new palette to InDesign, called the Articles palette, which defines the order of export for articles in InDesign documents. While it controls the order, it does nothing else. What I would like to see it do is to be the source of control for a functional Table of Contents, in addition to being the source of export order for the “articles” in the book. 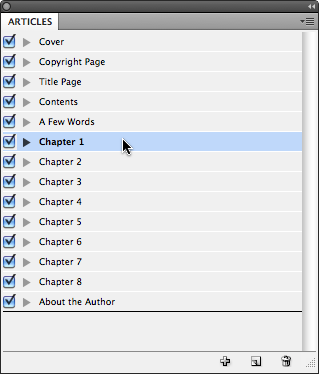 The new Articles palette in InDesign controls the order in which chapters “articles” are exported to ePubs. This is a good start, but it needs to have greater functionality.

Adobe also added the ability to map Paragraph Styles to tags in ePubs, allowing those tags to be interpreted later on a Kindle to set the style of the display. This is useful, and I appreciate it.

There are two ways to make an ePub from InDesign, the first is to build a single document in InDesign, applying Paragraph Styles to the text, and then exporting the finished publication to ePub. As you export the document, you indicate which of your Paragraph Styles should cause chapter breaks in the resulting ePub.

Before you export, you have to add the Author’s name to the document’s IPTC data (File>File Info), otherwise InDesign will create an ePub with Unknown as the author. This, despite the fact that they allow you enter the Publisher’s name and the ISBN in the Export window. I wish they would allow the Author’s name to be entered at the same location.

The second path to an ePub is to create a book as a series of single-chapter InDesign documents, each named for the chapter they represent. Then you import these separate chapters into an InDesign Book (File>New>Book), synchronize them so that InDesign indexes the page numbers correctly, and then Export to ePub. 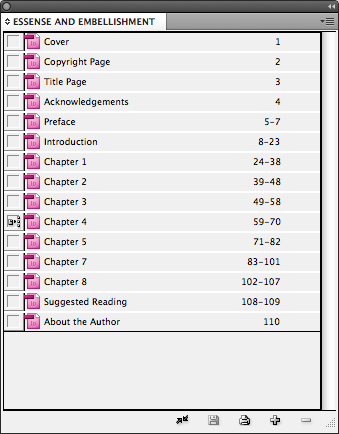 This is the Book palette in InDesign. It’s a curious entity, not quite a part of InDesign, not altogether separate. You can drag chapters into the correct order, and their titles define the entries in a functional Table of Contents in your eBook. I like this technique best.

A word of caution here: the regular File>Export menu item does not work when you have an InDesign Book open. Instead, you have to use the microscopically small (some might say “hidden”) reveal in the upper-right of the Book palette to use the other Export to ePub menu, which brings up the very same palette of controls for making ePubs (Why couldn’t they make both of them work?). 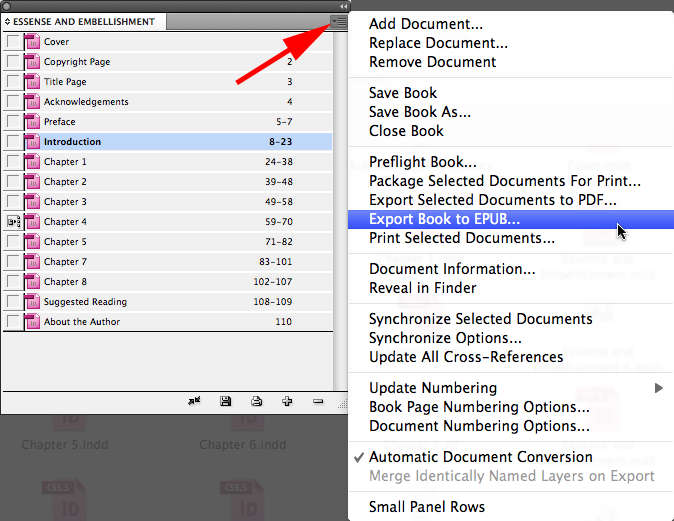 The Book palette has its own reveal (indicated by that Big Red Arrow up there) that opens an entire menu of choices, one of which is the Export Book to EPUB. This is the only way to get this to work; the Export menu in InDesign is disabled when a Book is open.

When you make an ePub by this second method, InDesign creates a functional Table of Contents that is a table of the chapter titles of the contributing documents. Of the two techniques, I prefer this one because I can easily control the exact names of the Chapters, and I can drag these chapters into the exact order in which I want them to appear in the finished book.

Curiously, there is no way to use the new Articles palette when you work with separate chapter documents in an InDesign Book.

And InDesign’s ePub export doesn’t work correctly every time. In the book I made this week, the program created two pages, called Title Page, and Title Page-1. As hard as I tried, I could not find the source of the second of these pages. There is only one document in my book entitled Title Page. The program didn’t create any other duplicate chapters. I edited the redundant chapter out using a program called Springy.

Which brings me to the second this-is-no-picnic characteristic of InDesign as a creator of ePubs. In every case in my experience, the finished ePub must be edited in third-party software to correct little faux pas like the double Title Page, mentioned above, and to make the book compliant with the ePub standards.

My experience with ePubs is limited to just three years of making them, so I don’t count myself an expert. But, I do count myself as an InDesign expert in every other respect, and I am disappointed that this otherwise excellent page layout application is not as easy to use as advertised for making ePubs. Too much of it is opaque, badly- or not-documented, and overly geeky.

I paid a small fortune to upgrade to a program that purports to be easier and better for making ePubs, but in fact it’s a convoluted process that I don’t enjoy using, and which doesn’t produce effective ePubs consistently. It’s too hard to manage, and it requires too much editing after-the-fact to make a commercially-complete ePub.

I will continue to use it, and will learn from the experience how to produce ePubs that are effective and commercially acceptable. But it shouldn’t be this difficult. I expect better from Adobe.

Brian Lawler is an Emeritus Professor of Graphic Communication at California Polytechnic State University, San Luis Obispo and currently Guest Professor at Hochschule München. He writes about graphic arts processes and technologies for various industry publications, and on his blog, The Blognosticator.
View all posts by Brian Lawler →
This entry was posted in ePubs and eBooks, Imposition and Pagination and tagged ePubs and eBooks. Bookmark the permalink.