I’ve been back from the Bosque del Apache and the Very Large Array for ten days now, and (other than the temperature) I miss it. The Bosque is a magical place, with photo opportunities galore. Bird watchers take flight in this place, and it is nothing short of amazing. You can point your lens in nearly any direction and get a reasonable photo. Frame an image carefully and you get an avian masterpiece. 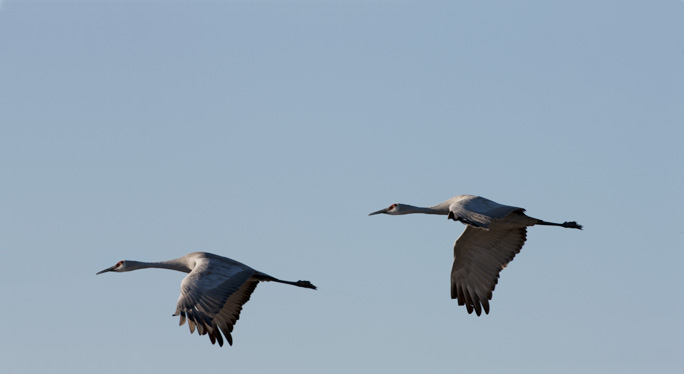 I took a total of 1326 photos at the Bosque, many of which are lovely, usable, reproducible. I just don’t know what to do with them! I will post a few more of them here.

Sand Hill Cranes in flight at the Bosque. There were thousands of them during our visit. This image, and the one above, were taken with the Canon 600mm f4.0 lens on a fluid head tripod.

At the Very Large Array I took only 400 photos, some of which are panoramic component images designed to be stitched together into a panoramic photo. I use my home-made panoramic mount, and I shoot 12 frames with the camera mounted vertically to get these. My usual technique is to shoot at about 21mm so that the aspect ratio of the final photo is about 5.5:1. The panoramic image of the array (shown here) is much taller, a result of shooting at 17mm. I did this to include the entire antenna that was directly in front of me. These antennas are massive: 94 feet tall, 82 feet in diameter, and about 235 tons each.

Antennas at the Very Large Array in New Mexico. This panoramic photo was taken on the walking tour path at the facility, which was spotted by frost on the day of our visit. It is a full 360 degree image. It was taken with my Canon 1ds Mark III camera with a 17-40mm lens set to 17mm.

With this focal length I get an aspect ratio of 3.07:1 which would normally create a panorama that only a fish can appreciate. But I like this one, and it has my shadow (and my son’s shadow) in it, which puts our shadow of approval on the image.

This panoramic image, which covers only about 200 degrees, was taken with my 100-400 zoom lens at 100mm. I stitched it with Photoshop’s Photomerge tool. The aspect ratio of this panoramic image is 8.23:1, which is too wide for my taste; it makes displaying the photo difficult – it’s too long and not tall enough. Click on the photo to see a higher-resolution version of the image.

While visiting the VLA, I also took a telephoto panorama (shown above), this one using my mount, but hand-stepping the image visually. I put it together in Photoshop using the Photomerge function while on the plane from Albuquerque to Los Angeles. It stitched nicely, and I spent only about an hour doing microscopic retouching, tonal adjustment and small corrections to get it perfected.

Photomerge is a nice tool in Photoshop, but I have found that it fails when stitching panoramic photos taken with wide-angle lenses. Almost all of mine are wide-angle, so instead of using (and being disappointed by) Photoshop, I use PTGUI Pro software, which I believe is the best in the business.

PTGUI can stitch almost anything, adjusting exposure, blending and cajoling sometimes inaccurate panoramic components into beautiful finished images. Over the years, PTGUI has been rewritten, updated and improved to the point where it’s nearly foolproof. It’s smart enough to recognize multiple processors, using as many as are available, and it allows human intervention when needed to connect the panoramic dots when adjacent photos don’t work correctly.

Ten days on, I am still organizing, scoring, editing and retouching my photos from the Bosque, and from the VLA. I’m thinking about having a photo exhibition. Maybe in Paris! 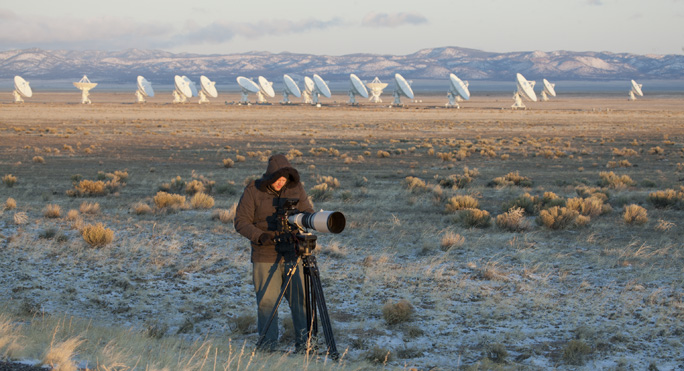 A note on Patrick’s videos: they are still in progress. He’s been busy doing commercial cinematography, and hasn’t finished the bird videos yet. I will post a link here when he is finished. This is Patrick at the VLA with his Red Epic camera on the big Canon lens in the frosty morning.

Added July 6, 2012: The birds video is now finished, and it can be seen on Patrick’s Vimeo page.

Brian Lawler is an Emeritus Professor of Graphic Communication at California Polytechnic State University, San Luis Obispo and currently Guest Professor at Hochschule München. He writes about graphic arts processes and technologies for various industry publications, and on his blog, The Blognosticator.
View all posts by Brian Lawler →
This entry was posted in Digital video, Panoramic Photography, Photography. Bookmark the permalink.