I just returned from a 2,018-mile journey up the coast of California, into Oregon, then back by a slightly different route.

Along the way I visited and camped in National Parks, State Parks, National Forests, and private campgrounds. Along the way I stopped to visit beaches and lighthouses. I hiked through redwood groves and wondered at wonders all along the route.

And I practiced typographic criticism all along the route. On nearly every roadside information sign I grimaced as I found typographical errors, stylistic inconsistencies and major typographical gaffes.

Bronze busts with errors, the most costly of the genre make me want to scream: “Doesn’t anyone proofread these things before they are cast?!”

An example: at AT&T Park, home of the San Francisco Giants, all of the quotes painted (printed?) on the walls are made with incorrect quotation marks and apostrophes. And, to make them even worse, all of the quotation marks are followed by a space (don’t do that!) at the beginning, and preceded by a space (don’t do that either!) at the end. Willy Mays is my lifelong hero; why insult his quotations with bad typography? (Mays is still alive.)

At the Umpqua River, I visited the lighthouse, now operated by the county of Douglas, which keeps it running for navigators at sea. It is a beautiful historic lighthouse featuring a working Fresnel first-order rotating light, apparently the only one of its kind still in operation in the world.

In the museum next door are delightful exhibits that describe the lighthouse and its storied past. It’s quite a place. 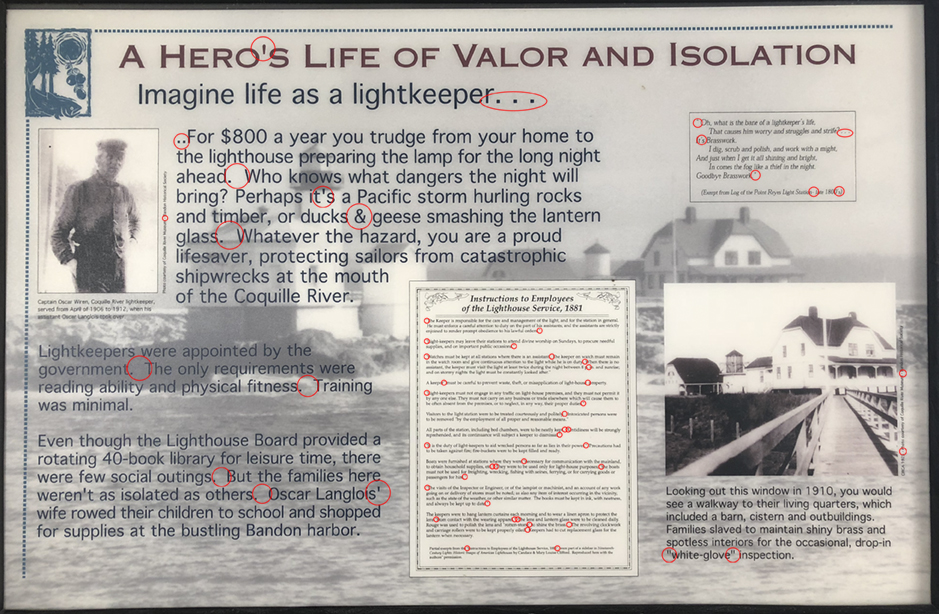 I have circled the typographical errors on this informational sign. I could almost not read it for the stumbling blocks of misused marks, etc. Remember my motto: Don’t interrupt the reader!

On a sign in that museum I found 56 typographical errors (I consider incorrect spacing, incorrect apostrophes, incorrect dashes, incorrect quotation marks, to be errors. That’s the point of these essays). Fifty-six!

It starts in the headline, and continues to the bottom, every single apostrophe and quotation mark is wrong. There are ellipses with two dots (don’t do this!), ellipses with dot-space-dot-space-dot (nor this!). There are spaces before closed-quotes, and spaces after open-quotes. None of these is correct.

There are hyphens used where there should be a long dash (I don’t care which one).

There is an ampersand used in prose where the word “and” should be used.

It goes on and on and on, and it made me quiver with the Typographic Tremors. Someone was paid – a lot of money – to make this sign and erect it on the site.

Why not do it right? Why not consult with a typographer who can point these errors out before they go to printing, mounting and erection?

I am willing to do this for any organization – be it a National Park (they have a staff typographer at Harper’s Ferry) or a local landmarks commission. I stand ready to critique and mark-up any historic marker signs and placards. Send me a PDF! I’ll do it with a smile. No charge!

And, then the viewers of the signs can appreciate their beauty and information without getting the Typographic Tremors.

Brian Lawler is an Emeritus Professor of Graphic Communication at California Polytechnic State University, San Luis Obispo and was a Guest Professor at Hochschule München from September, 2021 to September, 2022. He writes about graphic arts processes and technologies for various industry publications, and on his blog, The Blognosticator.
View all posts by Brian Lawler →
This entry was posted in Language and grammar, Mistakes you can avoid, Typography and tagged avoiding typographical errors, Brian Lawler, excellence in typography, expensive mistakes, historic markers, The Blognosticator, typographic discipline. Bookmark the permalink.

4 Responses to Getting the Typographic Tremors
reading historic roadside signs