Another nod to early three-color photography

When Sergeii Prokudin-Gorskii traveled around Russia in the early years of the 20th century, he carried a three-color camera, one which exposed three images onto a monochrome negative plate in rapid succession. The result was color separations on film. 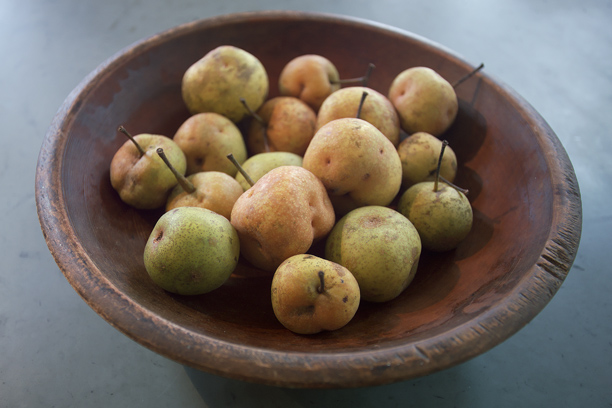 My three-color still-life of pears on the kitchen counter at my friend’s house in upstate New York. This was taken with three separate exposures made through red, green, an blue filters.

This technique is still used in the motion picture industry when archiving (actual) film from motion picture cameras. Because color emulsions fade over time, and the lifetime stability of color film cannot be assured, the master negatives are separated with red, green, and blue filters onto individual rolls of black and white film, each representing the color of the original in a non-fading emulsion. When the movie-makers of the future want to resurrect the color “original” they then print the negatives, one after the other, onto fresh color film through the red, green and blue filters, and they will have a faithful color film again.

This, curiously, presumes the availability of film printers — and film — in the future, so the whole thing may be a crazy idea.

It’s better, I believe, to scan every frame of the master motion picture, then store the digital files, and resurrect with a digital device rather than onto film. Which presumes the existence of digital devices capable of reading the files in the future, but that’s another problem.

Yet… red-green-blue photography is still an interesting way to take photos. I have done it on numerous occasions with great success. For this I use Wratten gelatine filters from a color separation camera (ca. 1975) and expose an image on my Canon digital camera with the filters held in front of the lens. I make three successive shots, and then assemble the images in Adobe Photoshop.

In my most recent effort to capture “pure” color with my (ironically color) digital camera, I set the camera to monochrome, which is only truly monochrome when set to JPG, and then captured a lovely bowl of pears on the counter of my friend Gary Stine’s upstate New York kitchen. The exposures were made on a relatively neutral countertop made of slate.

The resulting images are nice, and the composited RGB color image is excellent. I had to make only a tiny color cast adjustment of magenta to correct the neutrals once I was finished with the image.

1. Open each of the separate color images at a resolution that is appropriate to your output needs.

2. Copy the Red channel into the clipboard

3. Choose File>New and make an RGB image with the dimensions suggested by Photoshop (It gets the resolution from the item in the clipboard).

4. Go to the Channels menu, and clock on the word “Red” then paste.

5-7. Repeat the process with the Blue and Green channels.

8. When complete, view your image in RGB, and color-correct if necessary.

Brian Lawler is an Emeritus Professor of Graphic Communication at California Polytechnic State University, San Luis Obispo and currently Guest Professor at Hochschule München. He writes about graphic arts processes and technologies for various industry publications, and on his blog, The Blognosticator.
View all posts by Brian Lawler →
This entry was posted in Photography. Bookmark the permalink.