Getting to say I told you so

(without a nagging tone of voice)

It is rare that a parent can enjoy the sheer thrill, the ecstasy of being able to revel in saying “I TOLD you so.” Heck, the more I think of it, it’s rare that anyone can say it.

For years I have been lecturing on the future of digital printing. I have taught hundreds of students in Graphic Communication about the electrophotographic printing process, about the various devices that image with powdered plastic and electrostatic energy. It’s delightful stuff, but I think that toner has met its match with ink-jet.

And I have felt this way for years. Ink-jet printing machines of various types have swept into the screen printing arena, taking the lion’s share of the sign market, creating new industries for point-of-purchase, three-dimensional display, and interior décor fields. This is the Xanté Excelagraphics printer featuring Memjet ink-jet technology. It’s fun to watch it print, because it seems so unlikely that it can print as fast as it does.

For wide-format, photographic, and display signage (wide-format is defined as printing up to 48 inches in width), ink-jet is essentially the only way to go. Only very-large-format offset presses can compete, and there are very few of those around. When they do compete, it must be on long runs, so ink-jet wins most of the time.

For office printing, workgroup printing, and general business printing, toner leads by far, with ink-jet being the realm of college students in dorm rooms with hundred-dollar ink-jet printers and expensive ink habits. Toner is expensive also (we just don’t hear about it as much).

For about a decade I have been aware of the work being done by Memjet, and their corporate sponsor, Silverbrook Research. There have been a lot of articles and industry rumors about the company. About six years ago I was briefed by a Memjet executive about their MEMS fabrication efforts and the idea of a massive ink-jet head.

The videos started showing up on the Memjet web site a few years ago showing labels literally shooting out of a high-speed printer in full color. The others showed a (poor, lonely) toner printer warming up while the Memjet prototype printer fired-out finished pages at less than a second each.

The one that got my attention was the wide format printer prototype printing a huge panoramic photo at a speed that humbles those of us with conventional boustrophedontic (I can go years without being able to use that word) ink-jet printers.

So, we as an industry have been salivating for years over the coming-very-soon Memjet printers, and it’s delightful to see two of them here at GraphExpo this year. Len Lauer, President and CEO of Memjet, announces the Excelagraphics-Memjet collaboaration at a press conference on Monday, September 12. Behind him is Frank Romano, who introduced the product, and used the phrase “disruptive technology” to describe the machine. I usually blanch at the use of that phrase, but in this case I agree with him. Memjet technology (and similar devices) are in fact disrupting conventional printing systems, and will continue to do so in the near future.

One is the Neopost AS-950C digital color printer; the other is the vaunted wide-format Excelagraphix printer from Xanté which uses a set of Memjet heads to print a 42-inch path at either six or 12 inches PER SECOND.

I own an Epson 44-inch wide-format printer. I use it for fine art printing, commercial posters and graphics, and for photographic printing. When it prints at the resolutions I love (1440 and 2880 ppi) it takes a long, long time to make a print. But, I love it.

Imagine a printer of similar (I intentionally didn’t use the word “equal”) quality printing many times faster, and then imagine the impact on the graphic arts industry. Imagine a printer that can produce a 96-inch long poster, 42 inches wide in eight or 16 seconds.

One no longer has to imagine that. It will soon be available from Xanté (spring, 2012 we are told) with this new machine. 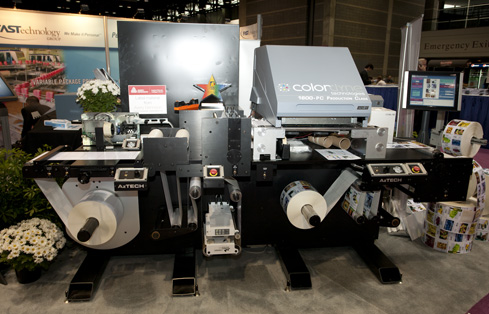 This is the ColorDyne press, a label printing machine that uses Memjet ink-jet heads. One other Memjet product was visible at the show, an envelope printer.

And, Memjet executives whispered in my ear on Monday evening that they are working with two other wide-format printer manufacturers to bring other versions of their high-density print head to market.

Brian Lawler is an Emeritus Professor of Graphic Communication at California Polytechnic State University, San Luis Obispo and currently Guest Professor at Hochschule München. He writes about graphic arts processes and technologies for various industry publications, and on his blog, The Blognosticator.
View all posts by Brian Lawler →
This entry was posted in New technology. Bookmark the permalink.