Sleeping in the shadow of the Lakeside Press

First of my reports from GraphExpo 2011:

I awoke this morning in the Hyatt McCormick hotel in Chicago, adjacent to the McCormick Place, a convention center that is the legacy of the former Editor and Publisher of the Chicago Tribune, Robert Rutherford McCormick (1880–1955), whose tireless work for decades turned Chicago into a great place to have a convention. 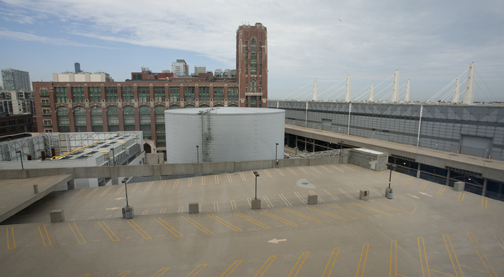 This is the view from my hotel window, a surprisingly historic structure in the background.

Outside my window is a large parking lot without a single car in it, and beyond that a huge (and really ugly) water tank. Beyond that the now-abandoned R.R. Donnelley & Sons Building.

Abandoned may not be the right adjective. It’s not being used for printing anymore, Donnelley having moved their headquarters into the Loop, and their printing plants scattered to the four winds. It’s not clear from the outside if the building has anyone or anything still inside. 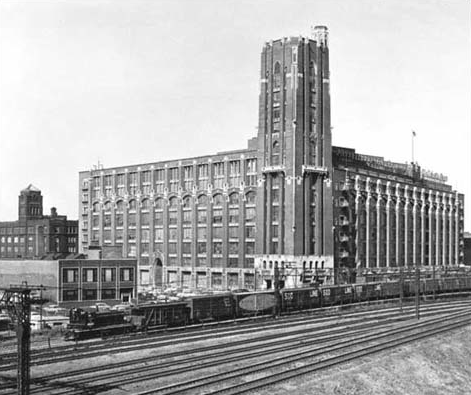 The R.R. Donnelley Building was built originally in 1928, and the tower added in 1949, judging from the inscriptions on the building, and a small amount of research I have done online. This photo dates from 1955. The McCormick Place convention center now sits astride these railroad tracks.

The first time I saw the Donnelley building was 1973, when I visited the Donnelley plant headquarters as a student of Graphic Communication. At the time the building housed floors and floors of (mostly) men, working on the Sears Catalog. I remember seeing first-hand these skilled craftsmen “stripping” the emulsion off of black and white photos, and floating it onto another carrier film to make composite images for pages of the famous catalog. It was on that day that I finally understood why the process of assembling film for printing is called “stripping.”

Complete film pages, comprised of a number of photos floated together onto a single carrier film, were later converted into halftones, or built into composite forms that were used to make rotogravure cylinders. We didn’t have any of the modern conveniences like digital photography and Adobe Photoshop. Everything then was done by hand, and some of the work required a degree of skill that has not been seen in decades.

The thing I remember most about my tour of the Donnelley building was the entrance to the Donnelley Board Room. There were columns of stone cut with precise letters by the Catholic priest and calligrapher, Edward M. Catich (1906-1979). The lettering was based on rubbings of the Trajan Column in Rome, which Fr. Catich studied while he lived and worked at Pontifical Gregorian University there.

All around the Donnelley Building are these printer’s crests, made in ceramic and glazed with colors. It’s an impressive monument to the printing industry.

I had, at the age of 23, never seen anything quite so beautiful. I had studied and taught calligraphy as a young lad, and this was like going to the source (even if it was a replica) of the Trajan Column letters. Here, before my eyes, was the original Roman alphabet as cut by the famous friar. I was awe-struck, and said as much to my host (though I remember he was not as moved as I was).

The original R.R. Donnelley “logo” featured an American Indian in silhouette. Over the years, it was modernized several times, and today is simply lettering (nice lettering) with the R R Donnelley name only (no periods after the Rs).

When Donnelley opened their new, glassy downtown-Chicago building in later years, I hope they took the carved columns with them. It would be a shame for no one to see the beautiful workmanship.

And today as I type this, the old red brick building is about 40 yards from my desk. It now sits adjacent to the aforementioned water tank (cooling for McCormick?), and it looks lonely.

Adorning the exterior of the grand old building are the crests of famous printers and typographers. This heraldry is done in bas relief, beautifully crafted and glazed in permanent colors. It’s a grand testament to another era of printing.

It’s also a fitting place for Chicago to have put the McCormick Place convention center. Here every year tens of thousands of printers converge on this hallowed location to look at the new, the colorful, the digital.

I wonder if they know anything about the building just outside the hall?

Brian Lawler is an Emeritus Professor of Graphic Communication at California Polytechnic State University, San Luis Obispo and currently Guest Professor at Hochschule München. He writes about graphic arts processes and technologies for various industry publications, and on his blog, The Blognosticator.
View all posts by Brian Lawler →
This entry was posted in History. Bookmark the permalink.

6 Responses to Sleeping in the shadow of the Lakeside Press