These two caught my eye

At last week’s PRINT13 convention I saw a lot of machines. Most of these machines were incremental improvements on machines I have seen before, and some were not of interest to me because I have limited my bandwidth recently to look only at technologies that affect me. Regardless of my narrow-bandwidth tour of the show, I took note of some exciting new devices on display.

A few years back EFI showed the nascent Jetrion press, a UV-cured ink-jet press that prints labels on pressure-sensitive material. This year they showed the latest of the Jetrion models, one fitted with laser beams that can cut half-way through the printing stock to “die-cut” labels on the fly. I found this very interesting.

This is the business-end of the Komori/INX/Spartanics UV ink-jet label press. On the left is the white ink and its associated ink-jets, followed by a separate UV curing bar. Next come another color, followed by a curing bar, and then three inks and another curing bar, and last, a sixth ink-jet head. Just to the right of the ink-jet area is the laser-cutting area, enclosed in glass, which keeps the smoke inside, directing it to a ventilation system overhead.

On the other side of the building was a press made by INX (an ink manufacturer) and Spartanics (an engineering firm). This press, called the NW140 UV, will be marketed exclusively in the U.S. by press maker Komori.

The Spartanics press is about half the price of the EFI offering, and narrower (this makes a big difference in productivity).

These labels were printed on aluminized paper, then “die-cut” on the Komori/INX machine, the cutting being done by lasers. The moderately complex die lines seemed not to slow the process at all.

At seven inches in web width, and with a production speed of 80 feet-per-minute, the NW140 press produces very nice looking products with printing, die-cutting and weeding (removal of the non-image material) on the fly. The press prints with white (optional), cyan, magenta, yellow, black, and one additional color. Resolution is a rather low 600 ppi, but in the samples I saw, this mattered little (they chose good samples). One of their samples, a wine label, was of very poor quality. This was likely the result of someone converting the original into a really bad JPEG image with lots of digital artifacts. With that exception, the labels being produced were of unquestionable commercial value. 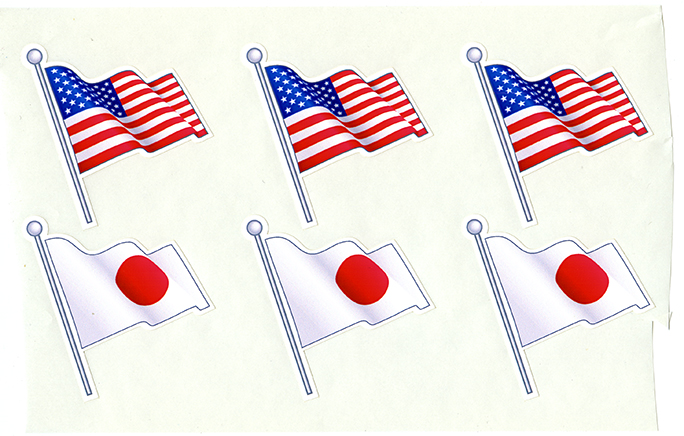 These flag stickers were being printed and cut on the machine during the show. A simple design with a simple die-line made the process very quick.

It’s done with smoke and mirrors
What makes these machines so interesting is that the “die-cutting” is done without dies. The method used by both companies is to use CO2 lasers, guided by mirrors, to burn through the printed substrate – and not the base – as the material rolls through the press. The laser beams cut and spark, and create a lot of smoke, which is evacuated from the machine by a large vent pipe going out the top. 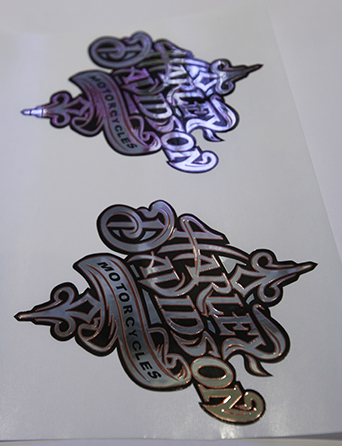 These Harley-Davidson labels were the most complex samples produced by the INX team. The machine produced these without difficulty, and the quality is admirable.

Variable-data die-cutting?
With this, I assume, it’s possible to make variable-data dies, which is to say that each and every label can have its own die line, and those die-lines can change on the fly as the machine runs. Though neither company was demonstrating true individualized die-cutting, they were printing variable-version cutting, making short runs of one design, followed by short runs of another design.

The cost of making and mounting rotary dies on a flexo press is significant. Though recent developments in magnetic dies have changed that for the better, it’s still the business of a die-maker with complex milling machines to make the cutting part of an inline die for label printing. Costs are also significant, with figures in the hundreds of dollars per die being normal.

With either of the machines mentioned above, it’s now possible to make complex die-cut labels without spending any money on dies.

Another solution to this is the one provided by ESKO – the iCut – which is a post-press offline digital “die-cutter.” It’s a machine that moves a surgical blade around on a printed sheet to cut, or partially cut the surface of a preprinted piece. Though the iCut is a nifty machine, it doesn’t compete with the laser-cutting on the Jetrion or the Komori NW140 press. Consider handling alone, and the machine that prints and cuts simultaneously wins the argument.

The Komori press is about the same price as an HP Indigo 4000-series digital press, but at only half the web width. Again, though, it is the ability to make finished labels on the machine that distinguishes these devices.

If I needed 300 die-cut labels printed on an aluminum-surface pressure-sensitive material, the INX/Komori machine could complete that job in minutes. It would be hard for an Indigo or conventional flexo press to do a similar job in a similar amount of time.

Brian Lawler is an Emeritus Professor of Graphic Communication at California Polytechnic State University, San Luis Obispo and currently Guest Professor at Hochschule München. He writes about graphic arts processes and technologies for various industry publications, and on his blog, The Blognosticator.
View all posts by Brian Lawler →
This entry was posted in New technology, Printing and Printing Processes, Technology and tagged die-cutting, INX, Jetrion, Komori, label printing, laser-cutting, Spartanics. Bookmark the permalink.