I have seen the future of newspaper printing

A few years ago I got a chance to see the Hewlett-Packard M400 press in prototype form, and I wrote glowingly about that press. It was the first time I had seen an ink-jet web press. It was, and is, impressive (if you’ll excuse the expression). The HP machines – now there are several of them – come in sizes up to 40 inches in web width, and they print at approximately 400 feet per minute. The weaknesses of these presses has always been that they only print roll-to-roll (HP says this is a feature), requiring conversion on an offline machine that takes the roll of printed material and cuts it into sheets, folds it, and delivers it as a finished product.

Other manufacturers of ink-jet web presses include Screen, Kodak, Ricoh, and several others. Xerox has a delightful competitor in its Ci-Press, which prints on a roll of paper with its crayon-printing technology (I really like that one).

This is the TKS JetLeader 1500, the first ink-jet newspaper press in the United States. This press is capable of printing, sectioning, cutting and folding finished newspapers in one operation. On the press last Monday we saw an edition of the Wall Street Journal printed. Directly in front of the camera is the section of the press where the ink-jet printing is done. Paper feed is from left-to-right.

The sleeper in this market is a medium-size Japanese company called TKS which makes offset newspaper presses, and which entered the market two years ago with the Jet Leader, an ink-jet press made in the style of an offset press. This is important because it’s the after-printing part of printing that makes the difference between just printing and actually delivering a finished product. The JetLeader 1500 is a publications press in every sense of the word. It prints, folds, cuts, sections, folds again, and delivers finished, sectioned newspapers (or other publications) in one operation – paper goes in one end; finished newspapers come out the other end.

No one else does that (KBA has a similar machine called the RotaJet that they developed with R.R. Donnelley. As far as I know there are none of these yet in this country).

I’ve seen several machines at DRUPA where an ink-jet press is set up inline with a separate sheeter/cutter/folder, and though these have the potential of working well, in the demonstrations they don’t work at all – or they seem to be poorly matched. In several cases the sheeter/cutter/folder is of the class of machines that would be found in mailrooms, or in-plant printing of lightweight materials. Anyone who has ever run a news press (and I have run a news press) knows that the folder must be an industrial scale device to work in this environment. 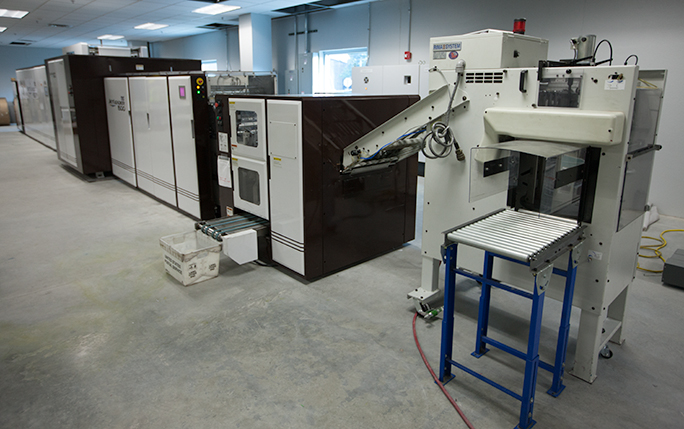 This is the delivery end of the JetLeader press. In the center of the photo is the delivery conveyor; on the right is an optional bundler which will stack finished newspapers then strap them for distribution. This press will soon have an automated conveyor system added to move finished papers off the press to a distribution area in the adjacent room.

Cutting through 72 pages of newsprint is the work of a very sturdy machine. On offset printing presses this task is done by a guillotine blade embedded in the middle of a turning cylinder. That blade comes out each revolution (called the press cut-off) and punches through the whole newspaper at once. The blade exerts tons of pressure on the paper as it cuts through the newsprint. These blades are typically serrated (you can see this at the edge of your daily newspaper).

Last Monday morning I took a painfully long cab ride (morning traffic) to visit the new plant of the Newsweb Corporation on the northern edge of Chicago. This is a company that prints newspapers. They don’t publish any newspapers, they just print them – about 100 of them. They print the Spanish language weekly, the Polish language weekly, and a whole bunch of newspapers in between.

Newsweb is the first company in the U.S. to install a TKS Jet Leader press. It has been in their older plant for just about one year, and it has performed admirably. They moved it during the last couple of weeks to the new facility, and were demonstrating it for the first time this week.

When I first met the company’s president, Rodd Winscott, last year he had had the machine for only a week, but he was thrilled with the capabilities of the machine. His company also has two Goss Community web offset presses, so he has a lot of experience printing newspapers. He explained to me in our first conversation that he measures waste in hundreds of thousands of pounds annually, as all printing companies do. Make-ready accounts for most of this waste, and it is part and parcel of the process to divert the output of a news press into the dumpster.

On the new TKS Jet Leader, he told me they had just completed the first week of commercial production, and had run a variety of newspapers. Total waste: one newspaper.

Having an ink-jet newspaper press gives Newsweb Corporation the ability to print short-run newspapers. The press has essentially no make-ready, so papers can be run in small quantities, then another newspaper can be printed. Unless the web needs to be changed to make a different size paper, they can change from one title to the next without even a gap between the first and the second publication. This makes it possible for the company to sell to high schools and community colleges, to clubs and organizations, to anyone. Gone are the days when it took 1,000 newspapers of make-ready to print 1,000 newspapers that were salable.

I saw Mr. Winscott at PRINT on Wednesday this week and asked him how it was going. He told me that the firm has ordered a second Jet Leader to complement the first, and that his year of experience with the press has been excellent. The press makes possible an array of new opportunities for his company, and they are reaping the rewards of ink-jet printing for a wider audience.

The beautiful new three-story Goss Universal 75 press being erected in the plant at Newsweb Corporation in Chicago. The press is being readied for production in the next few weeks.

Also being assembled in the new Newsweb plant is a brand new Goss offset newspaper press – a Universal 75 with four printing towers and two collecting and binding stations. This is the first completely new newspaper press I have seen in years, and it is further testament to the success of Newsweb Corporation. When their building is completed later this fall, they will move one of their two older Goss Community presses into the plant to pair with the new Goss machine. In the adjacent room will be the two TKS Jet Leader machines doing shorter run production of newspapers.

When I asked Mr. Winscott what he considers his minimum run on the TKS press, he said, “One hundred!” That’s a pretty amazing statement from a man with a newspaper press, but he knows that with the new ink-jet presses, his company can profitably produce runs this small.

With production capabilities like this, it’s hard to believe the oft-rumored line that print is dead.

It’s absolutely not, and I have proof!