For centuries printers have been locking-up type inside a frame called a chase, then putting the chase into a printing press to complete letterpress printing projects. The method for doing the lock-up was originally done with wooden wedges which were hammered between the type “form” and the steel (or cast iron) chase. In the 19th century a company called Challenge developed a double-wedge tool called a quoin that expands when you turn a toothed wrench between its two halves.

In the 20th century the same company developed what is known as the high-speed quoin. It’s a modern, steel expansion device that opens and closes about 1/8 inch with a wrench called a quoin key. The benefit of the modern quoins is that the pressure is even across the width of the quoin, and they are fast and easy to install and remove. 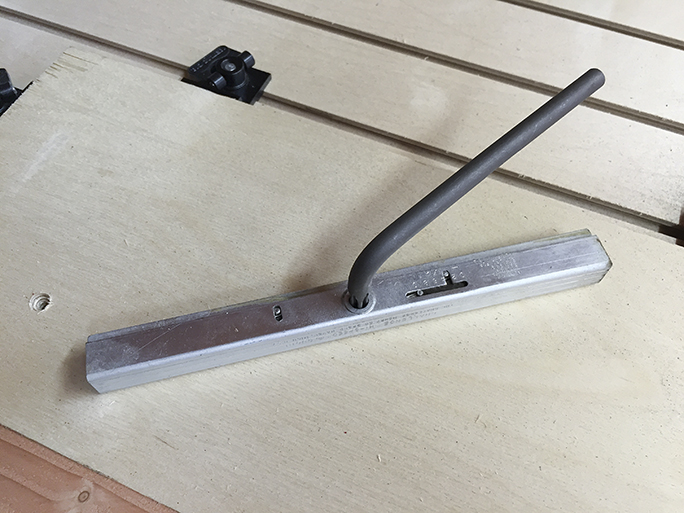 This is a high-speed quoin, originally manufactured by Challenge Machinery for the printing industry. The quoin key (wrench) is inserted into the gear on the top. Turning the key caused the quoin to expand or contract.

I happen to own a stack of them, remnants of a graphic arts company I used to own and operate. Mine are clean and in excellent shape, as the most recent use for them was to hold Linotype slugs in place on a Vandercook proofing press. They almost never got ink on them, and they have been in storage for many years, unused, lonely, and waiting for this afternoon.

A few weeks ago I machined a four-foot square board for my CNC router table with T-slots that run the length of the board. T-slots allow various clamps and bolts to be used to hold things down on a machine. On a CNC router, they can be used to hold the work piece (wood, typically) to the table while the router makes its rounds, cutting out and around the pattern I have loaded in software. 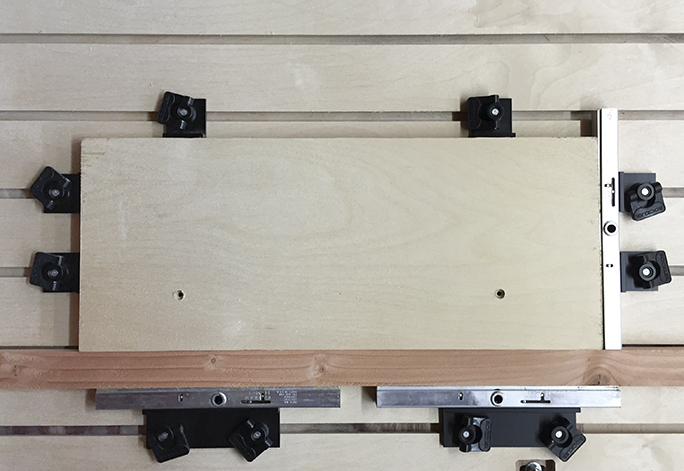 Here is my test board held in position by Rockler low-profile stops and three high-speed quoins. The pine board along the bottom is a spacer.

I also bought some low-profile stops from my favorite woodworking tools company – Rockler – to use on the table top. These stops have T-slot bolts built-in, and they slide nicely down the board I machined for the purpose.

The T-slot board sits on top of another board called the spoilboard, which is a piece of MDF designed to get cut (very slightly) by the router as it goes by. The T-slot board is held to the spoilboard with T-bolts, each one recessed into the board so that it is lower than the cutter where it might pass overhead. 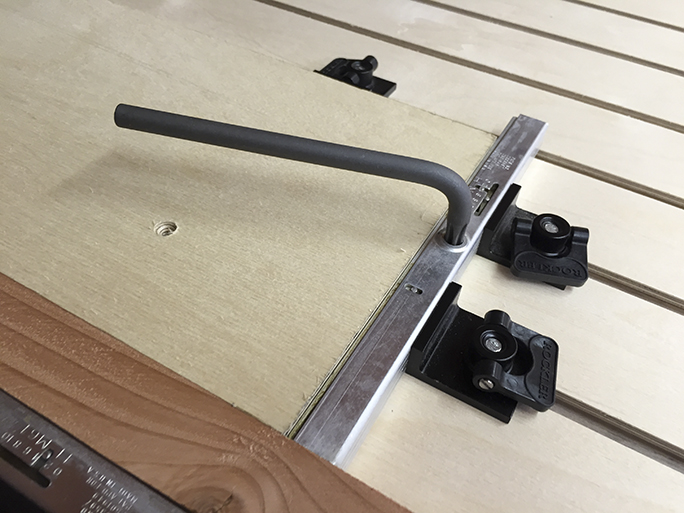 Here is the quoin key tightening the quoin along the short dimension of my test board.

Several weeks back I was searching high and low for some kind of clamp to attach to my T-slot board to affix my wood. It was then that I remembered the high-speed quoins in storage, so I went and got them.

And this afternoon I used the quoins to affix a test board to my T-slot board. It worked fine, and I think I have solved a problem that many CNC router owners have in holding their work down to the table. 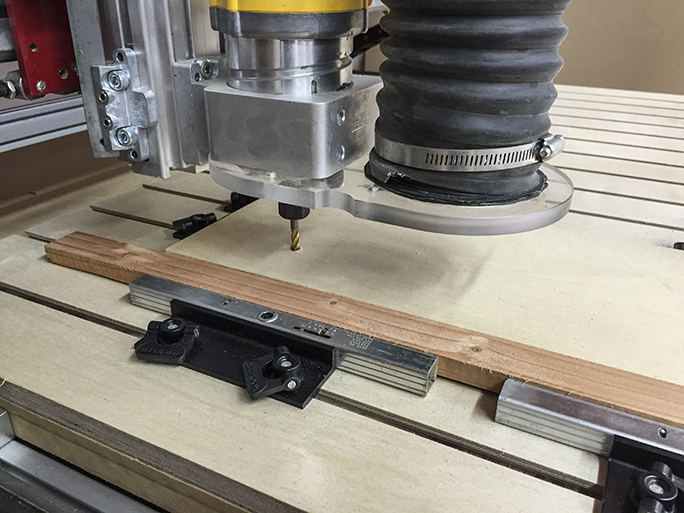 With the stock in place, the router is free to cut without much risk of hitting any of the clamps or stops.

I affixed two of the Rockler low-profile stops on each side of the board, then two more on each opposite side, in the next available T-slot. The gap, which was about 1.375 in. wide, I closed with a strip of pine cut to fit the gap. Between that strip of wood and my low-profile stops I put two of my quoins on one side, and one on the other. 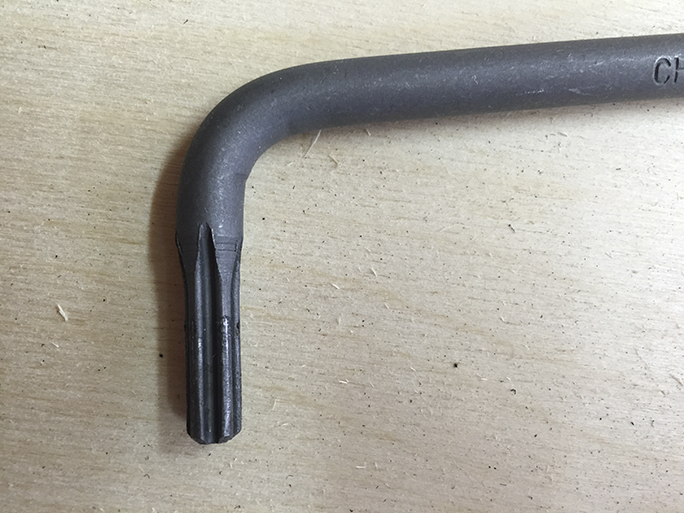 This is a close-up of the quoin key. Its gear teeth engage a gear inside the high-speed quoin, where a mechanism causes the quoin to expand.

Using the quoin key (wrench), I then tightened the three quoins until the stock was held firmly in place. Quoins are only .75 in. thick, making them about the same height as the low-profile stops, and about the same height as the stock I am cutting. This is good, because I do not ever want the cutter to hit the stops or the quoins. When I get into production in the coming days, I will put thin boards all the way around the stock to put some distance between the live cutting area and the metal stops and clamps.

The printing industry still uses there quoins on foil-stamping, embossing and other relief printing machines. Using them on router tables and other machines is logical and simple.

January 2, 2015: I did my first “real” job with the T-slot board, the Rockler stops and the quoins yesterday, and it was a great success. I needed to open a larger hole in a lens board from an 8×10 Deardorf view camera to fit a large Nikkor 480mm lens.

I mounted the lens board between the quoins and the stops, with wood spacers along the edges to protect the metal parts from being hit by the router. Then I machined a new hole and six mounting screw holes in the board. It worked perfectly. 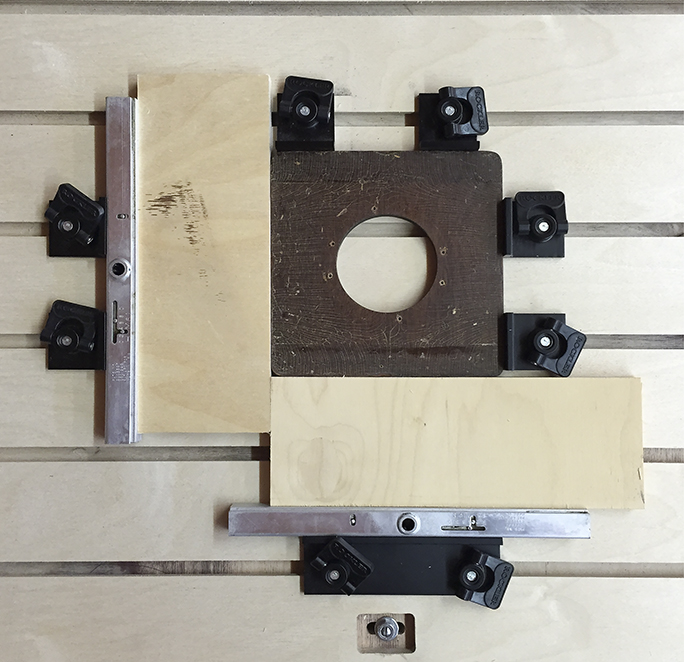 This was my lock-up. You can see the quoins safely distant from the live area. This arrangement worked perfectly.