Our night on Mount Wilson
with a really big telephoto lens

On September 26, my wife and I joined a group from the local astronomical society on a field trip to Mount Wilson, just east of Pasadena, California, where we spent the entire night observing objects in the sky. My wife and I didn’t end up spending the entire night in the observatory because I got too cold, and I had to retreat to our vehicle where I was slightly less cold. But, the others – intrepid astronomers all – spent the night there, and looked periodically at stars and binary stars and planetary clusters, and nebulae, and even a galaxy or two. It was very exciting stuff. 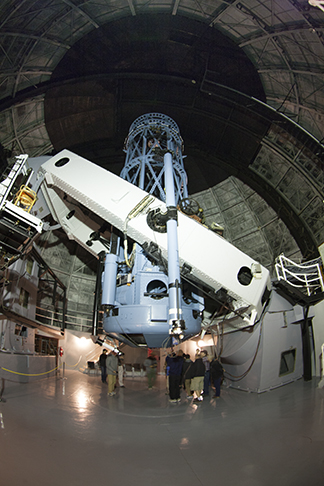 This is the 100-inch Hooker telescope on Mount Wilson. Between the years 1917 and 1947, this telescope was the largest in the world. It was superseded by the Mt. Palomar telescope in San Diego County, California. The giant mirror in the telescope is just above the cluster of people standing under the instrument.

I took lots of camera equipment because I am always interested in taking star photos, and photos of people watching stars. I like the telescopes and the observatory as much as I like looking at distant stellar objects. I had planned to do a time-lapse movie of the observatory (didn’t work), and many interior photos of the telescope with one or more of my very wide angle lenses. The most recent acquisition on that front is a Canon 8-15mm fisheye zoom lens that I bought just a few days before the observatory visit. With this lens you can point the camera at the horizon and get your own toes in the photo (I admit this isn’t something one normally wants in his photos). But it did allow me to take some grand images of the telescope we were using. 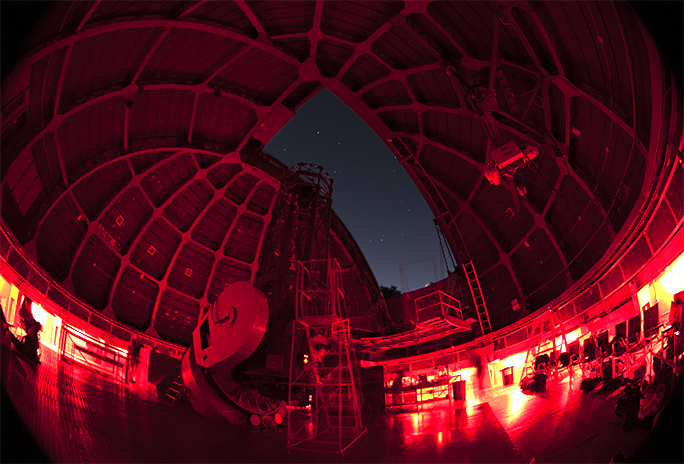 This is the interior of the 60-inch telescope dome with the telescope pointed out into space. The 60-inch instrument is used exclusively for public all-night astronomical sessions by trained docents who operate the device and explain the sights to visitors.

The telescope in question is the medium size 60-inch reflector that was built at the beginning of the 20th century by Mr. George Ellery Hale (the Hale-Bopp Comet is named after him). The funds came from Andrew Carnegie who entrusted a considerable sum to the young astronomer who wanted to study the sun and the stars. Hale did not disappoint. With the funds he built the largest solar telescope in history at the top of Mount Wilson, and then the 60-inch reflector telescope on the same peak. For years it was the largest optical telescope in the world. Several years later John D. Hooker endowed the construction of Mount Wilson’s 100-inch telescope, which took the honor of being the largest until it, too, was supplanted by a Hale-built telescope in San Diego County, California, atop Mount Palomar. That telescope, a 200-inch design, was unchallenged for many years until the bigger telescopes on Mauna Kea were built. 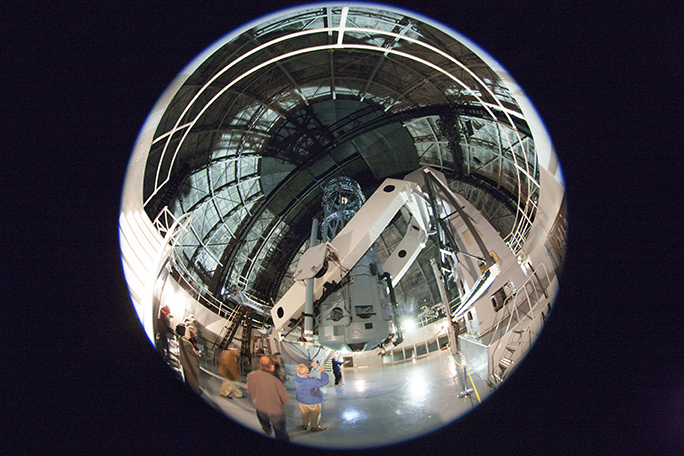 This is the 180-degree view of the Hooker 100-inch telescope. The dome was closed when the group toured the facility.

We started the evening with a tour of the facility, walking up to the base of the 150-foot solar telescope, around the 60-inch telescope, then we got an interior tour of the 100-inch optical telescope on Mount Wilson. Also on the mountain is a modern optical telescope array called CHARA, which is owned and operated by the Georgia State University. CHARA is made up of six separate 40-inch reflector telescopes that each feed their optical product down light tubes that converge in an amazing building that adjusts the timing of those optical images by bouncing them around on long tables with stationary mirrors, then focusing the converged result onto a digital sensor in a digital astronomical device. The effect of these six telescopes looking at an object in the universe is the equivalent of having a single mirror that is over 1000 feet in diameter. 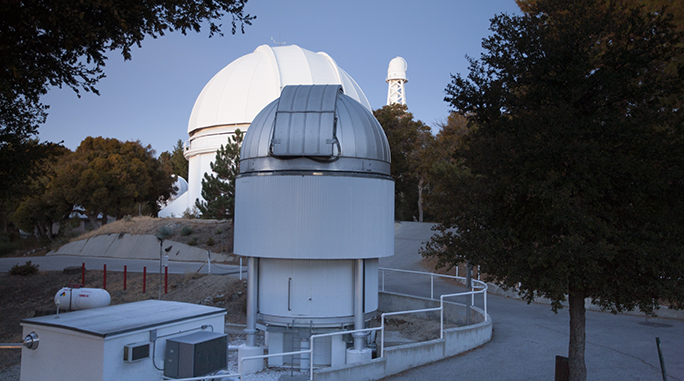 Here is what the Mount Wilson web site says about CHARA:
The Center for High Angular Resolution Astronomy (CHARA) of Georgia State University has built the highest resolution interferometric telescope array in the world for the study of objects in visible and infrared wavelengths. With six 40-inch telescopes at distances of up to 330-meters apart (almost 1/4 mile), the CHARA Array can detect much finer detail on distant objects than ever before. Fully operational since 2005, the CHARA array is being used to measure sizes, shapes, temperatures, distances, masses and luminosities of stars. In 2007, it produced the first image ever made of the surface of a sun-like star. More recently, CHARA successfully imaged the once-every-27-years eclipse of the previously mysterious binary star system Epsilon Aurigae as well as the famous eclipsing binary star Algol (beta Persei).

While were were on the mountain, and our astronomer guide was pointing our celestial objects, we were treated to the same views that Albert Einstein once made in the same structures. His image is found in photos around the observatory and adjacent buildings. On the first floor of the 60-inch telescope building is a locker with Edwin Hubble’s name on it. The locker stands next to others with the names of George E. Hale and other storied astronomers who worked on the telescopes at Mount Wilson.

This is the 150-foot solar telescope on Mount Wilson. It was used until recently to measure sunspots on our sun. It is still operated by volunteers, but has lost its funding from its owners, the University of California, Los Angeles.

The 60-inch telescope is now used exclusively for public tours and all-night astronomical sessions. Groups like ours can reserve the instrument, and gather for the night with the assistance of a professional astronomer who will operate the huge telescope, and allow each person to climb the stairs and look through the eyepiece at distant celestial objects. It is apparently the only telescope of its size in the world devoted exclusively to public use. The 100-inch Hooker telescope is still used for science, and can be reserved for experimentation by anyone in the scientific community for astronomical studies.

Even though I got too cold and chickened-out in the middle of the night, I still enjoyed the experience, and treasure the images that I took of the telescope being used to see distant galaxies and stars. Next time I will take warmer clothes and be better prepared for the temperature extremes.