An Ode of Hatred for the Pocket Wizard FlexTT5

An update on this post: Phil Bradon, a product marketing manager for Pocket Wizard, contacted me and has arranged for me to try the new Pocket Wizard Plus III transceivers to see if they will solve my problems with triggering my Canon strobe flash units. I have accepted his offer, and will report on my success here after they arrive, and I have given them a try.

I appreciate his gentle response to my ode, and want to acknowledge his kindness.

There are, occasionally, things that make me go raving mad.

My Pocket Wizard FlexTT5 transceivers are an example. I have been a customer of Pocket Wizard for years, and I own three of their earlier devices, each of which has worked nicely. To say I was a delighted customer would be too strong, but to say “satisfied” would be fair. 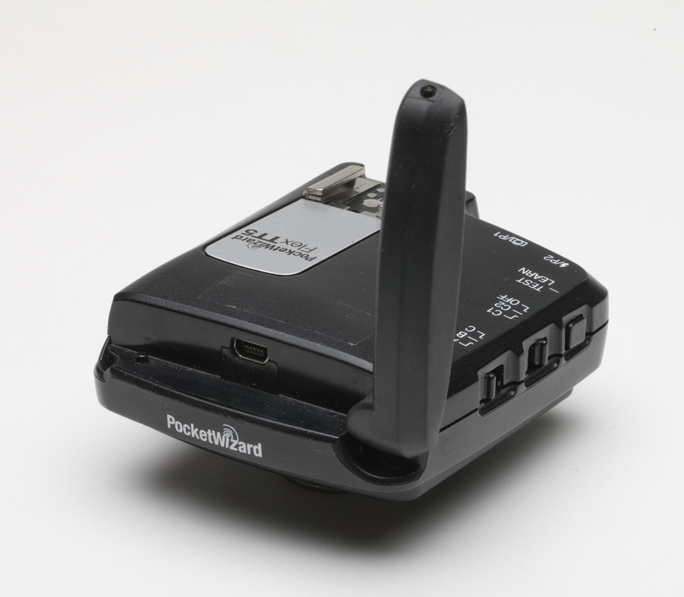 When they announced the FlexTT5 series, which work with either Nikon or Canon strobes, I jumped, and bought three of them. These devices work (or are advertised to work) with my Canon 580EXII strobe flash units, and provide a host of TTL features-over-radio. Pocket Wizard said that they would transmit 1,000 feet or more – nice – and that they were the answer to my TTL strobe flash dreams.

Sorry. Those dreams have turned into nightmares.

The TT1 transceivers don’t work. And, my goodness I have tried, and tried to make them work.

The problem started immediately after I got them, which is a couple of years ago. I tried to get them to do “normal” things, like fire my strobes from moderate distances like 25 feet from the camera. No luck. I moved them closer, and sometimes they worked. Other times nothing happened. It was very frustrating.

So, I went to the Pocket Wizard web site, and I learned that there was a problem with Canon strobes emitting radio-frequency interference that made these units fail to work optimally some of the time. What could be done? Buy these plastic shields to put around your strobes, and the problem would go away. 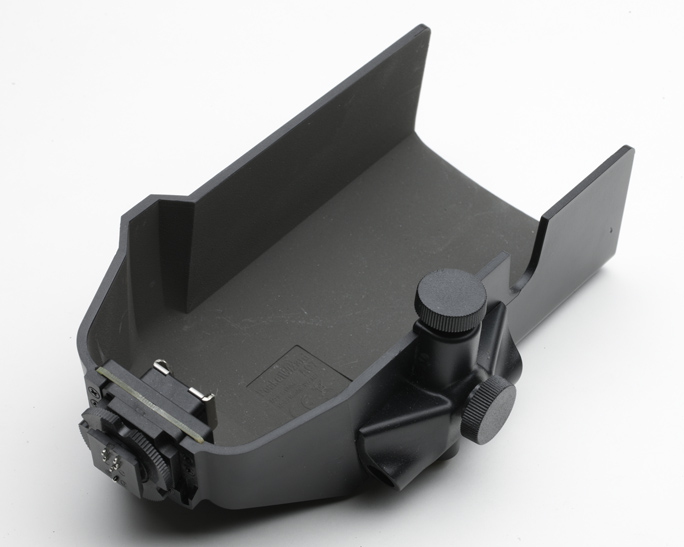 The dumb plastic RF shield made for the Canon 580 EX II strobe. The indent on the right allows one to push the button on the side of the strobe unit, but the shield prevents it from folding at the middle – so why did they put the indent there?

So, I bought two of the plastic shields (I spent a small boatload of money on them), and I installed them, and very quickly discovered that they rendered my strobe flash units essentially useless. The shields prevent the strobe units from folding forward to direct light out the front. I could only use them in a fully straight position, which is really dumb. 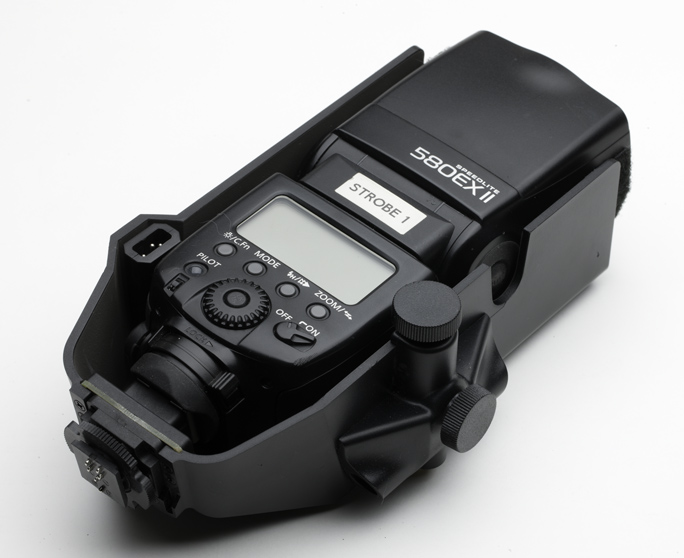 One of my Canon strobes in the dumb plastic shield. You can see the dumb isolation framis at the bottom.

And, I use an external battery pack for my 580 EX strobes. Pocket Wizard provided a little 90-degree connector to make the connection of my cable possible, which I appreciated.

In this configuration I attempted to use them for news photography. It was a disaster, so I gave up on the plastic shields.

Then, Pocket Wizard suggested that I get the little conductive cloth bags which would eliminate the radio-frequency interference. I bought two of them, spending about $50 more to solve my (their) problem. 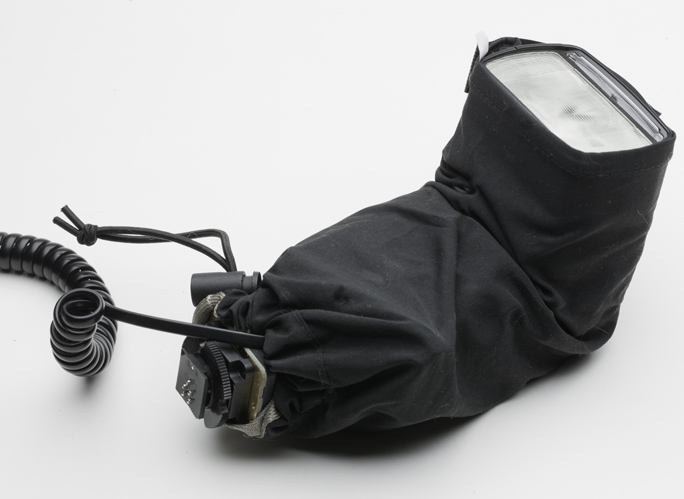 My Canon 580 EX II mummified in the dumb conductive RF shield bag, and the dumb isolator framis on the bottom.

These bags come with what I call the “dumb isolation framis” which is a hot-shoe adapter that isolates the strobe from the camera, the Pocket Wizard, and ostensibly the source of RF interference. These framises are about an inch thick, which makes it difficult for me to use my strobes in a soft box or other modifier bracket because the center of the strobe is then one inch higher than it is supposed to be. I overlooked that and forged ahead.

When using the (dumb) isolation cloth bag, you can’t get to the controls on the back of the Canon strobe. You have to loosen the drawstring, and then wiggle the bag upward (getting it over the external power cord is very difficult) to get to the LCD screen. Often, while attempting to get this to work, I gave up in frustration; news does not wait for the Pocket Wizard conductive bag. Another bad idea.

Note: These RF problems do not affect the Nikon versions of the TT5 units; those apparently work wonderfully.

As for range, I have seen the online video where some nice guy uses his Canon 580 EX II strobe with a PW TT5 transceiver for a distance of over 500 feet. It’s very impressive. Three weeks ago I needed to shoot across a city street and through a window at a man siting in a restaurant. It was about 60 feet. The stupid things would not transmit that far, even when mummified in the (dumb) RF bag. I was so frustrated that I gave up.

I’m sure some of you are thinking “Oh, you probably had bad batteries.” Don’t get me started on batteries! I have bought several hundreds of dollars’ worth of batteries, rechargeable, non-rechargeable, and nothing makes them work correctly. It’s not the batteries.

I dropped one my my strobes one day. It fell about 10 inches from my hand to a concrete floor, and it landed on the metal foot that was connected to the bottom hot-shoe of the TT5. The (dumb) isolator framis was above that, followed by the strobe itself. The bottom hot-shoe cracked and broke off.

So, I sent it back to Pocket Wizard with a charge to my credit card of something like $125, and they kindly sent me a new one (I guess fixing the foot was more difficult than replacing the entire unit).

I put the new one into the old one’s place, and tightened the hot-shoe. It broke off as I watched, and I hadn’t even tightened it very much. So, the new one broke immediately on installation, and remains broken to this day. 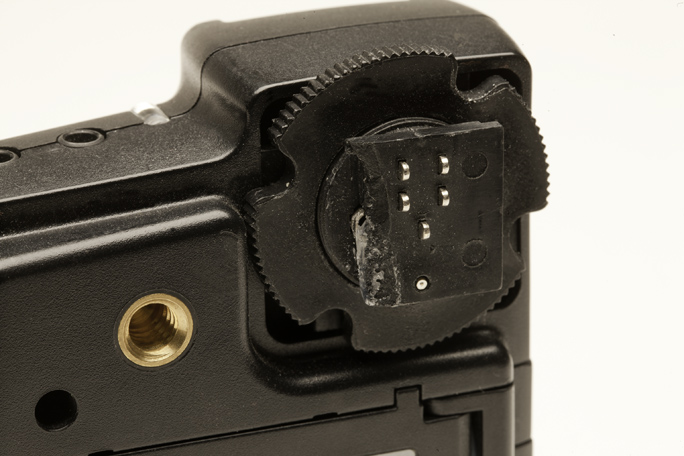 The broken foot of the hot-shoe. I live with this because it’s too much trouble to send it back and get another one. I think I might try using this unit as a skeet-shooting target this weekend.

What am I going to do next?

I might try the next edition Pocket Wizards, and abandon the TTL versions. The new ones look good. But, unlike the TT1 models, they don’t allow me to connect them to my strobe units with the hot-shoe, instead requiring a short cable adapter, which I also hate. I’ll almost certainly end up with the Pocket Wizards stuck to the back of my strobes with Velcro and a cable. And, they will probably work fine, and I will grumble and get some work done.

I wish that Pocket Wizard would just admit that the TT5 product for the Canon strobes is a complete disaster, and give me my money back.

For them, I have written this little ode:

How do I despise mine Pocket Wizard FlexTT5?

Let me count the ways!

Whilst the hot-shoe broke within an hour of its replacement, I spat and cursed (this due to the fact that it is made of a villainous plastic material, not strong enough for its own screw-keeper)

Whenst the device faileth to shoot images in a burst, sometimes faileth to respond to any signal at all (for reasons unknown to mine eyes and brain)

Whilst the device has never worked as advertised

Mine own experience is more in the realm of 15 cubits! (which is sorely shy of the prediction)

A device so poorly engineered that it won’t work with the Canon Speedlights to which it ist paired, (Electromagnetic radiations, they protest!)

… and then they asketh me to buy a pribbling plastic shield that was so lame that it faileth to allow me to sorely use mine own Speedlights, except in a straight-up position.

(But, I want mine light to travel outward, as the jackal sneaks upon its prey, upon the Earth and not whilst pointed at the stars or the ceiling!)

And, then, for additional lucre, I acquired the slightly less-mumblejack black shield bags, which wrap around mine Speedlights as would a mummy’s cloths.

But, lo! These electromagnetic shield bags prevent me from accessing mine own controls, so making the lights go from TTL to MAN is essentially impossible (and they don’t easily allow for mine own power cable to plugeth-into the Speedlights, so I fight and scrape to get the silky bags off the bottom)

But then the “Wizards” forced me to add churlish, boil-brained Electromagnetic Isolator Blocks to the bottom of mine strobes, adding a finger of depth to them,

…and making them not fitteth in mine soft-boxes, and then to affix the clapper-clawed silken shield bags to these blocks, further isolating me from mine controls.

I have given many shekels in exchange for these accursed devices, and wish that I had not done so, a sum of many hundreds!

And, I am no better off than I was before I was familiar with the FlexTT5.

Whosoever created the FlexxTT5 (that works perfectly well on the strobes-by-Nikon) is as a cur! Didst thou not ever test these maggoty devices on the Canon Speedlights?

Brian Lawler is an Emeritus Professor of Graphic Communication at California Polytechnic State University, San Luis Obispo and currently Guest Professor at Hochschule München. He writes about graphic arts processes and technologies for various industry publications, and on his blog, The Blognosticator.
View all posts by Brian Lawler →
This entry was posted in Curmudgeon, Photography. Bookmark the permalink.