I have a great hobby – hot air ballooning – and I get to practice it occasionally. This year has been a pretty good year for my ballooning adventures, including this last weekend when I flew with my good friends at an annual event called WHAMOBASS. WHAMOBASS is an acronym for the Whiskey-Hill, Atherton, Menlo Oaks Ballooning and Sporting Society. It was founded by our dear friend Deke Sonnichsen of Menlo Park. 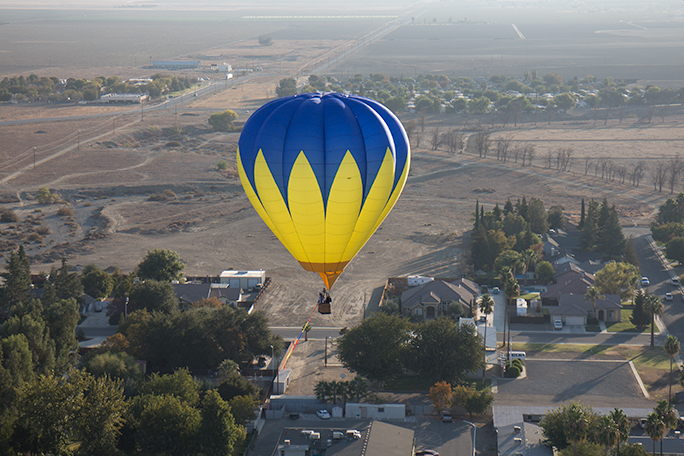 This is the balloon Marguerite, in which I flew on Saturday and Sunday mornings. In this photo, the balloon is being piloted by my friend Jim Eckford. After he landed, I climbed in and continued on for another 45 minutes over the pistachio orchards.

WHAMOBASS is the longest-running balloon event in the world, at 49 consecutive years. It is currently held in Coalinga, California, on the west side of California’s vast San Joaquin Valley. The town of Coalinga has about 18,000 citizens, and is home to two large prisons, a trauma hospital (likely a result of being located near California’s major Interstate Highway 5), and a lot of pistachio trees. It used to be the cotton capital of the state, but that industry dried up, literally, with the shortage of water in the region.

Pistachios use just one-fifth the water that cotton required, so the agricultural community has been planting those trees in the former cotton fields, and reaping the rewards of a nut-in-great-demand. 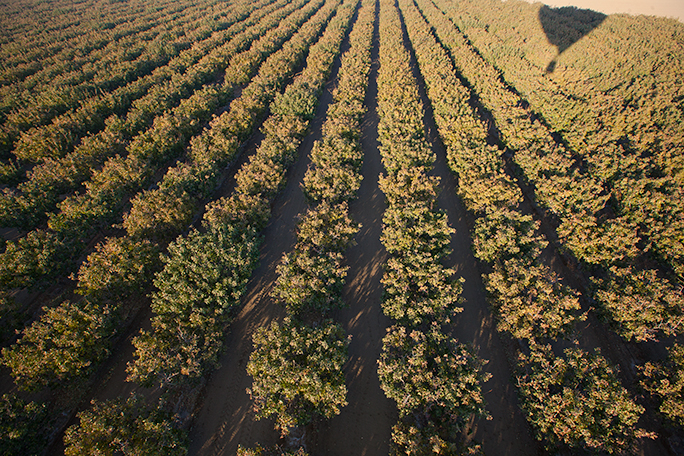 This is my first image of the pistachio orchard, balloon shadow on the upper-right.

We took off on Saturday into a clear sky. Twenty-one balloons floated in the long valley for a couple of hours, then landed and packed up and headed out to breakfast. On Sunday morning we did it again, but there was smoke in the sky, so the morning was not as pretty. 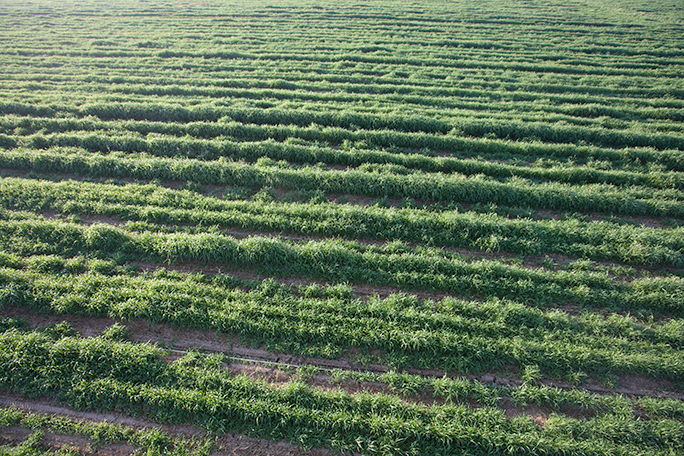 Switchgrass makes interesting patterns in the landscape. I love the undulations of the rows in the distance.

I flew as pilot on both days for one flight, and pilots are generally required to pay constant attention to their surroundings and circumstances. Occasionally I carry a camera around my neck for taking a photo or two in the short moments when I can take my eyes off of the approaching countryside. I did that this weekend, and I got some nice photos on take-off and in mid-flight. I can’t take photos of my landings because I am always too busy getting the balloon gently to the ground and ensuring that my passengers are safe. 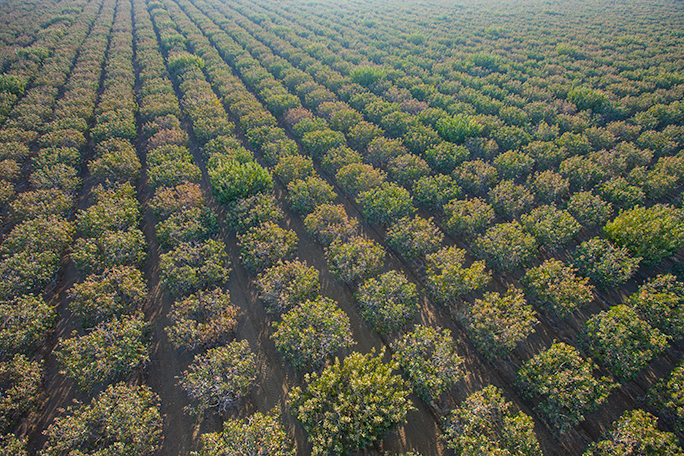 Though subtle, the colors of pistachios are superb. There is a hint of red here and there, a brighter shade of green in only the occasional treetop. It’s beautiful to see from this overhead perch.

While flying on Sunday I was treated to the spectacle of aerial patterns, as always. The first of these was a mysterious grass crop that had delightful undulations and textures. I learned after landing that the crop is Switchgrass, a plant used to make ethanol. The second was the pistachio trees, which from ground level appear to be nearly colorless. They are carefully planted in rows, and they are kept trimmed to almost identical height. But one in every ten or so is a maverick – showing a little more color or sporting a different haircut. I found this attractive, and I shot a handful of photos to record the textures of the nut trees.

I used my position in the balloon basket, flying very low over the orchard to see the world from a slightly different point of view. It’s a great opportunity to appreciate the patterns of the land and record them onto a digital sensor.

Brian Lawler is an Emeritus Professor of Graphic Communication at California Polytechnic State University, San Luis Obispo and was a Guest Professor at Hochschule München from September, 2021 to September, 2022. He writes about graphic arts processes and technologies for various industry publications, and on his blog, The Blognosticator.
View all posts by Brian Lawler →
This entry was posted in Adventures, Photography and tagged ballooning, California, Coalinga, hot-air balloon, orchard, pistachio orchard, pistachios, WHAMOBASS. Bookmark the permalink.