I have written about my mountain-top GigaPan photos in recent months. The results have been spectacular, and I am very pleased with the photos. Carrying the equipment to the mountain tops has been my problem.

The tripod I have been using is perfectly appropriate to the task. It’s a Manfrotto aluminum video tripod. Made for sturdiness, the tripod is moderately heavy, and adding the GigaPan motorized head to the top of it adds a few more pounds to the load. To get the combination to the top of my local mountains I have strapped the tripod and head to the frame of a 1960s era Kelty backpack. That frame by itself is not very heavy, probably three pounds.

This is the Terrace Hill photo I made on Friday afternoon. The GigaPan image is 18.3 GB, a huge photo that would print at about 67 feet wide at 300 ppi if I needed to do that (and fortunately I do not). Click on the image to see a double-size version, or visit GigaPan.com to see the full-resolution version with interactive zoom.

Add a Camelbak water backpack (a necessity) and the total rig comes in at about 45 lbs. I then hand-carry my Canon camera and its 100-400 mm zoom lens, which is another five pounds. With all this on my back, a recent 1300-foot ascent was almost too much for me. I reached the top exhausted, and sat on a rock for 30 minutes before deciding to go back down without making a photo. It was too hazy to get a nice panorama.

I already own a carbon fiber tripod made by Manfrotto. It’s nice, but it’s too light for the GigaPan unit and my camera. I needed a strong and stable tripod, but lighter than the one I have been using.

I searched not very far and wide to Really Right Stuff, the famous manufacturer of camera mounts and tripods located conveniently just three miles from my home. There I was shown a variety of that company’s new carbon-fiber tripods, one of which is a perfect replacement for the heavy one I have been carrying. The Really Right Stuff model TVC-33 is the one I chose. It comes with a flat top, but that can be changed to an optional bowl top, which I chose because I have a 75mm bowl on the bottom of the GigaPan head. 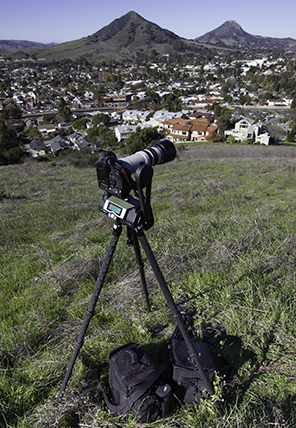 This is the new Really Right Stuff carbon-fiber tripod on Terrace Hill yesterday. On the ground beneath the tripod are two camera bags. One of them was eventually hung on the hook below the tripod head.

And, while I was visiting Really Right Stuff, I was shown two other items that I bought. One is a replacement plate for the GigaPan GP-CB head which makes it much easier for folks who have Really Right Stuff plates on their cameras and lenses to mount the camera/lens to the GigaPan. The one that comes with the GigaPan is a two-piece unit that requires a Bogen-style quick-release plate on the lens. It is fine, but inconvenient for me. 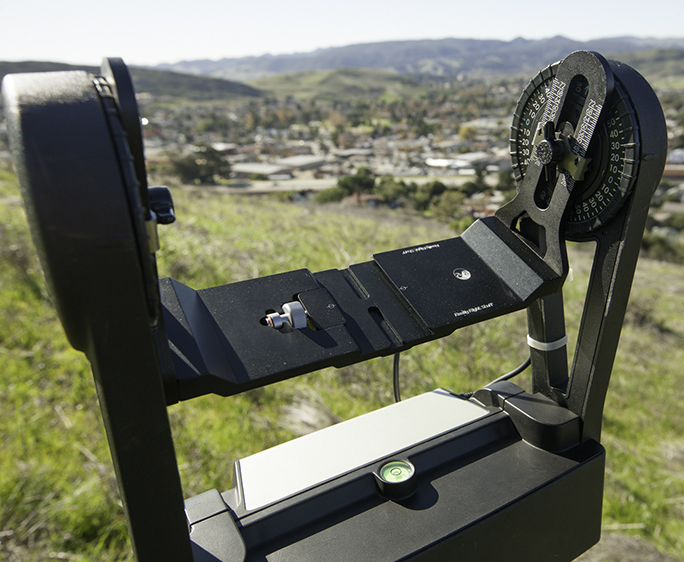 This is my GigaPan tripod head with the Really Right Stuff plate mounted. This simplifies the mounting of a camera and lens on the unit, and it is very slightly lighter than the original plate.

With that plate in place, I can mount my camera and its 100-400mm lens to the GigaPan unit in about three seconds. The lens plate slides into the mount, I tighten a screw on the plate, and I’m ready to shoot. Replacing the original plate on the GigaPan took about five minutes.

Then my friend Carla at Really Right Stuff showed me the pièce-de-résistance, a new multi-tool that looks like a screwdriver, and contains a clip of tool tips and a hex wrench for the installation and tightening of various devices in the field. On both ends of this multi-tool are 3/8-16 screw threads. By removing the screw handle that came with my 75mm bowl (Manfrotto), and replacing it with the Really RIght Suff multi-tool, I now have a tightener of about the same weight, and I have a set of screwdrivers and a hex wrench. 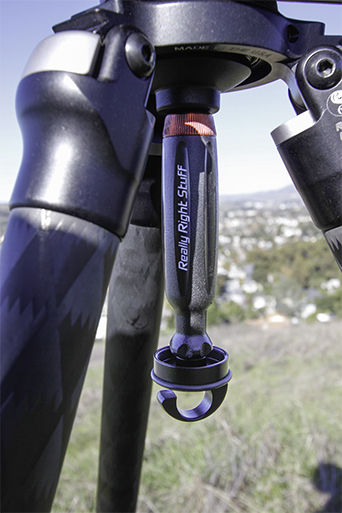 This is the Really Right Stuff multi-tool in its location on my tripod. It tightens the 75mm bowl at the top, and it provides threads for a hook on the bottom (the hook is not included). In addition, it has 12 tools inside the handle.

The sum of all this is that the GigaPan is slightly lighter now with the Really Right Stuff plate instead of the original, and the tripod significantly lighter than the Manfrotto. In the center of my new tripod is the Really Right Stuff multi-tool, and on the bottom of that is a hook that I can use to hang a camera case or a bag of rocks to add weight to the GigaPan rig when I reach the top of a mountain.

All I need now is two of these, and I could sling a hammock between them to take a nap while making a GigaPan image (several hundred or thousand exposures).