Things I learned on my recent trip to Chicago

Back from Chicago a full week, I was reviewing my notes last night, and I have a handful of observations to share with you. 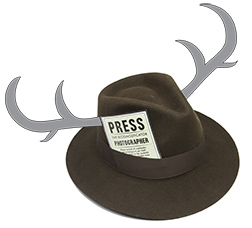 This year I wore my fedora, with my Blognosticator “PRESS” card sticking out of it. I realized at the end of the day that I was the only person on the show floor with a fedora. This probably shouldn’t have surprised me, but for some reason it did. I also realized that wearing a fedora is easier than stowing a fedora on an airplane. There is nowhere to put a fedora on an airplane, with all the overhead storage filled by the business Bedouins with their “carry-on” cases. So I left the fedora on my head for most of the flight, and put it in my lap when it became a nuisance.

I have an idea for the airlines: instead of charging for checked baggage, why don’t you charge a fee for carry-on luggage, and let people check one bag for free? That would change the character of flight altogether. With every flight full, and every overhead compartment overflowing, it’s getting downright dangerous on U.S. airliners. Just one small jolt on landing, and someone is going to be killed by a flying carry-on carry-on bag. I have seen the doors on overhead compartments pop open on landing, and it’s not pretty.

I was upset when I read the fine print of my “contract” with United Airlines. It says that I must pay $100 to ship antlers as checked baggage. This really threw me, as I was just getting used to the old $50 fee for antlers. I wish they had made this clear earlier.

While searching Google for antler images, I encountered this bizarre offer: personalized art with your name spelled in antlers! I’m not making this up. Go to simplypersonalized.com to find this rare and wonderful gift for the antler lover in your life!

Smoking, a god-given right to some, is still legal in Chicago. People smoke outside of restaurants while having meals and sipping wine at their outdoor tables. I’m from smoking-is-illegal-almost-everywhere-California, and the presence of cigarette smoke in a place where I was eating was unpleasant. Smoking is illegal in the interior parts of restaurants, and for that I am grateful. I really don’t like cigarette smoke. Chicago needs to add outdoor dining areas to its smoking-prohibited areas.

I was amused, as I walked past the Wrigley Building, that the sidewalks are dotted with chewing gum – lots of it. I wonder if Mr. Wrigley had any sense of his contribution to that problem with urban sidewalk scum. That’s not a Chicago-specific problem; I see it everywhere, and I wonder why people who chew gum cannot dispose of it in a less public way. Steam-cleaning sidewalks is an expensive way to deal with already-chewed gum.

I envy the company that prints the graphics for The Gap store in Chicago. There is an image there that was printed on an ink-jet printer in one piece three stories tall and about 18 feet wide. I imagine this was printed on a grand format machine like the VuTek from EFI. The vinyl material is suspended from the wall above the third floor staircase, and it reaches all the way to the ground floor. What a glorious example of very-large format ink-jet printing! When I look at work like this I think the printing industry is going to get along just fine, as long as there is demand for seamless three-story prints to hang in Gap stores, or antler-themed personalized art. 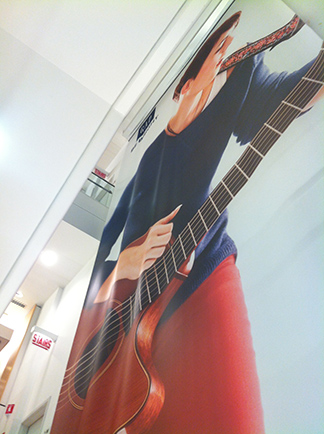 This is the three-story ink-jet graphic on display at The Gap on Michigan Avenue in Chicago’s Magnificent Mile. I walked up and down the stairs to examine it in detail, searching for seams: it has none.

I love the Blue Line train! What a deal! It allows me to get off of an airplane, and without leaving the terminal, get into a transit train that will take me all the way downtown for less than $4.00. I carried my Chicago CTA card in my wallet for over a year with some money left on it, and I used it to make the trip from O’Hare to Clark & Lake in less than 40 minutes. When I really love the Blue Line is when it goes whizzing past lines of taxicabs stuck in traffic near the airport. If only there was subway service to the Magnificent Mile.

On Sunday, while hiking from my hotel to the Shedd Aquarium, I was approached by a man waving flyers and shouting, “Boycott Bank of America!!” I found this ironic because Bank of America was the sponsor of that day’s fabulously successful Chicago Marathon. I refused his flyer, and explained that I have been boycotting Bank of America since 1970. I’m doing a pretty good job of it too; you can tell that B of A is really suffering because I am not a customer. My feint allowed me to continue on the trek without having to keep, or dispose of his flyer. I wish he had offered me some Wrigley’s gum; at least I know what to do with that when I am finished chewing it.

Speaking of the Marathon, I watched and photographed the horde of about 52,000 runners as they passed me near my hotel. In their wake were hundreds of jackets, wind-breakers, sweaters and sweatshirts on the street, dropped by the runners at about mile two as they got warmed. I wondered if they come back to get their discarded garments after running the 26-mile race.

This is a photo of just a few hundred of the 52,000 runners who participated in the Chicago Marathon this year. The winner of the event finished just over two hours later, setting a course record, and making the rest of us feel like useless couch-potatoes.

The Windy City moniker that Chicago has earned was particularly true last week. The usually gorgeous October weather in Chicago had made the left-hand turn it makes every fall, and the temperatures dropped precipitously. I was told by the locals that I should have been there a week earlier; it was 70 last week, they said. It was 38 when I got there, so I bought some new gloves to celebrate the occasion. Nice gloves; I’m not sure what to do with them in the heat wave we are experiencing at home this week.

At the airport on my return to no-smoking California, there was a new sign telling me that if I was born in 1937 or earlier I didn’t have to take off my shoes. That came as a relief, because I was born in 1950, and I just love to take off my shoes at the airport. I use those old fashioned shoes with laces on them, and it’s a joy to take them off and pad through the total-body-scanner in my stocking feet. Elderly terrorists take note: this is your chance!

A week at home has done me some good. It has allowed me to reflect on how much I don’t like air travel (or more correctly, getting through airport security), and how much I like the fall weather in San Luis Obispo. It’s a beautiful morning here, with the temperature pushing 80 degrees at eight in the morning. My commute to school today will take me almost ten minutes on my trusty Specialized bicycle, and once there I will enjoy the company of my wonderful students, eager participants in California’s educational system. Today we will be profiling the Heidelberg press, another source of joy in my life.

I’m glad to be home, yet I look forward to my next trip to Chicago for Print 13 next fall. I already have the gloves in case it gets cold.

Brian Lawler is an Emeritus Professor of Graphic Communication at California Polytechnic State University, San Luis Obispo and currently Guest Professor at Hochschule München. He writes about graphic arts processes and technologies for various industry publications, and on his blog, The Blognosticator.
View all posts by Brian Lawler →
This entry was posted in People, Photography, Printing and Printing Processes. Bookmark the permalink.