The idea of a “mirrorless” camera – good and bad

I have a very nice Canon professional camera. I love it. But it’s really noisy when the shutter is activated. It makes a clop-snap sound that is sometimes unacceptable to the circumstances. When I was photographing the Festival Mozaic concerts last week it was unacceptable. I have a few strategies for dealing with this. One is to wrap the camera and lens in a sweater, which helps quite a bit. Another is to shoot only in the fortissimo parts, which is even harder because you have to anticipate these and not goof.

Sony has pioneered a number of professional cameras that are correctly called mirrorless SLR cameras. They use a partly-reflective mirror that remains in place in front of the image sensor, and does not move for exposure. This, of course, takes a small toll on the amount of light that strikes the sensor, but with the sensitivity of sensors these days, it’s probably unimportant (except in very low light).

Nikon and others have come to market with “mirrorless” cameras in the last year, and these seem to be successful. They take good photos, and they are perhaps mis-named. Canon announced their first “mirrorless” camera last week, a camera that looks an awful lot like one of their point-and-shoot cameras, but with interchangeable lenses, and the ability to accept almost all of the company’s pro lenses. 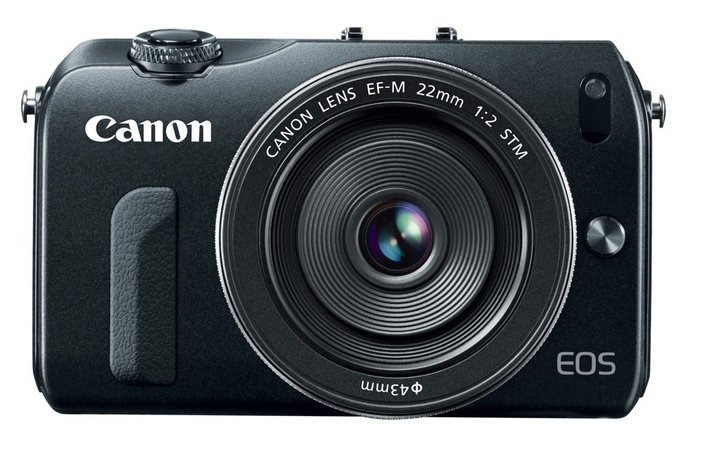 Canon’s EOS-M “mirrorless” camera looks more like a point-and-shoot than a pro camera, and it is. But it is a silent, 17+ megapixel camera that accepts most Canon lenses.

At first I thought, “what the heck, all point-and-shoot cameras are mirrorless,” and in fact this one is a 2/3 size sensor camera body without a pentaprism viewfinder. The camera uses an LCD viewfinder on the back and has no optical viewfinder at all. Canon and others argue that this constitutes “mirrorless” and I am loathe to disagree. But I want an optical viewfinder.

The benefit of such a camera would be its silence – no mirror slapping and no shutter curtain snapping. The problem with a camera that has no optical viewfinder is that I can’t use them to compose photos very well. I have tried with my Canon T2i camera, and it’s extremely difficult for me. In daylight I can’t see the viewfinder well enough to focus, and that is the greatest weakness of this new camera from Canon. At the Bonneville Salt Flats two years back I tried, fruitlessly, to photograph race cars with the T2i in broad daylight. I couldn’t see a thing on the viewfinder, so I built a cardboard viewfinder-extender and taped it to the back of the camera. This provided me with a bit better view of things, but it was still nearly impossible. 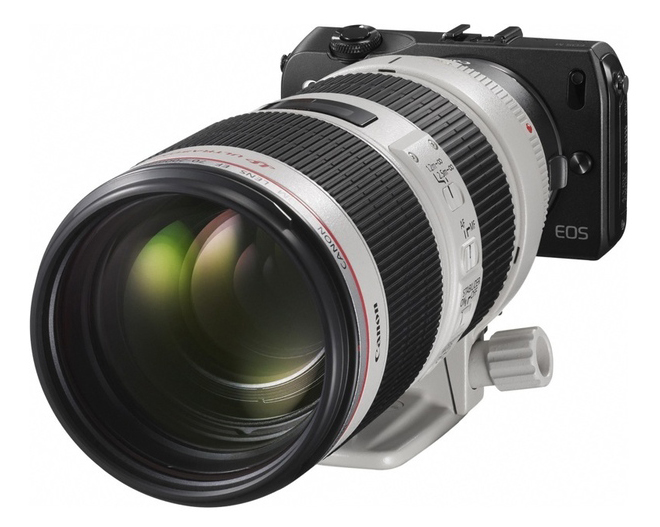 The newly-announced Canon EOS-M camera fitted with the Canon 70-200 mm f2.8 zoom lens. The idea of putting a large professional lens on a camera like this intrigues me. It would make classical music concert photography much more practical because of its silence.

A benefit is that the lenses that I already own will work on this new camera (with an optional lens mount adapter), and I welcome that. I would buy one just to use for photography at concerts with one of my long lenses. Such a camera would be a delightful alternative to shooting with my noisy 1ds Mark III camera. 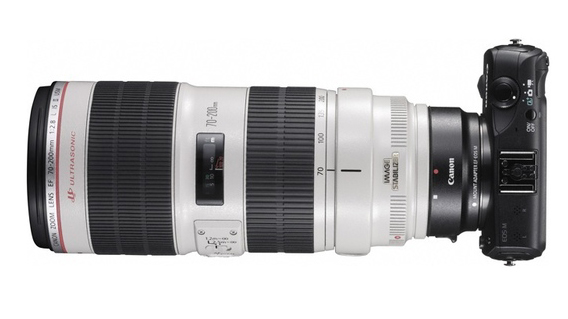 From the top-down, the same camera and lens combination shows the optional lens mount adapter on the camera that allows the big lenses to be mounted on the new camera.

I would welcome some version of a true mirrorless SLR from Canon, one without a mirror that moves out of the way for the photos to be taken. In the short term, the new mirrorless camera from Canon will make a difference to me. Maybe I will join the ranks of zillions who have pre-ordered the new camera from Canon.

Brian Lawler is an Emeritus Professor of Graphic Communication at California Polytechnic State University, San Luis Obispo. He writes about graphic arts processes and technologies for various industry publications, and on his blog, The Blognosticator.
View all posts by Brian Lawler →
This entry was posted in New technology, People, Photography. Bookmark the permalink.