Note to my kind readers (January, 2017):
The mysterious forces described below no longer seem to work. I have experimented with this in recent months, and have had no luck in repairing JPEGs using this technique. But read on anyway! It will still work with older Mac operating systems…

I attended the monthly meeting of the local Macintosh Users Group last night (I am the Treasurer of the group), and listened as a bright young man names Justin Sharp told the audience how to fix things before taking a Mac in for service. It was pretty good stuff.

At one point he was talking about file types, and he mentioned that the Macintosh Operating System will convert photos from one format to another just by changing the suffix of the file.

I was skeptical of this, as I have had to solve problems caused by this same technique for customers and students, and I just couldn’t believe it was true.

His comment was that if you change the .png suffix of a PNG file to .jpg, and click on the “Use .jpg” alert that follows, the file will actually be converted to a JPEG. It seemed preposterous to me. So when I got home I tested it, and in fact it does not work.

After you change the suffix to .jpg, then attempt to open the file in Adobe Photoshop, you’ll get this error message.

But, I tried a few other variations on this theme, and I discovered that some combinations of photo file types do work this way, just by changing the suffix. I searched the Interwebs and looked high and low for documentation to explain this, and I can’t find any. I did find a blog where Automator is discussed in detail, and it turns out that Automator can convert some files from one type to another without the support of any application. This must be an OS-level tool that Automator calls, and it will convert file types quickly and easily.

So, let’s assume that the OS calls the AppleEvent (called an OSAX) for a file conversion from PNG to TIFF, executes it on a file, and makes it into a TIFF file. Or, you could do the opposite. I tested this, and it works. It may also be that PNG files and TIFF files have so much in common that all it takes is to change the file suffix to make Photoshop think it’s opening the opposite, and it just works. A happy conicidence?

But, when I tried to change JPEG to TIFF or JPEG to PNG, it will not work.

Here’s a chart of my findings: 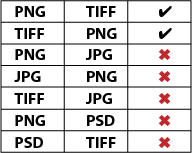 This can be summarized as follows: PNG and TIFF can be converted back and forth by changing the suffix of the file. Nothing else works.

And, it is an interesting phenomenon that I am chalking-up to Mysterious Forces at work.

This will not work on Windows.

Brian Lawler is an Emeritus Professor of Graphic Communication at California Polytechnic State University, San Luis Obispo. He writes about graphic arts processes and technologies for various industry publications, and on his blog, The Blognosticator.
View all posts by Brian Lawler →
This entry was posted in Photography, Software. Bookmark the permalink.