I was standing on a hilltop called Star Hill late last night, advancing my panoramic camera mount and pushing the remote shutter button. My camera was aimed into the night sky, with the foreground in each shot. Every frame was 25 seconds long, a pretty long time for a single exposure. A few feet away, my other camera was clicking on a similar interval, 28-second exposures every 30 seconds. That camera was making a time-lapse movie of the same scene I was shooting as a panorama.

This was my first attempt at “astronomical photography” which is to say I have never taken photos like this before. And, unlike everyone around me, I was not shooting through a telescope. I was shooting with two normal cameras, both of which were fitted with very wide angle lenses – the opposite of telescopes, really.

This is a 360-degree panorama of the set-up on Star Hill. Telescopes up to 22 inches were trained on the night sky, and many people made the trek up the hill to look through the viewfinders at distant stars and galaxies. Click on the image to see it twice this size.

What I wanted to get was a time-lapse movie of the night sky with movement in the stars. I also wanted the astronomers of the group to be in my photos, adding a sense of their mission to the photo. I could go out any night and take photos of the night sky, but this night was special because it involved the people who bring life to this late-night activity.

I shared this adventure with my pal Dave Garth, who is a formidable photographer. He was armed with cameras and tripods. We both felt out of place showing up for the first time on Star Hill, unannounced, but invited by the astronomers who make their monthly event open to everyyone. But we had not even made it to the top of the hill when a nice man named Joseph Carro walked up and greeted us, then introduced us to the small number of astronomers who were setting up their instruments. To say we were welcomed is an understatement. We were friends with several of these scientist/hobbyists within minutes.

And, the talk ranged from “how big is that telescope?” to “How many people come to this event every month?”

The answer to that question we learned, as the night got darker, was about 50 people – maybe more. It is an amazingly popular event. Small clusters of people would gather around one of the telescopes, as its owner/astronomer would explain the sky. Blue-green lasers would occasionally point into the heavens as one of the experts named a constellation, identified a star, or pointed to the tip of Sagittarius. “Anyone want to see M50?” I heard several times during the evening.

I set-up my time-lapse camera first, setting it for the circumstances, which included an ample amount of daylight (we arrived an hour before sunset). It was clicking away as I prepared my other camera for the nighttime panorama – a photo I have never attempted before.

This is my most successful night sky panoramic image. It is a full 360 degrees, and it features at least a couple of galaxies including our own. The lights in the foreground are various activities with the telescopes and nearby campground lights. Click on the image to see it twice as large.

In the days and weeks before this event, I scoured the Interwebs looking for data about star photography, hoping to learn as much as I could about exposures, apertures, lenses, positions, strategies, and more. And, I learned a lot. There are many generous astrophotographers out there who share their knowledge about the night sky, and more specifically about how to take photos of it.

I had little crib-sheets tucked into my pockets. One was a list of things to take with me (jacket, red flashlight, tripods, lenses, interval timers, extra batteries for the cameras, etc.). The other contained cryptic notes: “Polaris, something in foreground, ISO 6400? Oak tree?” 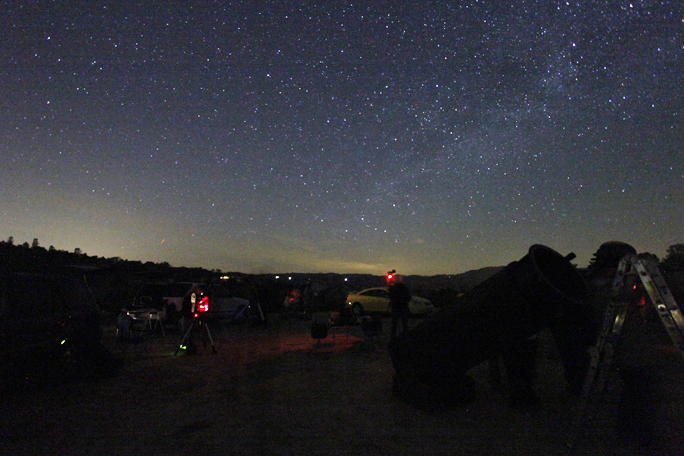 This is a still photo from the time-lapse movie. The movie can be viewed online. This video is dedicated to my father-in-law, Bud Fenter for Father’s Day 2012.

I pointed the time-lapse camera into the north sky, guessing where Polaris would eventually be visible. This camera could not be moved once it started taking photos, so I wanted to be sure to get it positioned correctly. And, it’s impossible to focus once it’s dark, so I was exceptionally careful to focus the camera on infinity – I suspected that the stars are about that far away. Click, click… or more correctly click… (wait 28 seconds)… click.

I listened to the astronomers telling stories about the stars, about white dwarfs and black holes and about star clusters and spiral nebulae. It was both fascinating and amazing. People came and people left. Families gathered to look through the eyepieces of various telescopes. Joseph Carro, retired from the pharmaceutical industry, was explaining the night sky in Spanish to a family who didn’t speak English (I had learned earlier that Mr. Carro teaches Spanish at Cuesta College in San Luis Obispo). I found this explanation very impressive, as I couldn’t do it in any language.

Three hours passed in an instant, and Dave and I eventually packed our gear and headed home, arriving just before midnight back in town. It had been a fascinating evening of stargazing and photography. I had no idea if my efforts at night photography had been successful. I made a hot cup of tea and transferred my images into the computer. I was anxious to see if I had been successful at either the time-lapse or the panoramic.

And, I am very pleased to say yes, I was successful at both. Now I wish I had stayed out there longer, recording the Earth’s rotation around the stars for another hour or maybe two (it would be nice to have more of the time-lapse material).

This was a spectacular evening for me! I took several night-sky panoramic images, a few finished minutes of time-lapse photography, and I came away feeling like this would be fun to do again next month when the Astronomical Society gathers again on Star Hill for their monthly event on Star Hill. Perhaps I will see you there.

Brian Lawler is an Emeritus Professor of Graphic Communication at California Polytechnic State University, San Luis Obispo and currently Guest Professor at Hochschule München. He writes about graphic arts processes and technologies for various industry publications, and on his blog, The Blognosticator.
View all posts by Brian Lawler →
This entry was posted in New technology, Panoramic Photography, People, Photography. Bookmark the permalink.