It’s amazing what a fake mustache will do for an old guy!

I attended a party last night called The Great Catsby, a fund-raiser for the local animal shelter. The theme was, obviously, 1920s.

I had decided a few weeks earlier to go as a press photographer, armed with my trusty 1939 Speed Graphic 4×5 press camera. It’s a gem of a camera, leather and wood and brass, with a focal-plane shutter that can still expose a sheet of film for just 1/1000 of a second. 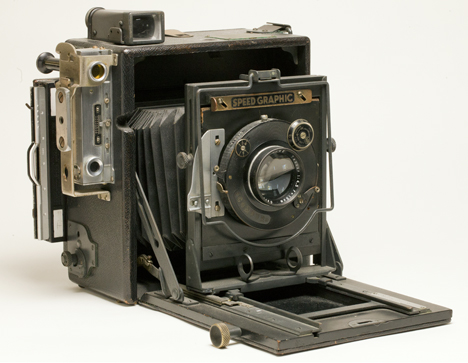 This is my Speed Graphic camera. It converted me into a minor celebrity last night at a costume party for the local animal shelter.

I bought a fedora (Indiana Jones brand), added a PRESS card to the hat band (in era-appropriate type fonts), and hoped that the anachronism of a camera ten years too new would not cause me embarrassment.

I dressed in working class duds, a pair of dark green-gray soft slacks, businessman’s shoes, and a plain white shirt buttoned at the collar with a black bow tie. 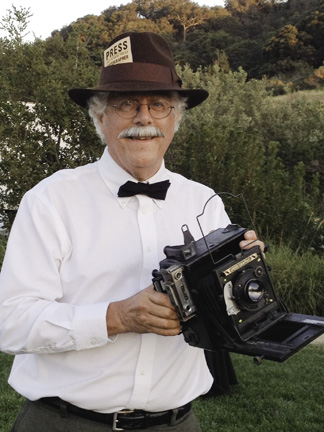 This is the older me with my Speed Graphic camera. I’m glad no one noticed that the camera is a decade too new to be in perfect period style for the party; I would have been humiliated!
I added two authentic fountain pens to my shirt pocket, and then glued a fake mustache on my upper lip.

At the party I walked around stalking people with my camera. I was seeking scandal! And, I took some very good photos, though it’s a shame I hadn’t loaded any actual film in the camera. I also do not own an era-appropriate flash of any kind. In the 1930s that would have meant either using flash powder or flash bulbs. Alas, I own neither of those technologies.

I found it fascinating that people I have known for decades glanced at me, and walked on, completely unaware of my identity. Is it possible that the fake moustache was so powerful a disguise that I became invisible? I think it’s true, because it happened about a dozen times yesterday evening. I was a total stranger to these people.

My camera was the darling of the evening, though. Lots of people wanted to see it, and wanted to know how it works, and is it real?

I had a lot of short conversations about the camera’s famous focal-plane shutter and its amazing action-stopping abilities. It really is an impressive bit of technology. The shutter is a bottom-to-top cloth curtain mechanism with a variable-slit opening that slides very quickly across the short dimension of the film. It is powered by a hand-wound spring motor. 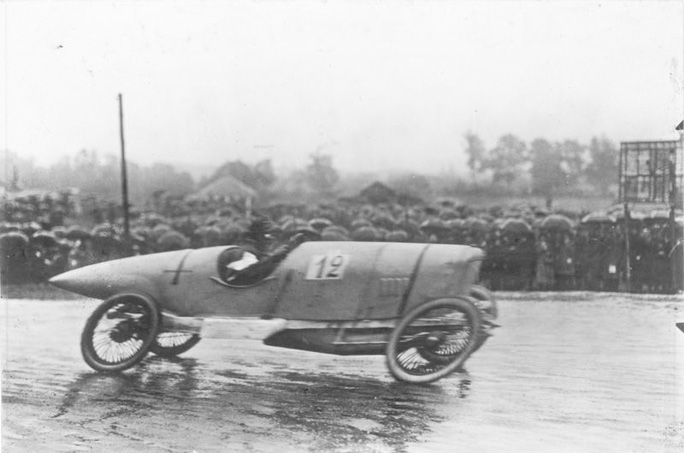 This is an image from 1922 which shows the strange effect of using a vertical focal-plane shutter on a fast-moving object. As the shutter moves from bottom to top, the image is gradually recorded onto the film – as the car keeps moving. The result is the “italicized” image of a car speeding by. This image is from Wikipedia, provided by the German National Archive, Berlin. – Photographer unknown.

Mine was made in 1939 by the Folmer Graflex Corp., of Rochester, New York. It’s called a “pre-anniversary” model. Though the camera can be used with what are called “barrel” lenses (lenses with an adjustable aperture but no shutter mechanism), mine has both the focal-plane shutter and a mechanical shutter in its beautiful Carl Zeiss 150mm f4.5 Tessar lens. To shoot with the focal-plane shutter, I need to lock the shutter in the lens open, set the aperture, then use the rear shutter to make the exposure. 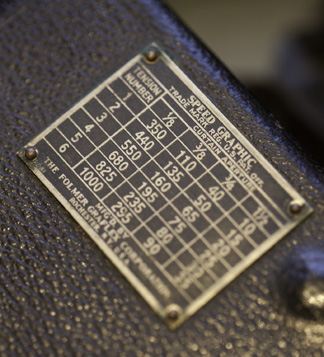 This is the focal-plane shutter speed chart on the top of my Speed Graphic. It has four curtain apertures, and 6 shutter speeds. There are 24 total variations of speed available, topping-out at 1/1000 sec.

The bellows is made of leather, and it’s still light-tight, and mine features a rangefinder viewfinder for focusing (it’s quite difficult to use). The whole thing folds up into a nice leather-covered cube, and it has a sturdy leather handle on the left side.

I used to own dozens of them, but today I only own two 4×5 film holders. I can shoot up to four photos with the camera before retreating to a darkroom to reload the film holders. But, I don’t shoot with film very often, so this shortage of film holders is not much of a burden on me. 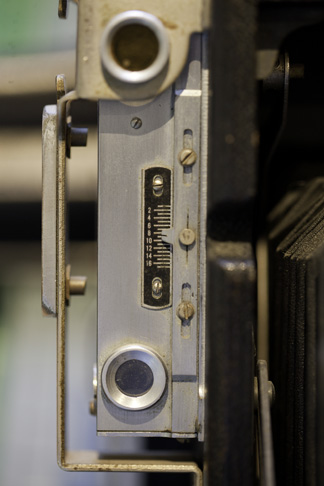 This is a close-up of the rangefinder viewfinder. You look through a tiny tube to line-up two images of the subject. When they overlap, you’re in focus!

The mustache makes me look like a much older version of me, perhaps ten years my senior. I am amazed by the transformative effect of some gray hair on my upper lip. Both my father and my uncle sported gray/white mustaches for a while; I think these photos make me look like them.

It was fun to get out the Speed Graphic and fire its shutter a few dozen times last night. It was also fun to tease my friends with an older version of me. Some may never have known that they were talking to me during the evening. But, for those who were intrigued by the old camera, I was happy to provide a glimpse of photographic history.

Several people told me that their “grandfather had one like that,” and that made me feel really old because I have one like that (though I am not the original owner).

Brian Lawler is an Emeritus Professor of Graphic Communication at California Polytechnic State University, San Luis Obispo and currently Guest Professor at Hochschule München. He writes about graphic arts processes and technologies for various industry publications, and on his blog, The Blognosticator.
View all posts by Brian Lawler →
This entry was posted in History, Photography. Bookmark the permalink.