My father, Russell Lawler, was born in San Francisco on November 18, 1905. It’s easy for me to remember this because it was six months to the day before the devastating earthquake and fire that struck the city. 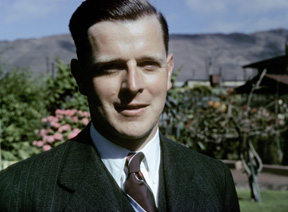 This is my father, photographed in Antofogasta, Chile, in 1942.

He graduated from San Francisco’s Lowell High School, and then from the University of California, Berkeley, with a degree in civil engineering. Though I never knew him as a civil engineer, he practiced the trade for a while, then moved into the insurance business.

In the mid-1930s my father worked for the Pacific National Fire Insurance Company, located at 376 Pine Street, San Francisco. He went into the field occasionally to evaluate property, to investigate insurance claims, and to visit the company’s clients. And, during that time he had several opportunities to visit the Golden Gate Bridge, under construction at the mouth of the San Francisco Bay. I don’t know if his several tours of the Golden Gate Bridge were in an official capacity, or if he was just lucky enough to be included in a mid-construction tour.

Fortunately he took a camera along. 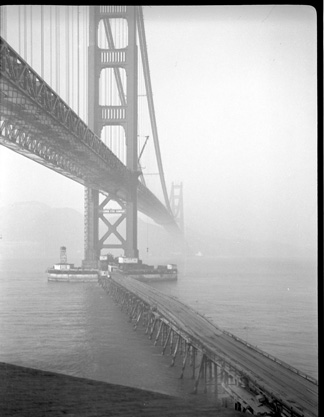 Though my father died in 1988, his photos live on. I found some of them recently while going through a box of family memorabilia. They are 6 x 8 cm. black and white negatives taken by my father’s camera. Big negatives are always nice to find, because they have so much information in them. These photos are properly exposed, mostly in focus, and reasonably composed. If nothing else, they are very interesting because of the subject matter: the construction of the Golden Gate Bridge, which took place 75 years ago, opening this day in 1937. 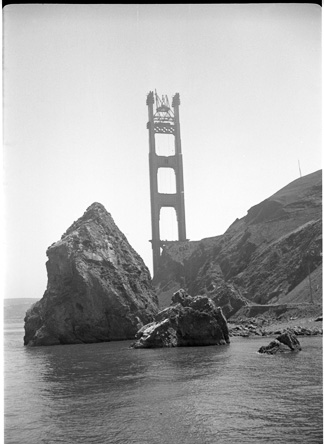 This photo, taken probably two years earlier, is at the Marin County end of the bridge. It shows the tower without cables, roadway or approach highway.

The photos show the bridge towers, some with the suspension cable cradles in place, others protruding starkly into the sky with nothing attached. On at least one of his photographic journeys (I think these photos represent three different trips to the bridge), he traveled by boat from the San Francisco side to the Marin County side of the construction site. 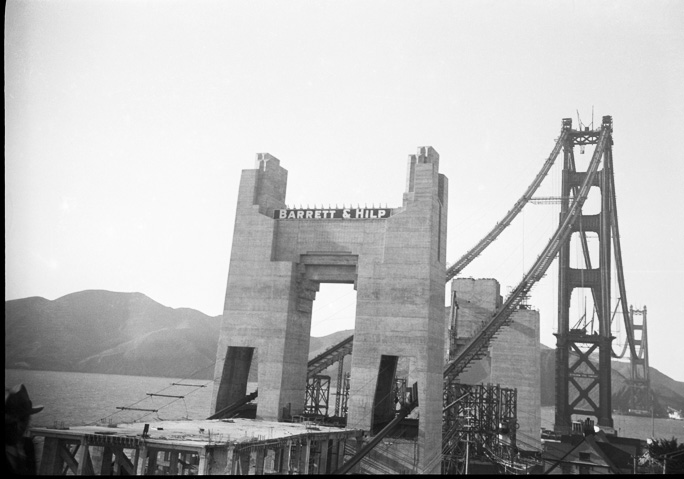 My father had an odd penchant for taking photos with no people in them, and that is true for these photos also. People appear in only two of the 40 frames of film in our family’s collection. Two men are seen walking on a wooden causeway in the distance. in another image, the others on the tour are walking away from the camera, and up the hill to the buttress at the Marin County side of the bridge. There are no workers, no smiling faces, no people in the cranes or on the bridge structure. 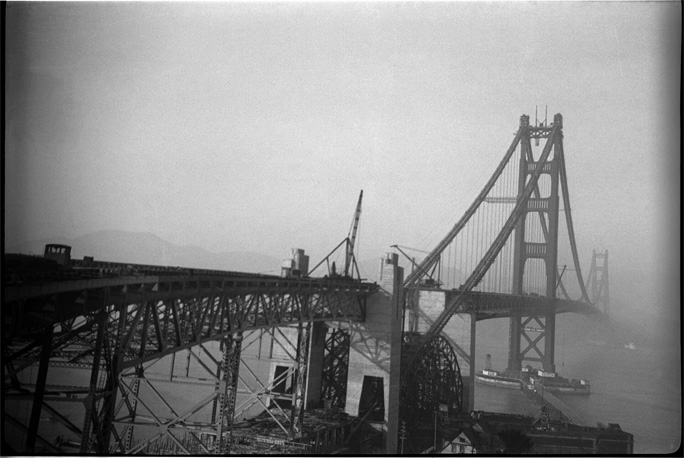 Another image from about the same location shows the approaching cantilever roadway on the San Francisco end, the suspension cables are in place (and the cradles are still there, indicating that they had not been wrapped yet), and the bridge roadway is nearly complete. This would have been months later.

My sisters and brothers and I have always wondered how Russell managed to take so many photos with so few people in them (On a month-long trip to Mexico in 1959, my father took 8mm movies, hours and hours and hours of them. When we returned, he edited them into a delightful movie with animated title sequences. When we watched it a few years ago we all noticed that he never photographed our mother, and we children only appear in the movie by accident. It’s as if we were not on the trip with him). 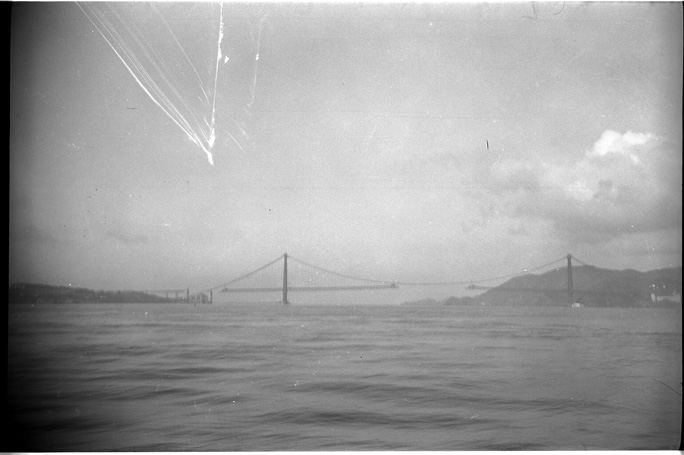 Though badly scratched, this image shows the Golden Gate Bridge with its incomplete roadway on both the San Francisco side and at mid-section. This was taken from a boat while west of Alcatraz Island looking west.

That quirk aside, these photos represent some interesting documentary work of the construction of the Golden Gate Bridge. I hope you enjoy them.

Brian Lawler is an Emeritus Professor of Graphic Communication at California Polytechnic State University, San Luis Obispo. He writes about graphic arts processes and technologies for various industry publications, and on his blog, The Blognosticator.
View all posts by Brian Lawler →
This entry was posted in History, People, Photography. Bookmark the permalink.