I’m SLO at some things (another GigaPan story)

It took me five days to squeeze the last GigaPan image into my schedule. I had classes to teach, meetings to attend, a midterm exam to write, a rehearsal with my choral group, and a meeting of the San Luis Obispo Mac User Group – SLOMUG. I couldn’t find the hours to put the big Mission San Luis Obispo image together until last night.

The abbreviation of San Luis Obispo can often be the source of humorous acronyms and abbreviations. We have a local Internet supplier called SLONET, for example. I have been thinking about calling my exhibition of panoramic images SLOpano, or Take it SLO, or SLOmo Pano, or something trite that includes the SLO moniker.

And I did finally get the Mission SLO pano into the GigaPan Stitch software and on its way to being a very high resolution panoramic image. It is comprised of 798 separate 60 MB images, which according to my calculator is nearly 800 images, which translates into the monstrous file of over 17.74 GB. There is a significant overlap of images when using the GigaPan rig. Though it is adjustable, the default is 30 percent.

This is the finished Mission San Luis Obispo GigaPan photo. Click on the image to go to the GigaPan site to see the ultra-high-resolution version.

When I have taken my other “normal” panoramic images, I usually shoot 12 frames, and the resulting files are a tasty 350 MB finished size. These images have about 25 percent overlap so that my other stitching software (PT GUI Professional) can make them whole without difficulty.

The hard drive companies are going to love me! Oh, yes! Since I (perhaps stubbornly) shoot everything in Camera Raw, I end up not with just one set of 798 images, but two, because I first convert all of the images to full-resolution uncompressed TIFF images for the GigaPan Stitch software to ingest. Camera Raw files from my Canon 1ds Mark III camera are typically 15-25 MB each, and the TIFFs I make from them are really large at over 60 MB each (no compression!). I will probably end up supporting an entire community of workers who will be slaving overtime to make multi-terabyte drives to support my GigaPan obsession.

Oh, yes, it has become an obsession.

The altar, main sanctuary, and side sanctuary of Mission San Luis Obispo. This is a lovely environment, and especially nice for musical performances. This image is a conventional 12-frame panoramic image taken with my own panoramic “backpacker” mount.

As I rode my bicycle to school yesterday morning, I was eyeing the mountains above Cal Poly, a beautiful vista exists up above the Poly “P” on the hill. From there I could get another sweeping view of our beautiful volcanic peaks. And, if I get up there in the next few days there may still be a trace of the lovely springtime green. Spring is short here for color. We get about three weeks of Irish green grass, then it dries quickly to the California gold we enjoy for the rest of the year. 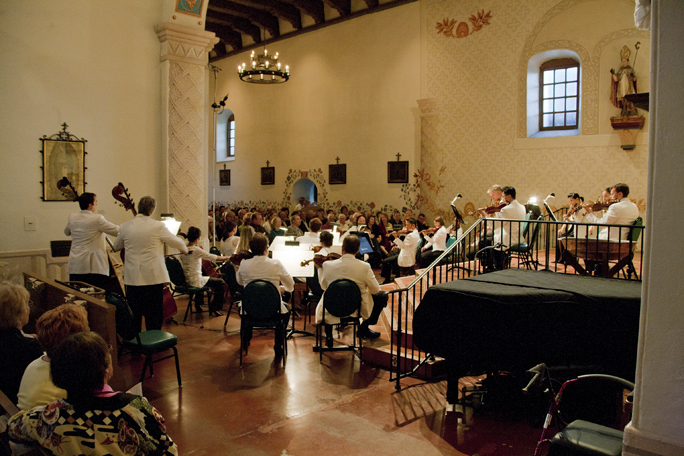 I took this photo during a performance of the Festival Mozaic orchestra performing Bach in Mission San Luis Obispo in 2010. I am the photographer for Festival Mozaic.

I have been thinking about adding some kind of bracket to the back of my old Kelty backpack to attach my horrible and heavy video tripod, making these mountain hikes a little easier on the back and shoulders. And, I have been thinking about other uses to put GigaPan’s software to work. How about flat art? Ultra-high-resolution reproduction of antique images, charts, maps? (I found some on the GigaPan site that were done by others.)

This is the mozaic of 798 images in GigaPan Stitch software. It takes a long time to load, and a long time to stitch, but the resulting images are amazing.

Then I started thinking about a wooden jig with a pin register system for indexing historic Cirkut panoramic photo prints in front of a copy camera or into a scanner. Oh, the possibilities are endless! I am literally losing sleep on this project (it’s 2:53 a.m.), and I am not sure it’s officially a project yet. 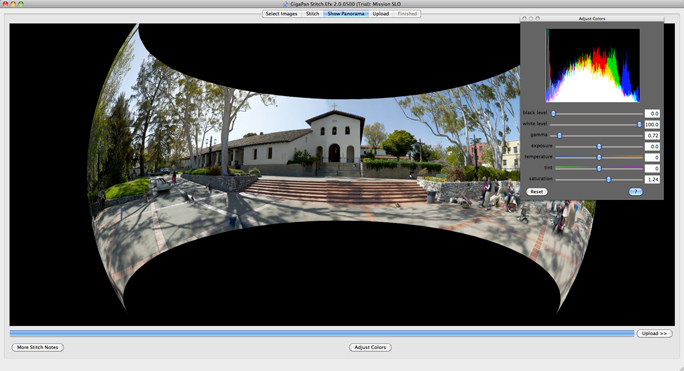 This is the finished panorama shown in GigaPan Stitch. I exported it to a Photoshop Raw file 194,256 pixels X 30,452 pixels in size. You can also see the color correction panel at the right. This is a nicely-implemented addition to Stitch. It makes simple and effective color, tint, tonality, saturation and similar corrections to these massive files.

In the online version of the photo, you can zoom in and read the inscriptions on the Mission bells, learn what year they were made (they were recently replaced), and you can see the legless waif walking (floating?) up the stairs of the Mission, the disembodied (or mis-embodied) people all around the Mission Plaza. I’m even in there! Where’s Waldo? I’m sure you can find something interesting in this photo.

There is a rather strange stitching “error” (not sure what to call it) on the steps of the Mission, which marks the beginning and the end of the panorama. Over an hour passed from start to finish, and there was a significant lighting change during that time. The camera continued to shoot at the same exposure, so the variation is understandable, but there also seems to be a positional error that crept into this image. Maybe I bumped the tripod at some point?

A GigaPan Lesson learned here: Don’t split the main subject of a panorama. I will be careful to plan better in the future to pick a start-stop point somewhere in the trees so it doesn’t show if there is a minor exposure difference in the time it takes to make the panoramic image.

A second GigaPan Lesson learned here: A much longer shutter speed would not record as many mis-embodied people. I think that a speed of 1/4 or 1/2 second would do the trick. Then, only people who stand still longer than 1/4 second would be recorded at all. The photo would look as though there was no one around. I used this technique to make people disappear from the plaza in front of Notre Dame de Paris, and it worked well. The only people in the photo are those sitting on benches; everyone else disappeared.

Overall, it’s a fantastic image, delightful to view, and it’s especially interesting to see the effect of time and motion in a busy public place while the camera turned and pitched and clicked. Please enjoy the view!

Brian Lawler is an Emeritus Professor of Graphic Communication at California Polytechnic State University, San Luis Obispo. He writes about graphic arts processes and technologies for various industry publications, and on his blog, The Blognosticator.
View all posts by Brian Lawler →
This entry was posted in Panoramic Photography, Photography. Bookmark the permalink.