My week with the Gigapan, Day One

A stitched panoramic photo involves taking a series of images with a special camera mount, then stitching those images into a whole, using software to correct for the overlaps in images, and to un-distort the resulting file.

This was my first stitched panoramic image, made with the then-new Kodak DC20 digital camera and Apple’s QuickTime VR Authoring Studio software. I think it is comprised of 16 separate images. This was my home office at the time, featuring a working antique candy store neon sign. Since then I have moved into a smaller home that cannot accommodate such luxuries.

I’ve been making panoramic images for decades, stitched panoramas since 1996. My first work with the stitched variety involved Apple’s QuickTime VR Authoring Studio software, which made gorgeous panoramic images from properly photographed originals. It had no user interface, instead using the Terminal as its control mechanism. Getting images made involved typing a command into the Terminal, listing the source images, and then letting the software work for a fairly long time. It worked well, but it was very geeky software.

This is the Taj Mahal, Agra, India, taken with a point-and-shoot camera and no tripod. United Airlines lost my tripod on this journey, and I was left to make my panoramic images on a stone bench using my Boy Scout compass for the rotational settings. It worked fine.

Eventually Apple added a user interface, making the process easier. And, as with other things from that company, they discontinued the product once it reached success.

Several other software companies picked up where Apple dropped the core. Most of these products were written by software publishers who used a body of code created by a German programmer named Helmut Dersch. His work was available gratis, and was (is) well-documented, well-commented, and it worked very well. Anyone with an interest in improving the state of the art in stitching software, or blending software, or some variation of the components of a panoramic stitching application contributed to the effort.

Over the years two products have emerged as the best in the business, one is called Autopano, the other is called PTGUI Professional. They both use Dersch’s code for the complex process of integrating and blending images, and they do it really well. I am a user of PTGUI, which has gotten better and better over the years. The Professional version now supports multiple processors, numerous methods for stitching and blending, and it has gotten so smart that you don’t even have to put your source images into the program in order; PTGUI will figure out which images go together and just makes them work. It’s almost magical.

Since my first stitched panorama experiments in 1996 I have used a variety of panoramic camera mounts, some I purchased, some I made myself. My favorite is the Backpacker’s Pano Mount, my current model, which is made almost entirely of lightweight woods. I make these mounts one at a time, and then use them until I improve on the design, then I make a new one. Though I enjoy using mounts that are made of machined aluminum, and I appreciate their accuracy and finish, I can’t stand carrying them because they weigh too much. And, almost all the mounts I have used have things that can, and do fall off, making a simple panoramic outing into a frustrating experience when you discover that the brass framis adapto-snake fell off somewhere between Glacier Point and Nevada Falls.

My mount weighs less than one pound, and it holds the unpleasantly heavy Canon 1ds Mark III camera that I use, combined with the unpleasantly heavy Canon 16-35 mm f2.8 lens that I attach to the camera. The camera and lens are a brilliant combination, providing me with extraordinary images of high resolution and exceptional sharpness. This is quite a camera for making panoramic images.

My stitched images are made from twelve or fewer individual photos, each of which is 60.2 MB in size when open. I shoot everything in Camera Raw, then convert to full size uncompressed TIFF images before stitching in PTGUI. I never use JPEG, fearful of the harm it does to images (I can see it). When I make a standard 360-degree panoramic image with my usual settings, I get a file that is about 300 MB in size. And, the size is impressive: I can make a print about six feet in length, and about 17 inches tall on my Epson ink-jet printer with these files. The results are excellent.

A couple of years ago, I read about a new panoramic mount called the Gigapan, which is a motorized stepping mount that will hold a variety of cameras. The mount is capable of making hundreds or thousands of separate images to construct images that are single-cylinder panoramas or fully spherical panoramas. It comes with its own stitching software (perhaps it has the Helmut Dersch code inside?) that can take hundreds or thousands of component images, and make them into a multi-gigabyte panoramic image.

The idea of using a Gigapan mount has gotten my attention a few times, but I postponed getting one until the right moment, a combination of nice scenery, good weather, a bit of spare time and a renewed interest in making panoramic images. We had about two inches of spring rain in the past ten days in San Luis Obispo County, and the grass is on its extended green behavior for a short while as a result. Very soon this verdant color will transform into California Gold, a dry-straw color that lasts until late November when we get our next rainfall. 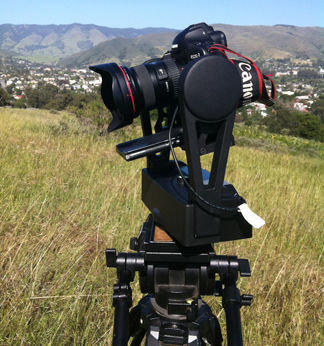 Here is Gigapan, working on my afternoon panoramic image. It took 504 separate images to make the image I did today. Once I get the image stitched in the Gigapan Stitch software, I will post a link to it here.

I rented the Gigapan Epic Pro mount this week from my friends at BorrowLenses.com. The package arrived on Friday, and I jumped in with both feet. This big Gigapan unit retails for $895, but I’m renting it because I don’t know if it’s something I need to own.

The unit is a motorized cradle that can accommodate a camera and lens of up to ten pounds. Its controls allow me to select a 360-degree panorama, or a partial panorama, and then it calculates how many frames to shoot, and it moves the camera up-down, left-right until it captures the complete set of photos needed. The controls are simple, and the operation is foolproof.

One must be prepared for the Gigapan, however. Knowing the position, or calculating the position of the optical center of your lens is helpful, and understanding how to expose for panoramic images is critical. And, one must also buy every available memory card in your county before venturing out to use the Gigapan. Shooting Camera Raw images for the three photos I took today took five 8GB memory cards, and I’m still transferring the photos to my hard drive. (Gigapan recommends JPEG, which I might try tomorrow when I make my next image. With JPEG I will worry less about card capacity.)

I took my second 360-degree panorama this afternoon, and had to pay careful attention to the number of available photos on each of my cards. I watched carefully, and paused the Gigapan twice to change cards for one photo of 504 component parts.

The Gigapan is a nice unit, and its ability to automate the process of stepped panoramic shooting is delightful. So far, I like it (except for carrying it and the heavy tripod I am using).

Tonight I jump into the Gigapan Stitch software, and I will report back tomorrow on how that process works. I’m about to make my first multi-gigabyte panoramic image.

Brian Lawler is an Emeritus Professor of Graphic Communication at California Polytechnic State University, San Luis Obispo and currently Guest Professor at Hochschule München. He writes about graphic arts processes and technologies for various industry publications, and on his blog, The Blognosticator.
View all posts by Brian Lawler →
This entry was posted in New technology, Panoramic Photography, Photography. Bookmark the permalink.