If you have a dollar to spare, and you like lots of really bad type fonts, here’s a deal for you:

FontPackPro, from Macware (a Summitsoft company) is a collection of 1,062 OpenType fonts for Mac that is normally sold for $150. Today, that collection is available for just one dollar.

The price-per-font (PPF) is 0.094 cents, which one could say is a bargain. Heck, a font for less than an penny is still a font, right? My friend Kevin O’Connor alerted me to this deal, and because it’s the last day of the year, I decided to take the plunge and buy the package. What could go wrong?

Macware bills this collection of fonts as “A premier collection of over 1000 classic, refined, designer and creative style OpenType fonts for commercial use, including a 5-computer license to use the fonts in a variety of for-profit, commercial or personal projects across your organization.” 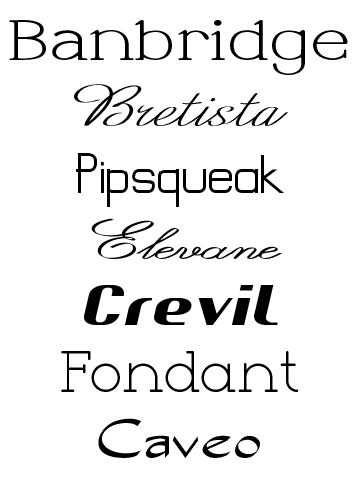 These are a few of the fonts I bought today. Unfortunately spacing irregularities, poor kerning, bad serif shapes and overall inconsistency make the fonts useless. The font called Elevane is nearly illegible.

I downloaded the package after parting with my dollar, and I opened the folder of 1,062 fonts. It is filled with a huge collection of fonts that no one has ever seen before, which is perfectly OK. I opened a dozen or so, just to take a look. Most are spindly, odd designs that have no redeeming quality, many are script fonts. Some of these look pretty good, have reasonable connections, and are attractive enough to be considered commercially useful. Maybe. Others of the fonts are really horrid.

But, that’s the nature of type design. One man’s horrid is another man’s fabulous (though I don’t think so in this case).

Though not awful, the large number of anchor points, and the inaccuracy of their placement make this font, called Banbridge, far from perfect.

Examining the fonts more closely, I find that they are lacking in soul. It’s like they were designed by a computer (which they may have been). There is little variety – even with over 1,000 fonts in the package. Almost all of these are light to medium weight, and they are unimpressive. The scripts vary from dreadful to reasonable, and almost all the fonts lack a complete set of characters. The basic European accents are present, but the symbols, mathematical characters and miscellaneous letters are all generic, not matching the fonts. 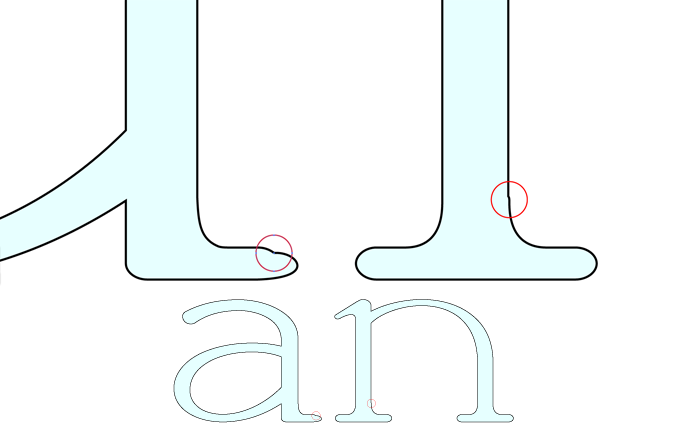 The same font – Banbridge – has blips and distortions in its outlines, which make me wonder if these fonts were drawn by a computer font generator – if such a thing exists. They do not have the fit and finish of the work of a human type designer.

I don’t want to seem like a cheapskate and a curmudgeon, one who complains about paying one dollar for over 1,000 fonts. But, even at that price, I can’t find three fonts in the entire collection that I would use.

And that’s a shame.

Brian Lawler is an Emeritus Professor of Graphic Communication at California Polytechnic State University, San Luis Obispo and currently Guest Professor at Hochschule München. He writes about graphic arts processes and technologies for various industry publications, and on his blog, The Blognosticator.
View all posts by Brian Lawler →
This entry was posted in Uncategorized. Bookmark the permalink.