My Son Patrick is a cinematographer in Los Angeles. You have probably seen his work if you watch music videos, or have looked through the LRG online catalog. You can see much more at vimeo.com (forgive my pride when I tell you he’s really good at what he does). 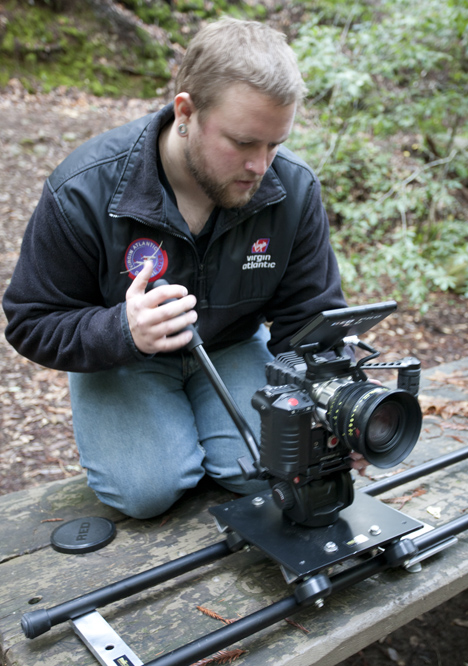 Patrick controls the Epic X camera with a Red 18-50mm lens along a small dolly track.

Patrick began his career as a movie maker years ago when he picked up my video camera and started shooting action movies in our front yard. Over the years he learned a lot about film making, ultimately graduating from the Academy of Art in San Francisco with a degree in cinematography.

Last week he “picked up” a new Red Epic X digital motion picture camera. And yesterday I was his Key Grip on a shoot in a redwood forest in Mendocino County, California. He would say, “big lens” and I would hand it to him. One thing I learned about being the Key Grip: you learn really quickly never to let go of anything until the recipient says, “Got it!”

The reason this is true is the value of the “things” I was handing him. The “Big Lens” is a $6,000 lens. It can’t ever hit the ground, or even a table. It is handled like a valuable work of art, which it is.

The Epic X is the latest digital cinema camera from Red, a California-based company that is among the leaders in the world of serious motion pictures. The Epic has a sensor in it that is capable of capturing cinema-quality images with a variety of frame rates and resolutions. My still photo background prevents me from appreciating everything it does, but I am learning. 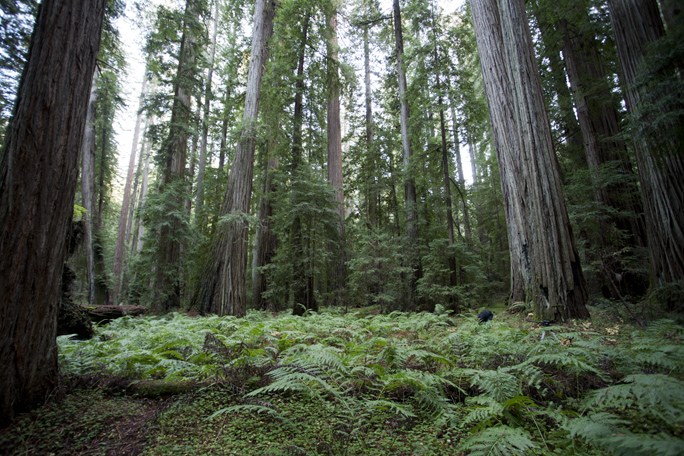 Beautiful sword ferns and a carpet of clover cover the ground in Montgomery Woods.

We were shooting video in Montgomery Woods, a California State Reserve that until 2006 boasted the tallest tree in the world. Locally, and affectionately known as The Mother of the Forest, the tree is somewhere in the 375 foot range. In 2006, arborists found a much taller tree in a nearby forest, one which measures just over 391 feet. Montgomery Woods is still a lovely place, even if its tree is in second place.

In wintertime, Montgomery Woods is fabulous. I have visited a few times in the summer months, but never in winter. On our visit yesterday we were working in near-freezing temperatures, but I was reasonably comfortable in my insulated boots and bicyclist’s mittens. 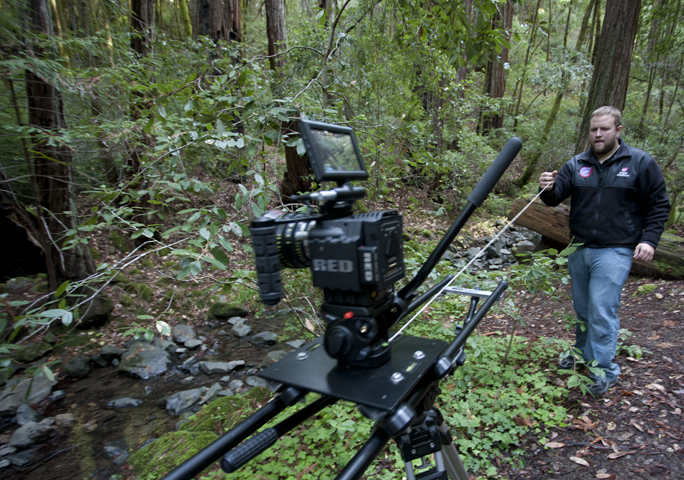 Patrick used a string to pull the Epic along its track in the forest. Beautiful mossy trees made way to views of the lush forest in these shots.

The winter visit had advantages: very few visitors – the park normally has only six visitors per hour in summer months – we saw about a dozen people in three hours. We also enjoyed seeing a forest ground cover that is not as verdant in summer. Everything is mossy green, the forest floor was covered in Sword ferns, and below those was a blanket of clover. Greens greener than almost anything in the world make this place sacred in my mind.

My cinematographer son would shout from around a tree, “Can you bring me another battery?” (We had six). I would grab the battery and take it to his shooting location.

We carried into the forest the Red Epic, two specialized lenses for that camera, and my still camera with three lenses. We also carried two tripods and a five-foot dolly track for rolling shots.

The batteries, extra memory cards (Red memory cards are 128 GB each), and extra gadgets made the shoot particularly technical; we looked like a couple of motion picture Bedouins, I am sure. But I am confident that Patrick got some wonderful video scenes. His video is posted on Vimeo.

For those interested in the Red Epic camera, you can get on the waiting list now, and expect a camera body in the coming months. The eagerness with which professional cinematographers hold Red announcements is amazing. There is a certain imprimatur about the Red. If one were cynical, one could call it a cult, but my observation is that the camera is an amazing piece of mechanical, electronic and cultural engineering. It makes beautiful cinema.

Red is driving filmmakers to digital production, and away from film, in droves. When you look at the specifications of the camera and its Mysterium sensor, you will be impressed if not amazed. Disk drive manufacturers must love Red cameras!

What impresses me about the Epic (in addition to its stunning resolution) is the new smaller size and weight. The Red One, predecessor to the Epic, weighed more than three times as much, and that made it an incredibly heavy unit when paired with almost any lens. Epic is – almost – a hand-held device, one which can be mounted in small spaces, and one which captures cinema-quality images in digital formats.

If nothing more than an opportunity to spend time with my son shooting in one of the quietest and most beautiful places on Earth, it was a wonderful cinematic adventure. I also learned how to say, “Got it!” whenever I am handed a lens.

Brian Lawler is an Emeritus Professor of Graphic Communication at California Polytechnic State University, San Luis Obispo and currently Guest Professor at Hochschule München. He writes about graphic arts processes and technologies for various industry publications, and on his blog, The Blognosticator.
View all posts by Brian Lawler →
This entry was posted in Digital video, New technology, People, Photography. Bookmark the permalink.

1 Response to Get a Grip!