This blog originally appeared on What They Think in September, 2010. I have updated it here, and will add new information on the topic in the coming days.

In my blog yesterday I described how to make a “fine art” reproduction, starting with a framed original painting. My project was off to a good start, and I had the photo studio set-up to make a digital image of that art.

My challenge wasn’t too difficult, but the photography was complicated by the fact that the art is framed. I can, but prefer not to remove the art from the frame. This is often the case with originals in frames. Sometimes one is not allowed to remove the art from its frame. Other times, like this one, it’s difficult to get the art out of the frame, then restore it to its framed condition without damage.

In any event, I was having trouble with the lighting and the glass. In order to get proper exposure across the face of the art, and not get hot spots on the edges, I had placed the lights equidistant from the corners of the artwork.

When I looked through the viewfinder, I saw the lights reflected back at me. It was time for Plan B: Polarizing filters. 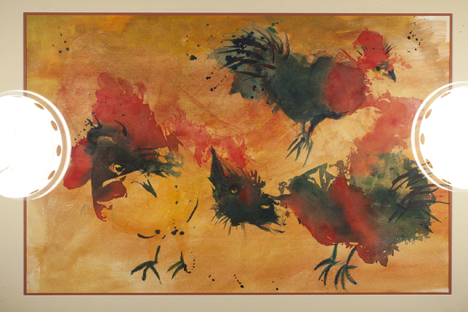 You can see the Alien Bees lights reflecting off the glass in this image, which was taken before I invested in polarizing filters and gelatine for the lamps.

I bought some Rosco polarizing gel material in a roll, and some cardboard gel holders from Paul C. Buff for the Alien Bees lights. I also bought a pair of Buff’s reflectors that hold filters. Then I bought a Tiffen circular polarizing filter for my macro lens. All of these additional goodies cost me about $300 plus a week for delivery.

Back in the studio, I set-up the shot again, this time prepared better for the facts of life with reflections. 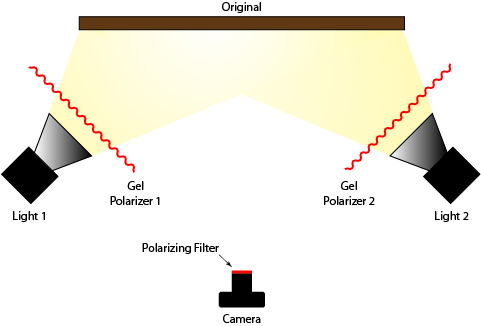 I positioned my lights exactly as I had before, added the polarizing gels to the reflectors, and then put the new polarizing filter on the lens. In five seconds the reflections were gone! Voilà! 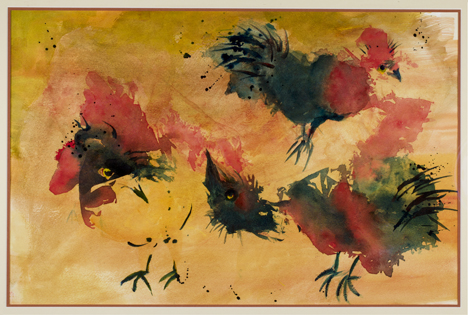 This is the image after the introduction of the polarizing filters. It is very acceptable.

Exposure is critical for fine art reproduction, so I borrowed a nice light meter from my friend Kevin O’Connor, who had a spare for the project. Kevin was also coaching from the sidelines.

I moved the lights in tiny increments until the exposure was perfect all the way across the glass, corner-to-corner.

Part three was to set a custom white balance with the camera. I use a Canon 1ds Mark III for this project, and it allows me to shoot various custom white settings, and record them to the memory card. I used a white card (could have used gray) to make a test shot, then established that white as my custom white balance.

Once I had that white balance established, I used the X-Rite ColorChecker Passport (and a full-size Color Checker also) to record the behavior of the camera on the memory card. With these images I would later make a camera profile (more on this later). 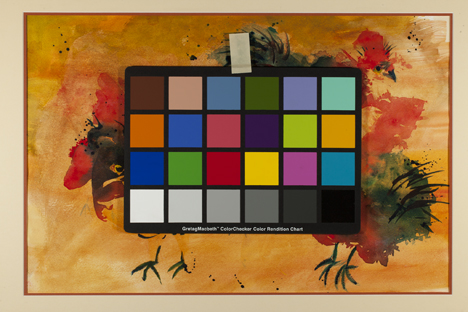 With the full-size X-Rite Color Checker on top of the painting, I made a series of exposures. From one of these I made a camera profile using X-Rite’s ColorChecker Passport software. I used that profile to open the file for reproduction (more on this in a coming blog).

While I was in the studio, I also photographed an X-Rite (Gretag) ColorChecker DC, which is the more complex 240-patch camera target that works with ProfileMaker Pro software. And, I threw in a Kodak Q-14 grayscale target just for fun.

With nearly every color target known to photkind, I had the test images in hand.

Then I made a series of carefully-bracketed images of Carlen’s painting, and declared victory. Or partial victory.

This was just the process of capturing the image. I still had to reproduce it!

…which I will describe in my next blog.

Brian Lawler is an Emeritus Professor of Graphic Communication at California Polytechnic State University, San Luis Obispo and currently Guest Professor at Hochschule München. He writes about graphic arts processes and technologies for various industry publications, and on his blog, The Blognosticator.
View all posts by Brian Lawler →
This entry was posted in Art, Color Management, Photography. Bookmark the permalink.